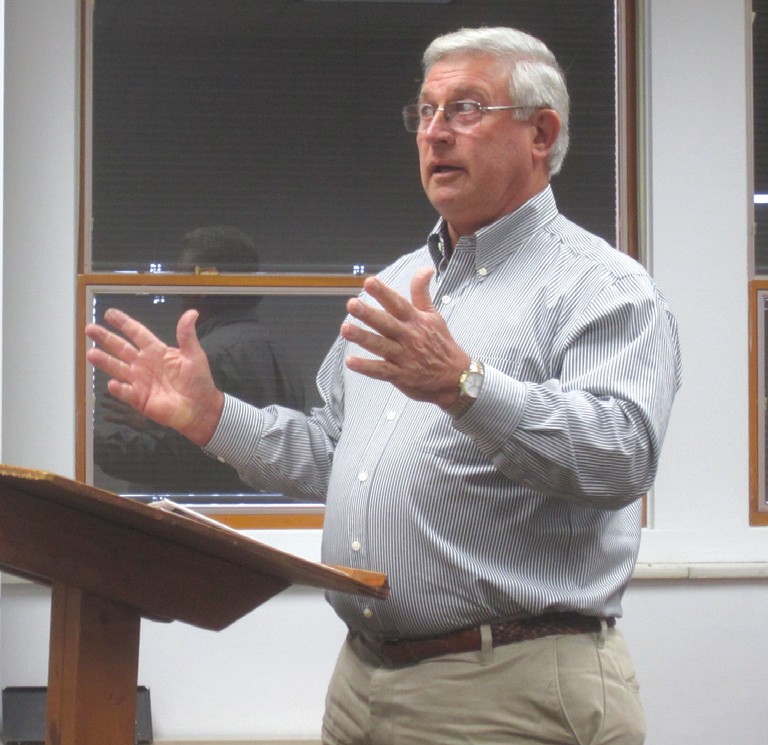 Economic development wasn’t on the Blount County Commission work session agenda Thursday, but it was perhaps the major subject of discussion. That sometimes happens at work sessions: citizens raise issues.

It began early in the meeting, right after the library report, when Hayden Mayor Larry Armstrong addressed the commission saying the county had been “called out” by Gov. Robert Bentley as the only county in the state without an economic development office.

(Ed.– Bentley’s comment was quoted from a remark he made to State Rep. David Standridge that he “believes Blount County to be the only county in the state that doesn’t have an economic development office.” The Blount Countian was unable to confirm the accuracy of the governor’s remark. Blount County appears to be one of only a few that do not have such an office, according to expert sources consulted. However, Bentley himself is a formidable source, having recently traveled the state on an economic development tour.)

Armstrong said he calculated he had driven some 780,000 miles commuting to jobs outside the county over his lifetime, and that other residents had commuted for years of their work lives as well, thus highlighting the need to create an economic development office to attract more jobs within the county itself.

“Somewhere, we’ve got to find the funds to do it,”Armstrong said. “Some mayors may be willing to help fund it. It’s time to do something.”

“You are right,” he told Armstrong. “The county has made one stab at it a couple of years ago that didn’t work out. (Ed. An industrial development board was reactivated by the commission in October 2008 after a period of several years’ inactivity. It was disbanded by the commission in March 2011 when it collapsed into ineffectiveness due to disagreement and infighting among board members and the executive director.) I have been trying over the last few weeks to come up with ideas to bring back to the commission to move forward on this again.” Review of ‘what has worked elsewhere’

Green then listed officials he met with recently, along with ideas on eco- nomic development that came out of those meetings – summarized in the bullet points below:

•determined that a successful model that has worked elsewhere is to form a non-profit corporation with a board composed of standing members in such areas of expertise as real estate, banking, and utilities, and geographic representation from around the county. Points to consider

If the group forms, it has to:

•decide how mayors may participate.

•take time to do the organizing job right to gain buyin from stakeholders throughout county.

•elect own officers, executive board, and create own by-laws.

•consider need to hire an executive director and devise a method to provide sustained funding.

Gov. Bentley has talked to the Alabama Department of Economic and Community Affairs (ADECA) and asked them to “help Blount County.”

District 2 Commissioner Carthal Self entered the discussion saying that a problem the county has is that it doesn’t have the business and revenue base to sustain the financial needs of an economic development office.

District 3 Commission Dean Calvert, referring to an earlier remark by District 4 Commissioner Gary Stricklin, said it’s important to create an organization that will last, but especially to determine “what the people want,” suggesting that not everyone may view economic development as an unconditional good. Some may value the quiet, rural ambiance that they moved to Blount County to find, or that they’ve enjoyed all their lives here.

Green concluded the lengthy discussion with this comment: “We’re facing an identity crisis in Blount County. If we decide what we want to do and get the majority behind it, we can succeed. We’ll face some opposition – people who don’t want to proceed down the path of economic development.

“Here’s the dilemma: either we develop economically to generate the public revenue to sustain our schools and our roads and add jobs – either we do that – or if we don’t, people must decide they’ll take on the burden of paying themselves for these services and necessities that they want. We’re going to change. Is it going to be the way we want to change – or not?”

The subject of economic development is not on the agenda for further discussion or decision at the November business meeting on Monday (Nov. 18) next week. It is expected that a public hearing will be called on the matter in the not-too-distant future. Such a follow up meeting was mentioned at the Aug. 29 evening meeting at the courthouse in which several county mayors initially requested that the Blount County Commission revive a formal, countywide economic development effort.

It seems apparent that Commission Chairman Green has been preparing for such a meeting.