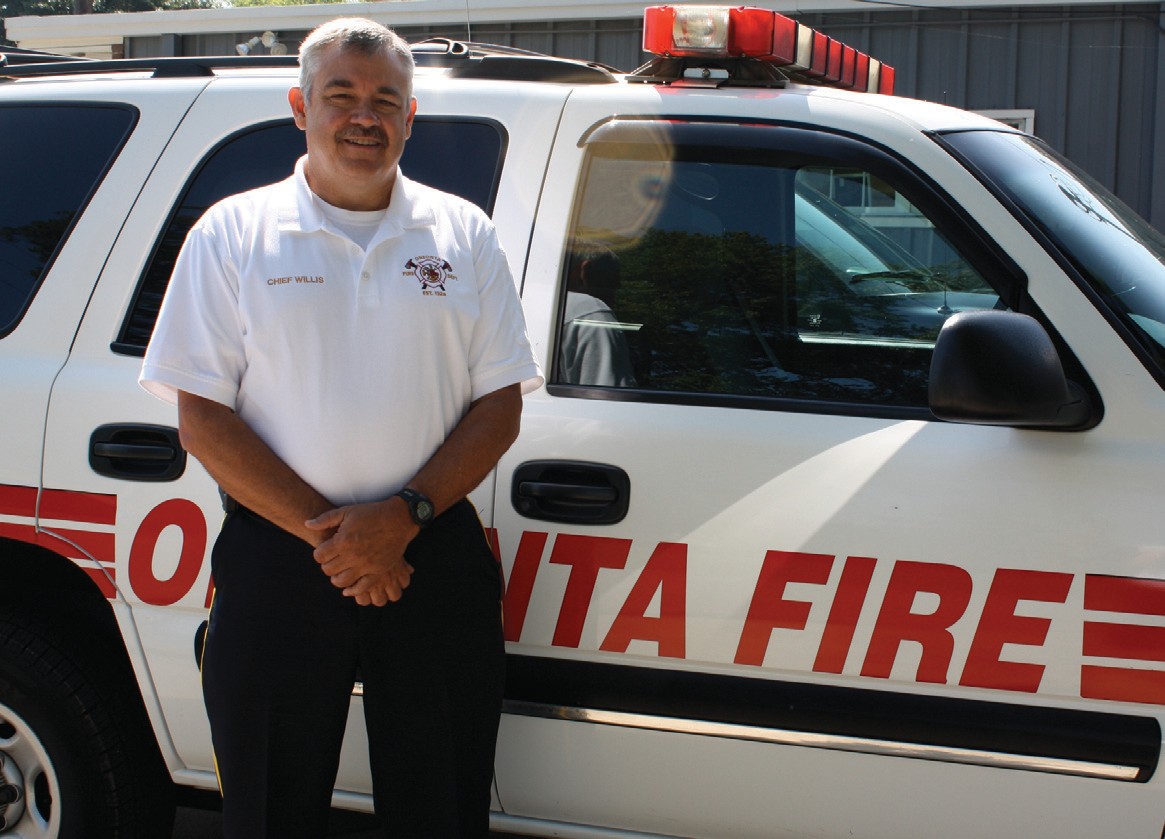 Arthur Willis is on the job this week.

When Arthur Willis was hired as the fire chief of Oneonta last month, his life-long goal was fulfilled.

As a teenager fighting fires in Lowndes County 30 years ago, Willis says he knew then he wanted to be a fire chief someday.

Years later that dream continued as he climbed through the ranks at Birmingham Fire and Rescue. He reached the position of assistant fire chief before he was given the Oneonta opportunity and he has now begun the retirement process from the department.

With approximately 640 personnel at Birmingham, the transition to a department with less than 20 employees may take some getting used to, however, Willis says the excitement of the firefighters in the department is contagious and he is thrilled about joining the Oneonta Fire Department.

“They appear ready to take direction, and I’m ready to give that direction,” Willis said. “Soon, I will meet with every individual and tell them who I am and what my plans are and I will then ask them to tell me who they are and what they expect. I want to begin building that relationship.”

At Birmingham, Willis says he saw the emphasis his fire chief put into the department being a family, and he wants to stress that outlook for Oneonta.

“It is important for us to be like a small family. I want to get to know them and their families personally so I can get a better understanding of who they are, and I want to improve that connection every single day,” Willis said.

The veteran firefighter received his chance to begin those relationships on Monday, his first official day, but Willis says he has been in and out of the station since he was hired by the Oneonta City Council during their meeting last month.

Already the Oneonta firefighters are buying into the new vision and adjusting positively to their new chief.

“I think Chief Willis will be a breath of fresh air,” said Lt. Scott Payne. “He has the skills to lead us, and we are embracing his new ideas.” Putting experience into action

When he first began interviewing for the Oneonta position, Willis says he was impressed by the intermingling of the city government.

“During the hiring process, the knowledge the government had of the department was tremendous. They know the department’s mission, and I left really hoping I would get the position.”

“Arthur brings a unique set of experiences,” Lowe said. “He started out on a truck, like many do, and he was able to climb that ladder from there. He was already planning on retiring from Birmingham and was looking for a smaller department to be a fire chief. The timing was perfect and his experiences were impeccable. We believe he will carry the department to the next level.”

Besides managing the fire station, Willis says his future plans for the department include professional development, community participation, and public education and prevention. Professionally focused

“I want to continue that development with training and skills because those constitute a better outcome,” he says. “They are eager to learn and train. You only get one shot to make a first impression, and we will make sure we are presenting ourselves professionally in every aspect.”

Willis has had his fair share of different aspects and scenarios while working in Birmingham.

Willis says with one shift at Birmingham, he might have to fight three fires.

“The exposure I got there is almost unprecedented. In Oneonta there may be six fires a year,” he said. “I hope my operational and administrative experience and knowledge made me stand out during the interviewing process and those skills were a key factor in their decision.”

Willis not only has a mile-long checklist of firefighting experience, he also holds two degrees – a bachelor’s from Auburn University in agricultural economics and a bachelor’s from Athens State University in public safety administration. Willis received his associate degree in fire science from Jefferson State Community College and is a certified paramedic.

“I’m interested in continuing my education even further, maybe even working on a master’s degree, but right now I’m 100 percent focused on my time with Oneonta Fire and Rescue,” he says. A staple in the community

Willis is looking to improve the fire departments’ relationship with the community while offering public education and prevention.

“I love Oneonta. It’s a small-town atmosphere with big city amenities,” he said. “I want people here to know who we are and call us by name.”

He says he plans for the department to begin making appearances at local festivities such as the Covered Bridge Festival.

“I really want Oneonta Fire and Rescue to be involved,” he said.

With only a few days on the job, Willis is already concerning himself with the community and their fire awareness.

“On average, there are 13 fire deaths a year in Birmingham, we want there to be none here for the next 50 years,” he said.

He says the process to teaching the public will begin in local libraries. He said he looks forward to reading the book, No Dragons for Tea, a children’s book that explains the importance of “get out, stay out” during a fire, to area students.

“People have grown up learning certain fire safety tips such as ‘stop, drop, and roll,’ however, ‘get out, stay out,’ is another important saying to remember,” according to Willis.

“We had that happen to a child in Birmingham,” he said. “He was out of the house, but then he went back in and perished.” Community-involved family man

Currently, Willis resides in Ashville, but he says he will be moving closer to the Oneonta area in the near future, and says he is already working on becoming familiar with the community.

He has three children – his daughter, Taylor Allred, 21, is a teacher; Cody, is a student, 20; and his oldest son, Zachary, 23, is a firefighter with Birmingham Fire and Rescue.