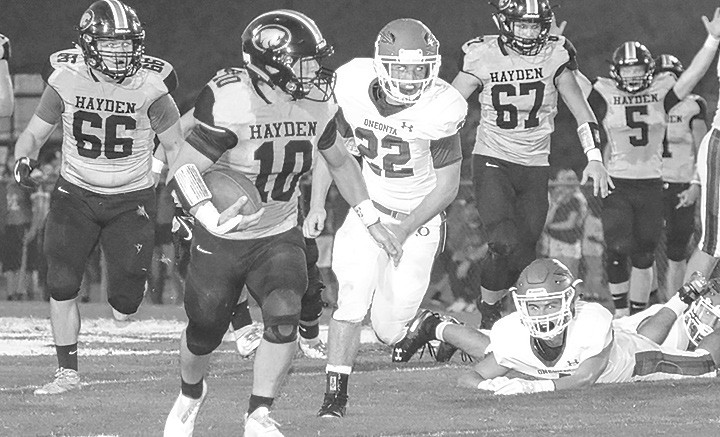 The Wildcats proved their toughness Friday, upsetting the Redskins in a 17-14 victory. The Wildcats scored first at the end of the first quarter on a 3-yard touchdown by Cole Goolsby, making the score 7-0.

Oneonta returned the favor early in the second quarter with a 66-yard touchdown carry from David Hall, tying the game at 7-7. The Wildcats then blocked a punt by Beau Ragsdale, scoring on the recovery, making the score 14-7 in the Wildcats’ favor, which would be the score at the half.

The Redskins struck first after halftime, scoring on a 10-yard touchdown pass to Riley McGill from Brody Pinyan, once again tying the game at 14-14.

Hayden wasted little time taking the lead back, kicking a field goal early in the fourth quarter to make the score 17-14. The Wildcats held on to the lead until the end, where a missed field goal by the Redskins sealed the win for the Wildcats.

For the Wildcats, Goolsby rushed for 42 yards and a touchdown, and Evan Orr rushed for 51 yards. Andy Woodard and Jason Witt contributed an interception each to the Wildcats’ defense.

The Wildcats secured the win this week and hope for similar results next week as they travel to Lawrence County. The Redskins visit Cleburne County. Both games kick off Friday at 7 p.m.