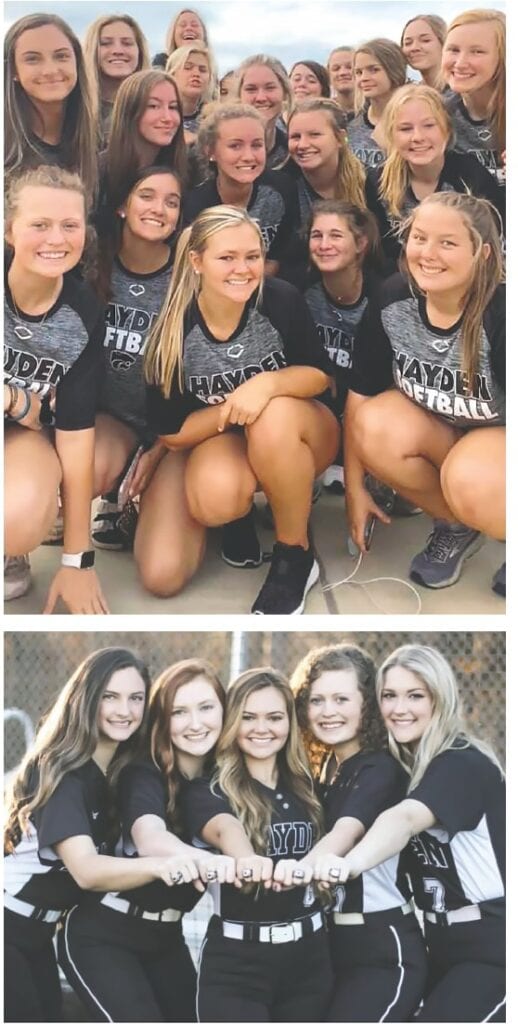 Hayden outscored their opponents 23-5 in the 5A North Regional, getting stronger with each game before finishing off Ardmore 12-0 as the north’s top qualifier. Building on that momentum, the Wildcats entered the 5A State Tournament ready to take on the third-ranked Elmore County Panthers, who came out of the West Regional as the number two qualifier.

The Wildcats struck first. Lindsey Smith led off the game with a fly ball single to second and then stole second. Taylor Yeager then walked. Becca Benton drove Smith in on a line-drive single to left field to put Hayden on the board 1-0. Hayden left Benton and Yeager stranded after the next three batters got out. In the bottom of the first, the Panthers got a couple of runners home to go up 2-1.

In the second inning, Alyssa Jinright reached on an error and advanced to second on Miah Simmons’ sacrifice hit, but that’s where she remained after a strike out ended the inning. The Wildcats didn’t get another runner on base until Benton’s line-drive single to left field in the top of the sixth. She took advantage of a passed ball to get to second, but the Wildcats couldn’t get her home.

Defensively, the Wildcats shut down Elmore County for the rest of the game. Neither team scored another run as the Panthers held on to win game one 2-1.

Simmons got the start and pitched six solid innings. She allowed just two runs on three hits, striking out five. Both runs were unearned. Benton led the Wildcats at the plate going 2-for-3 with one RBI. Smith had the Wildcats’ other hit and scored their only run.

The loss set up an elimination game with Sardis, who lost 2-4 to Satsuma in their first game. After falling behind 1-4 through the first four innings, Hayden got hot in the fifth, scoring two runs. The Wildcats added three in the sixth to take the lead and another six runs in the seventh for a decisive 12-4 victory.

Hayden’s first run came in the top of the third. With one out, Smith homered on a shot to left field to put the Wildcats on the board.

Smith also got the Wildcats’ rally started in the top of the fifth when she led off with a triple. She scored on Benton’s ground out. Ansley Armstrong walked on a 3-1 count and advanced to second on the first baseman’s error. Olivia Armstrong drove her in on a line-drive single to center field. A single from Kiley Weston put runners on first and second, but a third out strike out left them stranded.

In the top of the sixth, Tinley Johnson led off the inning and landed safely on first after an error on the shortstop. She advanced to second after tagging up on a caught fly ball off the bat of Simmons and then stole third. Smith walked to put runners on the corners, but not for long. With Yeager at the plate, Johnson stole home to tie the game at 4-4. Smith advanced to second on the steal and then stole third. Yeager then took first after getting hit by a pitch. Benton drove in Smith after she tagged up on the sacrifice fly and Yeager made it to third. A. Armstrong drove in Yeager when she doubled on a fly ball to center field for the third run of the inning and a 6-4 Wildcat lead.

To start the seventh, the Wildcats loaded the bases after singles from Weston and Johnson and Gabby Knighten’s walk. Simmons then doubled on a line drive to left field scoring all three runners. Hayden brought in Allie Bryant as a courtesy runner for Simmons. She advanced to third after Smith singled on a ground ball to left field. Yeager drove in both runners on a line-drive single to center field and scored the game’s final run on Benton’s grounder to center field.

Savannah Painter started in the pitcher’s circle for the Wildcats. She surrendered two runs on one hit in one inning pitched. Aubrey Gunter pitched a couple of innings in relief giving up two runs on four hits and striking out two. Simmons pitched the final four and got the win. She gave up two hits and zero runs while striking out two.

Hayden racked up 15 hits. Smith led the way with three hits, four runs, and one RBI. Yeager, Benton, Weston, and Johnson recorded two hits apiece while A. Armstrong, O. Armstrong, Jinright, and Simmons each had one hit. Benton and Simmons drove in three runs, Yeager drove in two, and O. Armstrong drove in one.

The win kept Hayden’s season alive and set up a rematch with sixth-ranked Ardmore. Despite outhitting Ardmore 10-7, the Wildcats could get only one runner home as they fell 1-2.

Hayden got on the board in the top of third inning. Simmons led off with a single on a line drive to left field. The Wildcats brought in Kylie Christopher as a courtesy runner for Simmons. She advanced to second on a line drive off the bat of Yeager. Both runners advanced after tagging up on Benton’s pop-fly out. Christopher then scored on an error by the third baseman to give them a one-run advantage.

Simmons pitched a complete game allowing two runs on seven hits with two strike outs. Only one of the two runs was earned. Yeager, Knighten, and Simmons led at the plate with two hits. Benton, O. Armstrong, Weston, and Johnson each finished with one hit. Christopher scored the only run.

The loss was the end of the road for the Hayden Wildcats. They finished the 2021 season at 26-12-1 and just a few games shy of an opportunity to play for a second straight championship. Seniors Olivia Armstrong, Kailee McCombs, Savannah Painter, Lindsey Smith, and Taylor Yeager leave with a state title, several individual accolades, and many wins from the time they put on varsity uniforms. They’ve won every Blount County tournament they’ve played in and they’ve won every area tournament they’ve played in. They leave a strong legacy and their impact on the Wildcat program will be lasting.