Who’s been digging in my yard? 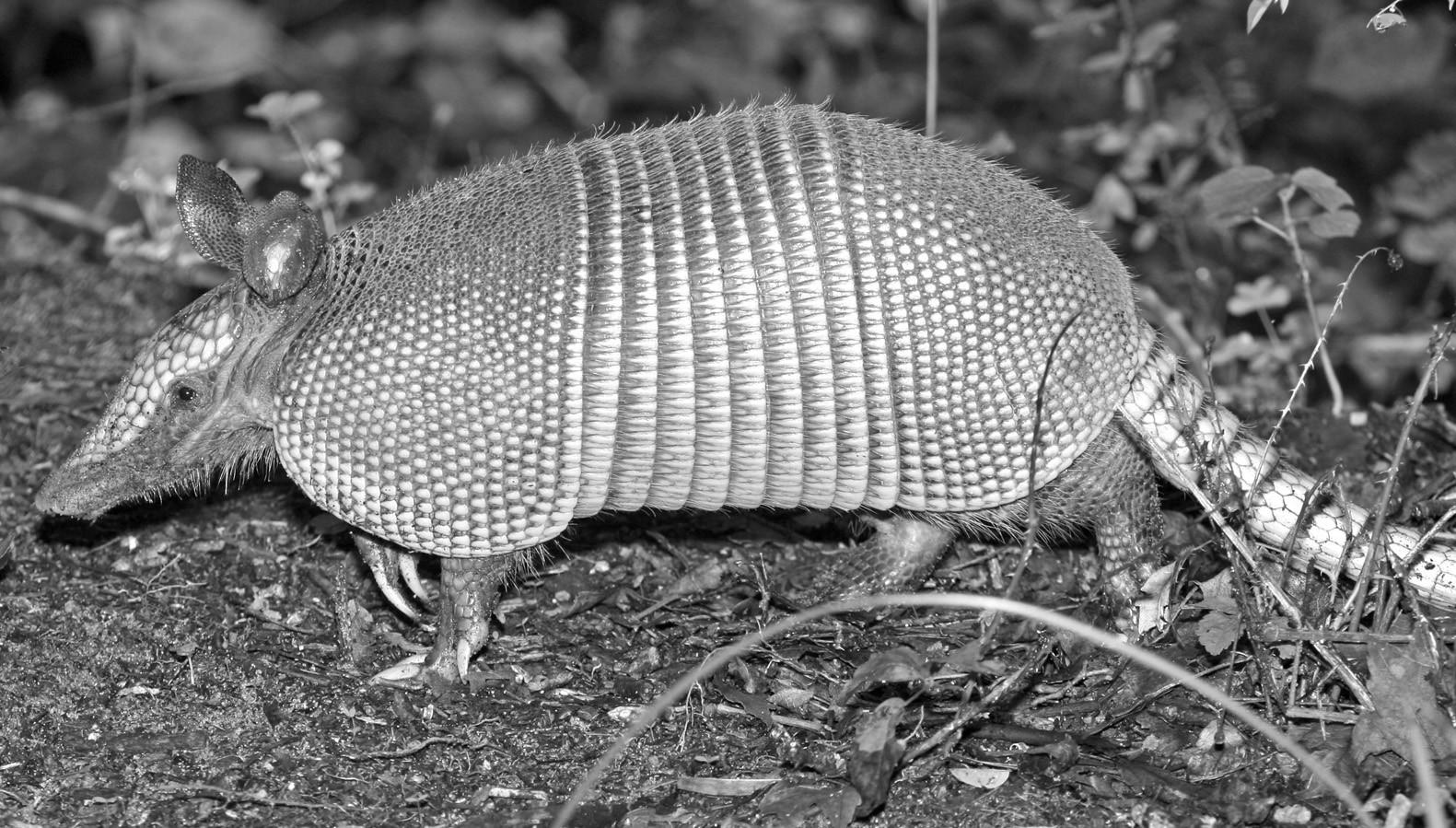 Have you ever walked out into your wellkept yard and found the sod dimpled by a multitude of cone-shaped craters several inches deep and wide? How about mulch around shrubbery plowed up and scattered or small plants in your garden destroyed and the entire area looking as if rooted up by hogs? If so, you likely have been visited by a nine-banded armadillo (Dasypus novemcinctus). This species is one of about 20 existing species of armadillo originally from South America. The nine-banded armadillo is the only one of these species found in the United States.

The armadillo is about the size of a house cat or opossum, but pound for pound, it can do nearly as much damage as a feral hog when it comes to digging up the yard. The nine-banded armadillo belongs to the order Cingulata, which also includes the anteaters and sloths of South America. A big part of their diet consists of beetles, grubs, earthworms, and other soil insects and invertebrates. These food items are what attract armadillos to lawns, flower beds, and gardens. Armadillos locate these subterranean animals with extremely keen senses of smell and hearing. Prey is unearthed with large claws on short, stout legs specifically adapted for digging, and are captured with thick, sticky saliva on the armadillo’s tongue.

The armadillo’s voracious appetite for insects is not all bad. Many of the creatures they consume are lawn and garden pests that can do considerable damage to yards and gardens. It is common to see a crater in the top of a fire ant mound where it has been dug open by an armadillo searching for ant eggs, developing larvae, and adult ants.

Armadillos are known locally by many other common names. The bony plates that cover and protect their bodies have led to descriptions such as “armor-plated opossum” and “opossum crossed with a turtle.” Although not closely related to any of these animals, these common references to their appearance are fairly close to the technical description. Their family name Dasypodidae roughly translates to “Turtle-Rabbit.”

The natural fright response of the armadillo when startled is a vertical leap before fleeing, a dangerous reflex when approached by a vehicle that might otherwise pass over without harm. This fatal trait spawned the nickname “hillbilly speed bump,” and made them a frequent highway casualty.

Before 1850, armadillos were not found north of the Rio Grande River except for fossilized evidence of extinct species. Because of a combination of factors, such as human colonization with its accompanying habitat alteration, extirpation of large predators, and intentional release or escape of captive animals, the armadillo has rapidly expanded its range at a rate 10 times that considered normal for mammals. Now abundant throughout most of Texas and other southern and southeastern states, armadillos have been observed as far north as Illinois and Nebraska, and westward to Colorado. Because of its abundance and wide distribution, armadillos have become a nuisance to many homeowners in suburban and residential developments, especially where wooded areas with favorable burrowing and nest sites are included or nearby.

Controlling armadillos on your property is not an easy task. In many cases it might be better to tolerate the occasional visitor than to take on the expense and possible collateral damage of control attempts. If frequent and serious damage is occurring, some action may be necessary. Removing individual animals by trapping and relocation/elimination, use of repellents, fencing of specific areas (fencing must extend below ground), and control of soil insects and invertebrates with pesticides to minimize food sources are some of the methods most commonly recommended.

Any method used has its limitations, with practicality, environmental pollution, and long-term effectiveness being major concerns. Whatever method is used, whether mechanical or chemical, be careful to do so in a manner that minimizes danger to people, pets, or desirable wildlife, birds, and fish.

If handling of the animal is involved, either for relocation, consumption (yes, armadillo meat is edible), or disposal, be aware they can on rare occasion be infected with leprosy, which may be communicable to humans by contact or by eating undercooked meat. Handle the animals or meat with sanitary and culinary methods as you would any wild game to prevent contracting communicable diseases that may be present. Photos and detailed descriptions of control techniques and equipment can be viewed on numerous web sites by using search engines.