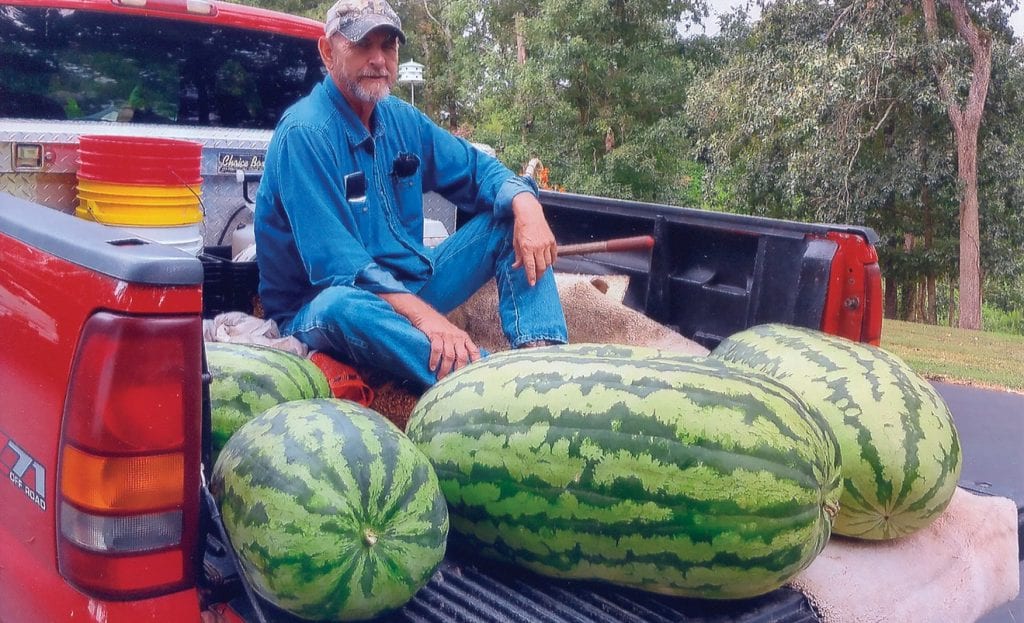 Several years ago Wynnville’s Freddie Kent was in Marvin’s and noticed a watermelon seed pack that alleged the melons could grow up to 240 pounds. He decided to buy the eight-seed pack of Carolina Cross watermelons and give it a try.

Kent has had some pretty amazing watermelons since purchasing that seed packet. In past summers, he has grown melons that weighed 104 pounds, 92 pounds and 96 pounds.

This summer, Kent planted seeds he stored in the freezer from the first year’s harvest. He carefully babied the plants as they grew and ensured that each vine only had one bloom so that the one melon could receive every bit of nutrition provided.

When asked what was the key to growing watermelons of this size, Kent said, “The main thing is to have a lot of patience. You have to baby the plants. I like watching them grow.”

Kent admits this summer’s weather has been kind to the melons. A fair amount of rain, along with the hot weather, has provided almost ideal conditions. To keep coyotes out, Kent said he put nylon fishing cord around his watermelon patch, which is located on “The Bluff” near the Etowah/Blount county line off of County Highway 41.

As the melons grew this year, Kent had hopes of producing his largest watermelon yet. Last week, when it was time to harvest the melons, he contacted James Blakely to weigh the melons on certified scales.

He did it. The largest melon weighed in at 114 pounds. He also had one that weighed 90 pounds. Kent had thought the 114-pound monster would have weighed more than 130 pounds; however, that simply was not the case. Still, he has been pleased with his crop this year.

Kent harvested his masterpieces by hand using a tarp and two strong men. He plans to enter his prize possessions in the Blount County Fair in September. Until then, he is keeping them safe in a well-ventilated trailer.