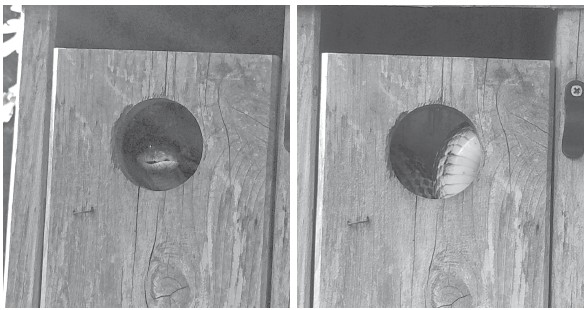 Left: Peek-a-boo. I see you. Despite our best efforts, snakes will sometimes invade bluebird houses (right) looking for an easy meal.

Yes, I am a bird lover! When you sit in the woods for hours upon hours you begin to notice all the creatures around and how they interact.

Birds are fascinating animals. I was sitting very still one morning in my deer stand and had a camouflage toboggan on my head. A Coopers hawk made a beeline for my head! I don’t know what he thought I was, but I had to wave my hands in front of my face to keep him from striking me.

I have had wild turkeys fly right by me as they came into the woods to feed. They were huge and sounded like a B-52 as they came by.

I am constantly amazed at how intelligent crows are. When I had pecan trees in my yard, they would always wait until I left to go to work before they would show up. Every now and then, I would go in late and, sure enough, about thirty minutes past time for me to leave, here they would come. More on crows later.

I remember the first Eastern bluebird I laid eyes on. When I was just about six years old, I was at my grandfather’s farm. He had cherries, pears, plums, and lots of other fruit trees in the yard. He asked me to follow him and I did. He led me over to a plum tree and in the tree was a gourd that had been hollowed out so the bluebirds could use it as a nesting place. There were about three baby bluebirds in that gourd.

Now that was a special day for me and I have never forgotten it. Years later I would own that house and the first thing I did was put up bluebird nest boxes.

In the ‘60s, bluebirds were fairly scarce. Being cavity nesters, they had few trees to nest in because many of the forests had been cleared for crop land and pasture. As people learned more about the plight of the Eastern bluebird, they began to put up nest boxes. Some even established bluebird trails which meant that folks put up a number of houses and would check on them regularly, counting nesting pairs, eggs in the box, and collecting other types of data. These efforts have paid big dividends. Bluebirds are everywhere in good numbers all across Alabama. Last week Extension hosted a forestry camp for youth and one of our projects was to build a bluebird house for them to take home.

To be successful in attracting bluebirds to your home there are some things you need to remember.

They are territorial. Nest boxes need to be at least 100 yards apart, or there needs to be a structure, like a garage or barn, between the boxes.

They need to be five to six feet off the ground. I like to face my boxes East due to weather concerns.

Nest boxes have very specific dimensions in construction and the entrance hole needs to be 1.5 inches in diameter. Perches are not recommended because they attract unwanted species.

The perfect place to mount a nest box is on a metal pole so that snakes and bird-eating mammals can’t get to the baby birds. Other protection devices include sheet metal guards, PVC guards, or placing sticky material on the pole. Anything to keep the snakes and other predators away will increase the chances of being successful.

Sometimes even our best efforts will not prevent loss of the nestlings. Recently a snake made a meal of baby bluebirds at our house in Blountsville. I hate it, but the snake is just doing what it is programmed to do. They have to eat too!

All that you want to know about bluebirds can be found on the Internet: nest box plans, placement of the boxes, everything to help you become successful in attracting the birds to your home. Your efforts in attracting bluebirds will be rewarded with a song of pure joy early next spring. It will put a smile on your face when you hear them. I’ll guarantee it!