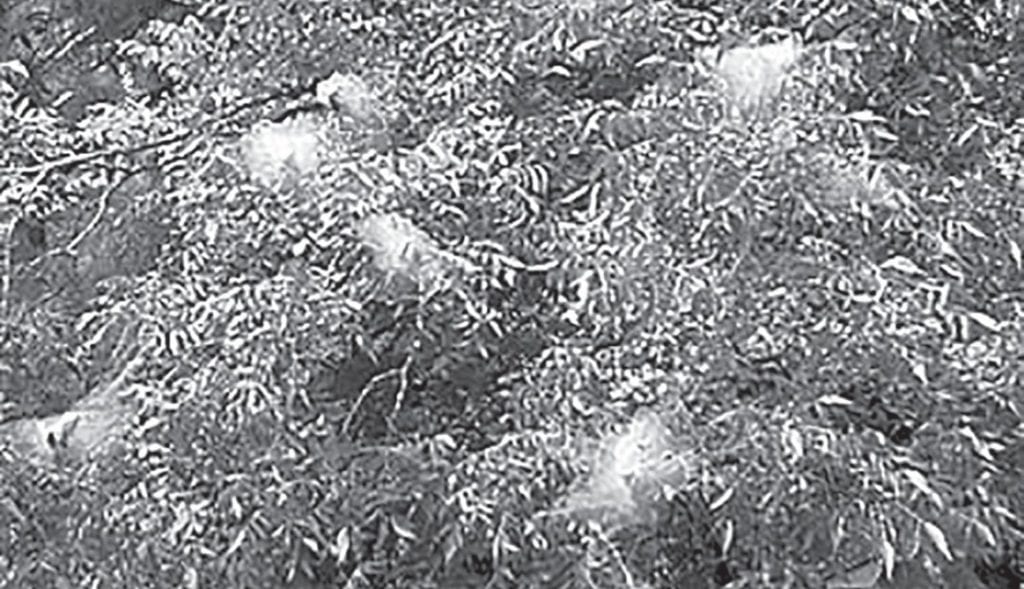 Fall webworms in a pecan tree.

I always wanted to live in the woods and got my chance when I purchased my home in Blountsville. Most of the lot is covered in white oak and various hickories with an ash or beech thrown in for good measure. After 20 plus years of raking leaves, sweeping leaves and caterpillar poop off of decks and my drive, I’ve changed my mind. Now I just want to know someone who lives in the woods, so I can go visit for a while, get my fill of bird calls, and katydid singing, and go to the house!

There is something falling out of those trees year round. It starts off with expended catkins (male blossoms) in the spring, then progresses to caterpillar poop from April through October, followed by acorns and other forms of seed, followed by leaves. Then, to add insult to injury, I get to pick up all the twigs in late October and November that the twig girdler sawed off in late summer/ early fall. It makes me tired just thinking about it! I love the trees and they are a tremendous help on the power bill every summer, so I guess it all works out in the end.

I get several calls this time of year about trees being defoliated by caterpillars.

Let me put your mind at ease right off the bat and say that they pose no threat to the tree. This relationship between the leaves of certain trees, and the caterpillars of certain moths, has been going on forever, and they are both still here. Sure, they may impact the aesthetics of your tree but that is about it.

You may apply insecticides to small trees, but there aren’t many options when it comes to our larger ones. My recommendation is “just don’t worry about it.”

Fall webworms show up in my pecan trees every year. They build their web on the terminal end of a branch and will defoliate the leaves within the “nest.” They may have up to four generations a year, and I am already seeing them in trees this year. Other than being unsightly, they pose no threat to you or the tree. They utilize most of our tree species with the exception of conifers.

There are two races of this species, the redheaded and the blackheaded. Here in Blount County, the blackheaded fall webworm is the first to reproduce and may do so as early as May. The redheads will follow about a month later. Next time you encounter this species, look closely to see which you have. You may have both at this time of year in the same tree. If they were a little larger they would make good fish bait.

Several species of oakworms may be working in your trees from time to time. You may not notice or see the caterpillars; you may just notice the frass (poop) that you have to sweep up. These usually have two generations per year, one early and one later in the season. Like I mentioned before, there is always something falling out of the trees, plus the birds need something to eat.

Tussock moths produce caterpillars that are uniquely hairy, and may be somewhat colorful. Some folks may mistake these for “stingers” but they’re not. They feed on a wide variety of deciduous trees and conifers. There were several of these crawling around the deck in Blountsville recently. I know they were feeding on the oak and/or hickory trees, but we didn’t notice any defoliation.

Driving one early spring morning several years ago, as I neared the Marshall County line on Ala 79, I noticed the trees on the ridge to the south, looked as if they had been stripped. I just assumed that a late freeze event had knocked the leaves off. Later I learned that it was loopers and spring cankerworms that had defoliated those trees. That was, and still is, the most damage I have ever noticed from caterpillar defoliation. Once that generation matured, they moved on and the trees recovered in short order.

I am not an entomologist by training, but I do find the insect world fascinating. The point I want to make is that most defoliators pose no threat to your trees. However, there is one caterpillar that we don’t want in Alabama. It is the gypsy moth caterpillar.

It is an invasive species and it will cause major issues if it arrives. I captured one gypsy moth in the county several years ago and there have been a few others captured in Alabama. They will arrive here via vehicles coming into the area from the northeast, where they are well established. They’re not good fliers but may catch a ride on trains, trucks, boats, and other means of transportation. If you ever notice a major defoliation event that you think is abnormal, give me a call and we’ll check it out.