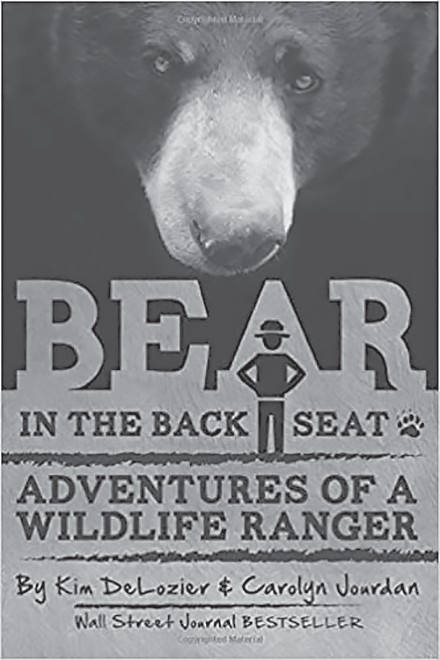 Bear in the Back Seat: Adventures of a Wildlife Ranger

by Kim DeLozier and Carolyn Jourdan

Imagine you are standing in the Great Smoky Mountains. You see a frightened deer bound out of the woods into a clearing. Seconds later you see just exactly why the terrified deer is running for its life as a black bear clears the tree, stalking its prey. What do you do?

Kim DeLozier, in his early days as a wildlife ranger in the Great Smoky Mountains National Park, encountered this scene, and his first instinct was to imitate another deer sounding a series of high-pitched blowing sounds. This is the signal used by deer to warn others about danger. He hoped to distract the bear long enough for the deer to escape the clutches of the hungry bear. I know what you are thinking. This was a bad idea. You would be correct. As Kim soon found out, imitating a deer only makes the bear think that you would make a much easier and possibly tastier meal.

As the bear approached Kim, he did the only thing he could think of… he began talking to the bear. “Bear, it’s me. I shouldn’t have done what I did, I’mmm sorry.” He talked louder and louder as the bear inched closer. Finally, he shot two rounds from his shotgun in the air. The bear bobbed his head a couple of times and retreated back into the vegetation.

This book contains a collection of Kim’s many adventures as a wildlife ranger in the Great Smoky Mountains National Park. You will run the gamut of emotions as you hurriedly flip from chapter to chapter. This book has bears, wild hogs, lightning storms, and just about anything nature has to offer.

My thoughts: My wife and I recently took a trip to the Smoky Mountains. We were struck by the beauty of that area as we drove into Cade’s Cove and back and forth between Pigeon Forge and Gatlinburg.

At one point in our trip, we encountered a great deal of traffic bypassing Gatlinburg. Cars were pulling off to the side of the road, and people were leaving their vehicles to gaze into the valley below. We could only assume that someone had spotted a bear in the valley.

I couldn’t help but think about Bear in the Back Seat and Kim DeLozier’s many adventures as a wildlife ranger. I also hoped that no one would imitate a deer. We know from DeLozier’s book that you could easily be mistaken for a deer and a tasty bear snack. As is always the best practice in the Great Smoky Mountains, admire the wildlife from a distance and never feed the wild animals.