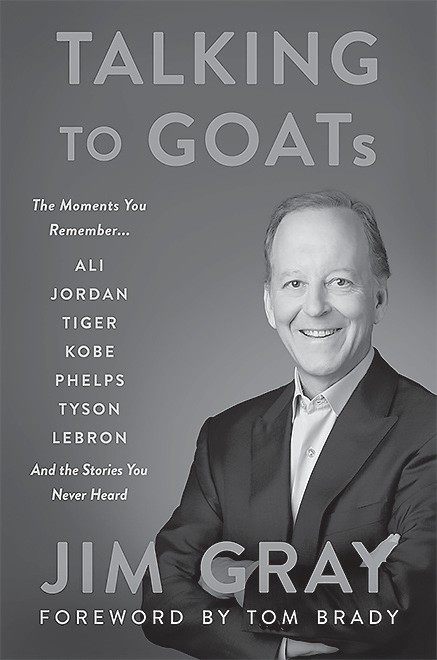 Talking to GOATs: The Moments You Remember… and the Stories You Never Heard

Close your eyes and imagine the static of a radio, the warm glow of a television, or the adrenaline pumping through your veins as you sit in a stadium surrounded by thousands upon thousands of fans. Whether it is football, baseball, basketball, boxing, golf, or horse racing, we can all relive those moments where we watched (or listened to) some of the most memorable moments in sports history. We experience those moments from the sidelines because we don’t necessarily know those athletes. We are simply fans of the sport.

Jim Gray, a notable sports broadcaster, actually lived some of the greatest moments in sports history. He knew the participants. He interviewed them, and now he has written a book chronicling those moments, so that we, the fans, can live them, too. Some of us may have watched Mike Tyson bite off a piece of Evander Holyfield’s ear. Some of us only know about it because of YouTube clips. But Jim Gray was there. He saw it happen in real time, and he was the one who interviewed Mike Tyson after the fight.

Talking to GOATs [greatest of all time] takes us behind the scenes with personalities like Muhammed Ali, Michael Jordan, Tiger Woods, Kobe Bryant, Mike Tyson, Lebron James, and even Michael Jackson (yes, you read that right). Jim tells us about the moments that are now a part of history, but he also gives us a glimpse of the people behind those moments and what they were like.

My thoughts: I loved this book because I remember certain moments in sports history. I remember sitting in my living room with my dad as the Boston Red Sox became the first (and only) team to come back from a three-game deficit in the 2004 ALCS. I remember watching (in disgust) as Auburn returned a missed field goal to beat Alabama in 2013. Those are the moments we sit in awe as we watch sports history being made right before our very eyes. If you are a fan, you will love this book. My favorite portion of this book is the chapter entitled “First Pitch.” This is the story of George Bush’s pitch at a New York Yankees game after Sept. 11, 2001. We think of sports as something that divides us because I like this team and you like that team. But as Jim shows us in this chapter, sometimes sports actually bring us together. You may not have been a fan of the New York Yankees or of the policies or political affiliations of George Bush on Oct. 30, 2001, but on that day, our president threw a perfect strike and brought everyone together with chants of “USA! USA! USA!”

Ricky is director of the Oneonta Public Library. Visit the library from 9 a.m. to 5 p.m. Monday through Friday. Call 205- 274-7641 to reserve this or another great book.