WHAT IS DRUG COURT?

Something different this way comes 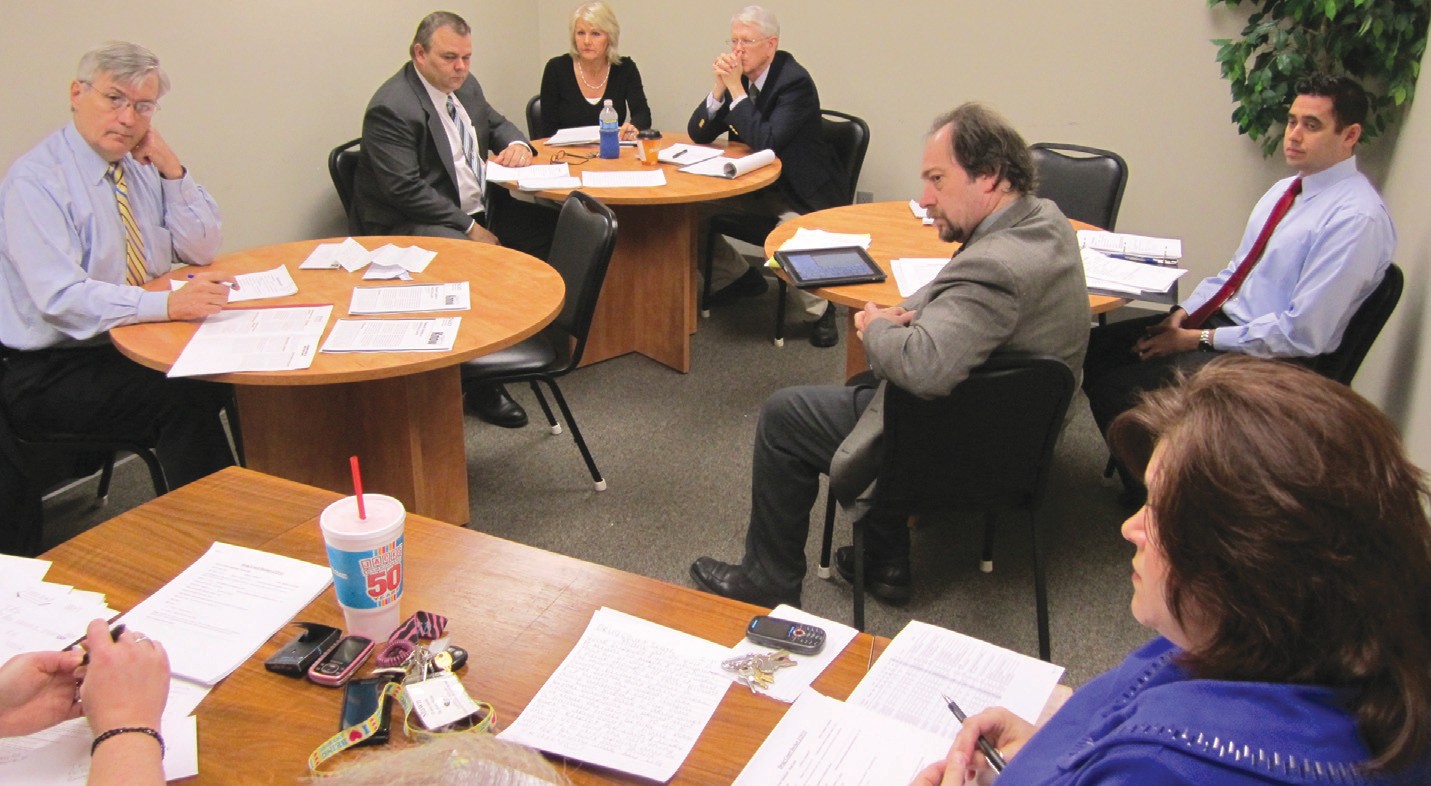 A drug court work session in progress. If this photo seems unexciting, consider the implications if it were your name rather than Melvin Propst’s (fictitious) that these nine people are so soberly discussing – with a view toward deciding whether you will be congratulated or sent to jail later this day. The work session drives the drug-court process and determines what happens with each case on the drug-court docket.

Drug court. It’s called court, but it’s different from any other court you’ve ever seen or heard of previously. How so?

Traditional courts are mainly about establishing innocence, guilt, or degree of guilt and assigning appropriate punishment. Those concepts aren’t foreign to drug court, but the main focus, rather than punishment, is rehabilitation. Punishment isn’t unknown, but it’s generally the last resort.

The emphasis instead is on complete recovery from addiction or substance abuse – the kind of recovery that allows a person to assume his or her intended role as a productive worker, solid citizen, and responsible family member.

Perhaps the biggest difference is the attitude of the court. For traditional court, the needs of society, or the state, are paramount. The needs of the individual are distinctly secondary. “Commit the crime, do the time” is the attitude implicit in the process. What happens to individuals afterwards is their own concern. Perhaps there is the assump- tion that individuals will learn their lesson from punishment by incarceration, but that’s not the court’s overriding concern.

With drug court, the hope is that all will succeed, and the program is structured toward that end, although the requirements are difficult and outlook is realistic. Some will fail. Still, the orientation of each member of the drug-court team is basically optimistic and dedicated to encouraging success, even when it takes the form of reluctantly but diligently penalizing failure. From the outside, it strikes the observer as a toughlove parental philosophy.

Hearing that is one thing. Believing it is another. Maybe it’s one of those things you have to see to believe. That’s the purpose of this article: to help you see it, at least at second hand. Other aspects of drug court will be examined in subsequent articles.

First, let’s look at how and why drug court is supposed to work.

It’s immediate. Mistakes and failures to abide by program requirements are caught and penalized immediately, usually within the same week the violation occurs; success likewise is rewarded immediately.

In contrast, under traditional probation for drug offenders, violations may be months old by the time a court hearing on the violation is scheduled and held. New offenses may have been committed and the offender’s entire life situation may have changed in the meantime.

Good behavior is rewarded. It uses both negative sanctions and positive incentives. Consequences – good or bad – are certain and immediate.

Incentives for good behavior? There’s no time for that in a traditional court setting. Incentives may sound like a bleeding-heart technique, but they work. They contribute to success, particularly to attitude improvement, one of the closely watched indicators of overall improvement.

It’s long term. The program is designed to take a full year in the best of all possible circumstances. It usually takes longer. Graduation in one year requires passing a weekly random drug test for 52 consecutive weeks. If clients fail a drug test, they go back to the beginning. They must pass 52 consecutive random screens, no matter how many they passed before the failure occurred. A no-show for a test is counted as a test failure.

It’s life altering. One consequence of program length is that it provides the time to change many of the routine habits and circumstances of the client’s life. Those habits are crucially involved in sustaining drug abuse. Old habits die hard, but the program of intensive therapy, community work, sanctions, and rewards over an extended time puts persistent pressure on self-destructive behavior to change for the better.

Chief among these are personal lifestyle habits, emotional habits, ways of thinking, values and attitudes, and friendships and acquaintances. The last are especially important because it’s a person’s circle of friends and acquaintances in most cases that helped initiate drug abuse behavior in the the first place and encourage and sustain it over time.

It’s custom-tailored – to individual needs, foibles, life situations. There is latitude for flexibility to accommodate individual situations, but excuses for repetitive failures to meet the letter of program requirements are not tolerated; sanctions result whenever a one-time reason threatens to become a repetitive excuse for failure.

Attitude counts. Without making too much of this variable, it’s one of the most frequently mentioned in work-session discussions of a client’s progress. It undergoes a typical progression from negative to neutral to positive over the initial weeks of the program.

It’s specifically tracked in each work session. E.g. “How is Melvin’s attitude this week? Is he starting to ‘get it’ or not? What about his class participation? Does he take an active part in discussion, or sit there like a bump on a log?”

Clients must not only meet formal program requirements; they must show emotional progress as indicated by their attitude toward drugcourt members they come into contact with. They have to buy in to the whole program to get the gold star of drug-court team-member attitude approval: “It’s awesome,” or “He’s the poster child this week.” Work session key to process

If you had only one hour to figure out how drug court works, the best way to spend it would be to sit in on a drug-court work session. That’s the meeting that immediately precedes the 1 p.m. Friday drug court session, The work session takes place for an hour to 90 minutes every Friday morning. It’s what drives the entire drug-court process and determines what happens with each individual case on the court docket.

The work session is a group meeting involving all members of the drug-court team. The team usually consists of the judge and judge’s assistant, a prosecutor, a defense attorney, a case manager, a narcotics officer, an intensive outpatient group sessions coordinator, a substance-abuse-testing coordina- tor, and a community corrections coordinator who is the overall program director.

In roundtable-discussion fashion, participants give input on each client’s status, progress, attitude, and current needs: client by client, name by name. Discussion begins and centers around each client’s progress toward meeting the week’s requirements. Requirements: they’re serious

For phase one clients (the first 12 weeks of the 52- week program, which covers the majority of Blount County’s drug-court clients), meeting requirements means the following:

performing several hours of community service, which must total 50 hours over 12 weeks.

showing up at least once a week on short notice for a random drug screening.

reporting in at least once, more often if required, to the case manager to note status for the week and to discuss any outstanding problems – or successes – they are experiencing.

appearing in court every Friday for feedback – in the form of sanctions, encouragement, sometimes even rewards – on all of the above.

Including the Friday afternoon court appearance, that’s a total of at least six appearances weekly the client must make at the drug-court location at the Family Service Mall (including alternate community service locations) in order to remain in compliance and on track in the program.

Some weeks, it could be more: showing up at family group session with a family member in tow to discuss family issues and needs related to drug abuse and the drug court program (once a month), and attending community-based recovery programs such as Alcoholics

Drug court is serious about meeting requirements. Miss a lick on any of those appearances and you face stern language from the judge and sanctions that are as certain as sunrise: extra group sessions (not just makeup, but add-on), additional community service hours (same deal), increased reporting to the case manager, more frequent drug tests – or jail time – in one-, two-, or multi-day increments, automatic for drug test failures. All of the above are not dealt out all at once, of course, but penalties are imposed on individual clients as the team deems necessary to make the point, based on each individual case, about staying in compliance. Drug court vs. prison time

That’s what is meant by “intensive.” It’s what makes some drug offenders consider serving prison time for several months rather than remaining at home in the community but with drug court “in their face” seemingly every hour of every day for a year or more. But it’s what makes drug court work, more effectively than any other process yet known, to help drug abusers actually recover from addiction, with a real hope of becoming a productive member of the community.

How well does it work? We’ll deal with that question in a separate article.

Here are some other topics that will be covered in future articles:

Who qualifies for drug court?

What does it take to graduate from drug court?

What are the various stages of drug court?

What is the profile of Blount County drug-court clients?

What happens when clients fail?

What do drug-court principals think about the process?

Drug court from the perspective of:

the legal side: prosecution and defense.