What happened to that $1 million? 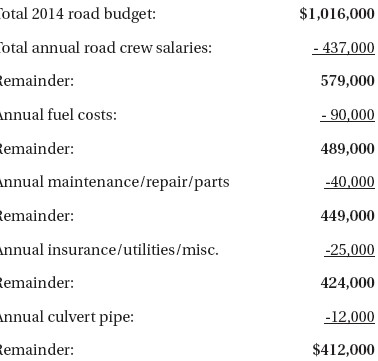 Blount County districts received, in round numbers, about $1 million apiece in their road budgets for 2014. (District 1 got a little more, Districts 2, 3, and 4 somewhat less.) So residents should expect to see about $4 million in road improvements countywide for the year, right? Wrong. A lot less than that actually goes to resurface roads.

The Blount Countian sat down with District 1 Commissioner Allen Armstrong to try to illuminate the seeming disconnect between the amount of the road budget and the amount of road resurfacing that results from it. There’s nothing shady about it. It’s simple arithmetic. The figures below are representative costs from the District 1 budget – actuals for the year so far plus estimates for the 4.5 months left to go in this fiscal year. Costs will fluctuate somewhat from year to year. Other districts show similar profiles.

The figure $412,000 represents the money available for paving, repaving, and repairs (potholing) for roads in District 1. Potholing will take about $75,000 of that amount this year, leaving $337,000 available for paving projects. So, figure about a third of that beginning million dollars translates to new surface on District 1 roads. A mile of tar and gravel costs about $32,000. A mile of asphalt costs about $85,000. Armstrong said he has paved a little more than 30 miles of roads in three years.