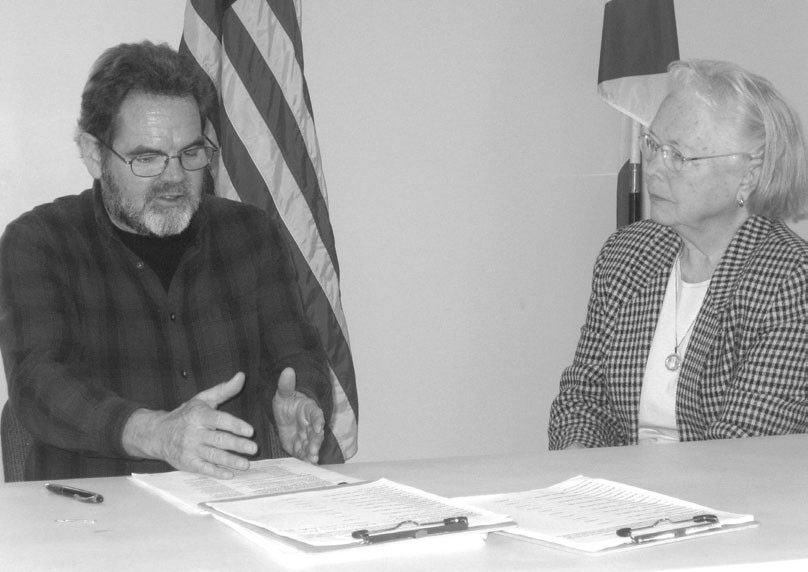 Roger Wooley, organizer of the Blount County Improvement Committee, discusses limited home rule with Mayor Thelma Smith of Hayden, whose town is involved in its own efforts to clean up junk, weeds, and litter.

At its meeting last Wednesday, the West Blount Development Association addressed litter and rubbish discarded on roadsides as well as junk, weeds, and dead animals among other nuisances there, even noise.

The discussion arose from a county visitor’s observation that the road along Skyline Drive en route to Rickwood Caverns State Park looked more like the route to the local landfill than like its designation on a road sign as a scenic drive.

The message having hit home, association members spent part of the morning discussing ways to clean up the roadside and keep it that way:

•asking county Commissioner David Cochran to bring a crew of inmates from the county jail to Skyline Drive as soon as possible to clean up the roadsides;

•requesting the Friends of Rickwood Caverns organization to take on the job of litter cleanup on Skyline Drive as an on-going assignment.

Guest speaker Roger Wooley, Locust Fork area, said he organized the Blount County Improvement Committee to obtain enough signatures on a petition to place the issue of limited home rule on the 2010 ballot.

Limited home rule would authorize county government to pass ordinances regulating such nuisances as those named above, along with sewage and pollution. Without passage of such an enabling bill, or specific action by the state Legislature, county government does not presently have the authority to pass ordinances regulating such nuisances.

Limited home rule would authorize county inspectors to write citations to property owners whose property is in violation of nuisance ordinances, requiring them to clean up the property, and imposing fines for failure to do so.

Wooley said limited home rule proposals have been placed on the ballot for citizen approval in 22 counties in the state. It has passed in 19 counties, including neighboring Marshall County just to the north.

Wooley said limited home rule has nothing to do with zoning and grants no authority to levy new taxes. He said impact on farming would be small, as farms and farming operations are regulated by other laws. Limited home rule would apply only to unincorporated areas of the county, unless an individual municipality authorized the county to act in its behalf.

Wooley noted that the county commission could put a limited home rule proposition on the ballot just by voting to do so. Another way of bringing it to a vote is to collect names on a petition to be presented to the county probate judge, requesting that the issue be placed on the ballot. Wooley said the requirement is to have sufficient valid names on the petition to equal 10 percent of the voters who voted in unincorporated areas of the county in the last election, a figure he estimates at about 2000 signatures.

Wooley said anyone who wants to help can do so by signing the petition and by circulating a petition and collecting signatures themselves. Only signatures from registered voters living in unincorporated areas of the county will be counted as valid for petition purposes, he said. Citizens from any area of the county can vote on the proposition when it appears on the ballot, he added.

Further information and copies of the petition form are available from the Blount County Improvement Committee, P.O. Box 102, Locust Fork, AL, 35097. Other background information may be found on the web site www.SelfGov.net.