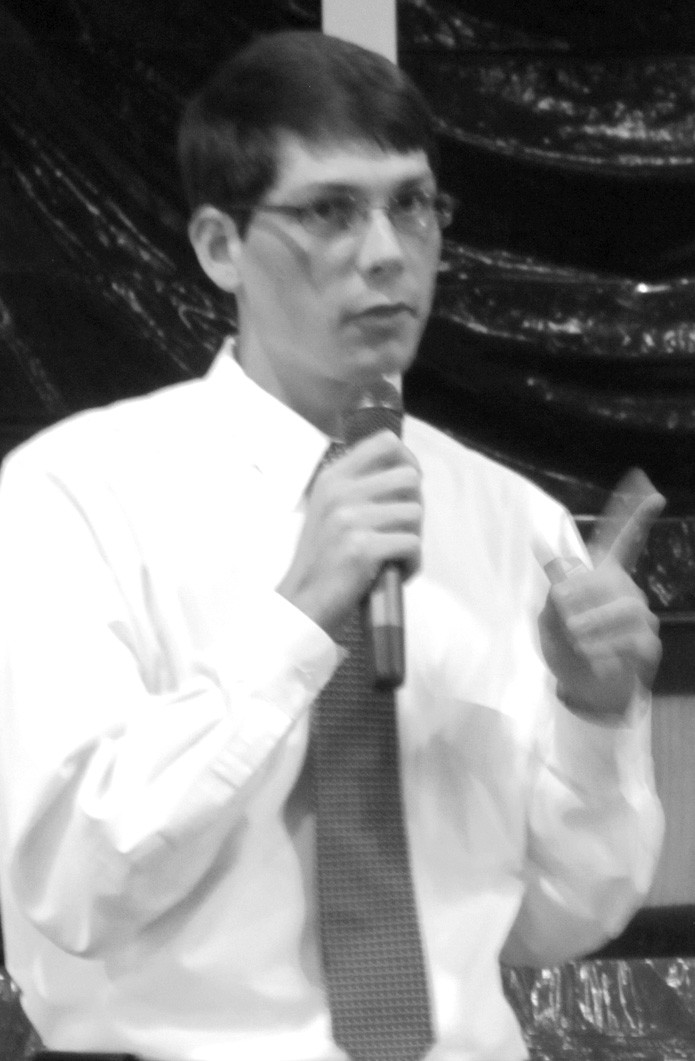 Joseph Burchfield of the Alabama Department of Commerce tells members of the West Blount Chamber of Commerce that the site selection process is so driven by instantaneous access to on-line databases, many sites are eliminated from consideration without the associated communities even being aware of the search.

The West Blount Chamber of Commerce held its second organizational meeting last week at Crossroads Baptist Church, electing nine members to the board of directors and approving proposed by-laws as its principal business for the evening.

Board members may serve one additional three-year term if elected, then must leave the board for a period to allow new board members to serve, after which they may return to serve additional terms if they wish.

The group also approved without amendment proposed by-laws which had been previously distributed to the membership for consideration.

Marlene Green, one of the four initial organizers, reported that membership totalled 80 as of Thursday, and that the group has $2,306.25 in its account.

“The goal of the initial drive was to get 60 members, so we’re off to a great start,”commented Greg Reid, another of the initial organizers, who conducted Thurday’s business meeting. Other members of the organizing group are Terry Lewis, who introduced the guest speaker, and Jim McCullar.

The next meeting of the West Blount Chamber of Commerce will be Thursday, Aug. 16, at 6:30 p.m. at Crossroads Baptist Church. The guest speaker will be Wiley Lott of Alabama Power Company. Reid announced that the first board meeting will be held before that meeting at a time to be determined later.

He identified those agencies, then enumerated a number of different considerations involved in industrial recruiting, including site selection factors, incentives and abatements, training availability, infrastructure readiness and preparation, and state target market priorities.

He also pointed out the importance in the current recruiting atmosphere of having as much information as possible about potential sites available and accessible on-line since “site selectors work by a process of elimination” and may eliminate many potential sites based on readily available on-line data, without a potential target community ever being aware that a search was underway.

Burchfield noted that the Economic Development Partnership of Alabama maintains a comprehensive searchable database of available qualified industrial sites and buildings by county. Currently, three Blount County industrial sites are listed there: one in Oneonta (Oneonta Industrial Park), one in Locust Fork (County Line Industrial Park), and one 200-acre site at West Blount Industrial Park. In addition, two building properties are shown as ready for occupancy: the former Superior Bank campus in Blountsville and the Allied Building in Oneonta.