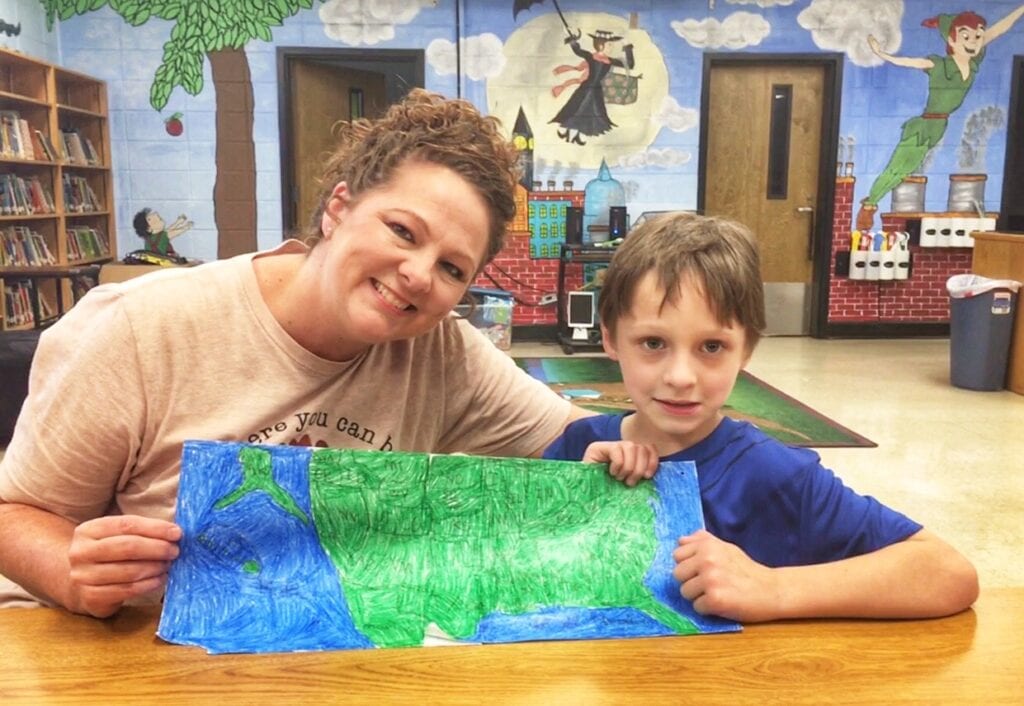 Angie Armstrong and her student Ryley Robertson show off his map of the United States.

Ryley Robertson said, “Well, I know all of them.” Armstrong pulled up a blank map of the United States, and sure enough, Robertson correctly named each state that she pointed to. In his most recent timed drill, he named them all in two minutes, 13 seconds.

During another lesson, the class was reading a story about a holiday celebrated in India. Armstrong asked if anyone knew where India was. Robertson’s hand went up as he correctly told her what continent India was on. She asked him, “How many countries do you know?” He replied, “Most of them.”

When asked how he knows locations and names, he shared about an app called Stack the Countries. He said Europe was the hardest to learn and South America was his favorite so far. He can even list the states of the United States from smallest to largest and in alphabetical order, as well as name the capitol of each one. He is currently learning Alabama’s 67 counties.

Robertson also likes to draw. He enjoys drawing Angry Bird characters, road signs, and most recently he drew a picture of the United States. In the drawing he outlined the states and listed each one’s abbreviation. His classmates get excited when Ryley learns another map and continue to cheer him on.

Throughout April, Armstrong, along with countless others around the world, celebrated the uniqueness of individuals like Robertson during Autism Awareness month. According to www.autismspeaks.org, autism, or autism spectrum disorder (ASD), refers to “a broad range of conditions characterized by challenges with social skills, repetitive behaviors, speech and nonverbal communication.”

The Centers for Disease Control reports that autism affects an estimated one in 54 children in the United States today. Boys are four times more likely to be diagnosed with autism than girls.

Autism Speaks, an advocacy and support organization for individuals with autism and their families, stated, “We know that there is not one autism, but many subtypes, most influenced by a combination of genetic and environmental factors. Because autism is a spectrum disorder, each person with autism has a distinct set of strengths and challenges. The ways in which people with autism learn, think, and problem-solve can range from highly skilled to severely challenged.”

According to Altogether Autism, autistic individuals display a range of strengths and abilities such as “learning to read at a very early age; memorizing and learning information quickly; thinking and learning in a visual way; may excel in academic areas such as science, engineering, and mathematics as they are technical and logical and do not heavily rely on social interaction; have an extraordinarily good memory; precise and detail orientated; very punctual; strong adherence to rules; and a capability for alternate problem solving.”

If you suspect your child may fall somewhere on the spectrum, contact his or her doctor for further evaluation.