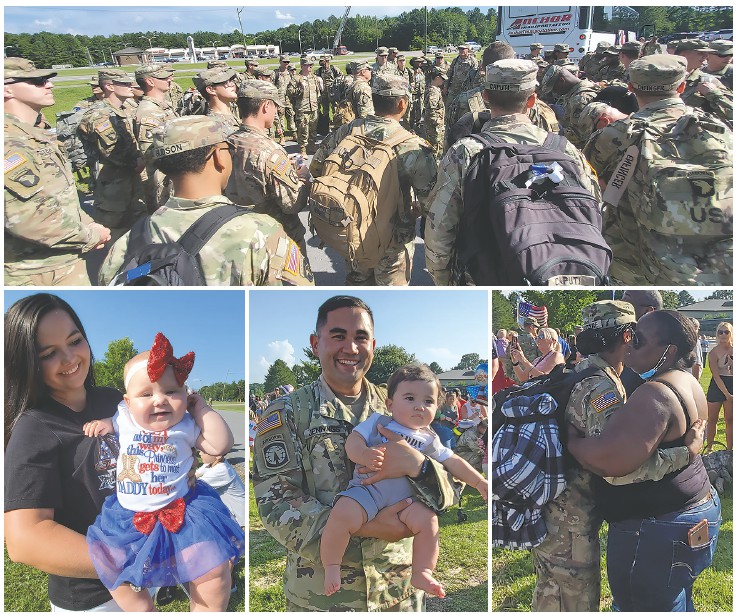 Top: Soldiers receive final instructions after exiting buses. Bottom left and center: Several soldiers got to hold children for the first time. Right: Getting their arms around family members was a joy to each soldier.

Amid cheers and tears, members of the 1166th Military Police Company arrived home late Thursday afternoon at Oneonta High School. The 163 members have returned from their October 2020 deployment to CENTCOM. According to 1st Sgt. Christopher Black, the unit was spread across six countries in 10 permanent locations from Saudi Arabia to Afghanistan.

The unit’s assignment was to carry out USA Custom Missions. Every item, whether it was a box, a bag, a vehicle, or equipment being returned to the U.S., had to be cleared and screened by unit personnel for any potential biological or chemical warfare. Black acknowledged the mission as successful, and, like others, was glad to be home and ready to enjoy several weeks of personal time.

When asked what he noted about the unit members who were on this mission, he said he noticed the pride of the service members. It was the first deployment for many of the group. They were in a new atmosphere, yet there was a fulfillment from within that they were accomplishing what was needed of them despite working in weather that varied from as low as 40 degrees to as high as 130 degrees.

Spc. Marquan Buchanan, who has been in the military for three years, said that people often have a misconception of what the military does. Most people immediately think of combat when the military is mentioned, but there are many different roles that each unit has assigned to them to make the puzzle complete.

While on assignment, Buchanan realized how much it tests a soldier’s honor, integrity, loyalty, duty, respect, personal courage, dignity, and selfless service. Although trained, there are so many factors that come into play while deployed. He said he has learned to appreciate life more and is concentrating on making every day count.

As we talked, Buchanan was waiting for his family to arrive. He said he could not wait to hug his five siblings and enjoy a home-cooked meal. He did not know what that first home-cooked meal would consist of, but he knew it was going to be delicious.

After family, what did Buchanan miss the most? He missed the grass, trees, and rain, as he was primarily located in Kuwait, which is nothing but sand. He also missed the freedom we experience in the U.S. and he was looking forward to being able to drive again.