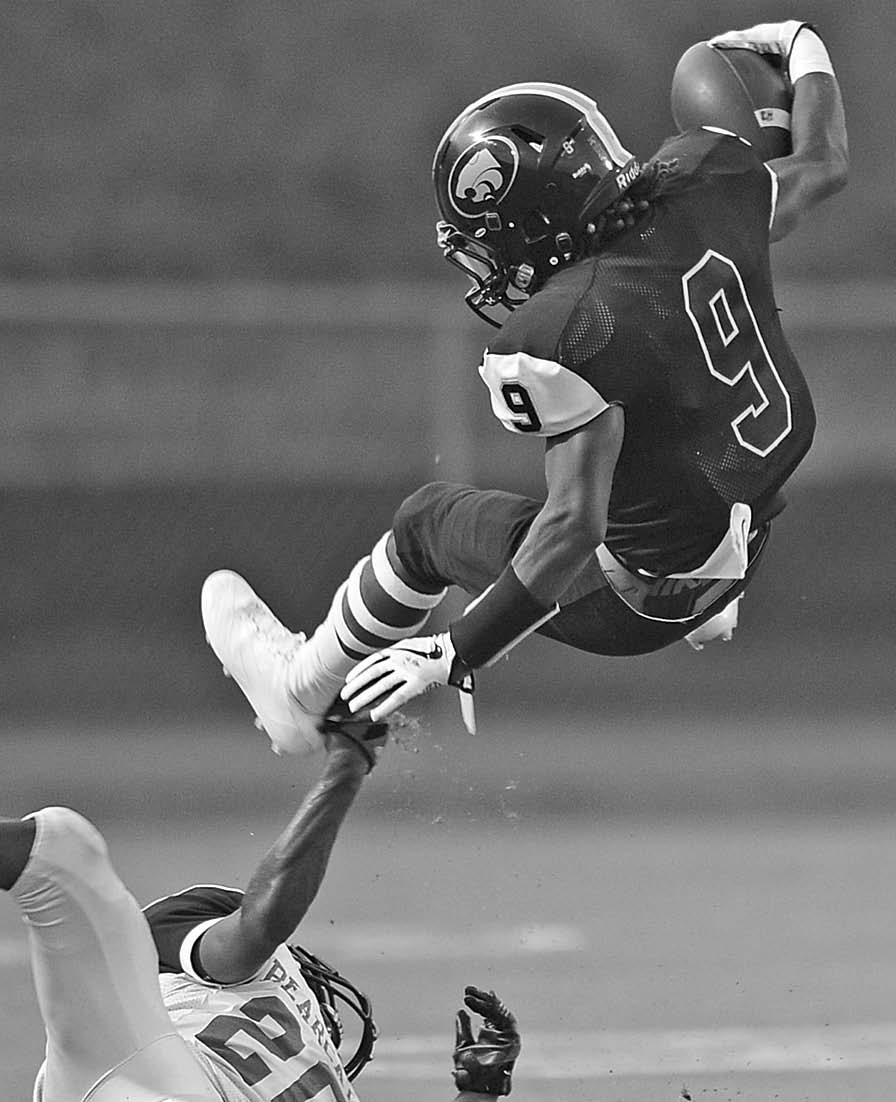 Hayden’s Jay Burrow is upended by a Weaver defender.

The Hayden Wildcats opened the 2017 season with a disappointing loss to the very talented Weaver Bearcats 32-24. After falling behind 21-0 and 29-12 at halftime, the Wildcats had a chance for the come-from-behind victory but came up short.

Weaver got on the board midway through the first quarter following a 34- yard punt return that gave the Bearcats a first down at the Hayden 11. On the next play, quarterback Dalton Hamby raced into the end zone for the score. Riley Benavides hit the point-after to put Weaver up 7-0 with 5:26 on the clock. The Bearcats scored again after Hayden failed on a fourth-down try. Shamar Spinks ran in from 20 yards. The point-after was good and Weaver led 14-0 at the end of the first quarter

The Wildcats fumbled on their next possession at midfield and Weaver scored a minute-and-a-half later to go up 21-0. Hamby hit London Knight for 23 yards and the score. Junior Jay Burrow, the Brett Chappell ALFA Insurance Player of the Game, returned the kickoff 56 yards to the Weaver 35. Hayden got on the board when Burrow caught a 4-yard pass from senior quarterback Sheridan Miller. The point-after failed, but the Wildcats had cut the lead to 21-6 with 7:47 left in the half.

A long kickoff by junior Cole Hawkins pinned Weaver at the 9, and junior Kade Marlin recovered a Bearcats fumble at the 10. Weaver was able to hold the Wildcats out of the end zone. Hayden forced a turnover on downs at the 17 after the Bearcats failed on fourth down. Senior running back Levi Snider scored his first of three touchdowns on a 1-yard run. The try for two failed but Hayden had cut the lead to 21-12 with 1:49 left in the first half.

Unfortunately, Weaver returned the kickoff to the Hayden 38, on the first play Knight ran 38 yards for the score. Hamby hit Knight for the two-point conversion to put Weaver up 29-12 at the half.

The second half was all Wildcats.

On Hayden’s first possession, Snider got his second score of the night on a 1- yard run. The try for two failed but the deficit was only eleven, at 29-18, with 7:23 remaining in the third quarter.

Early in the fourth quarter, Snider scored on a 4-yard run, his third touchdown of the night. Again the try for two failed but Hayden was only down 29-24 with 9:47 left in the game. The Wildcats had a couple of chances to win but a turnover and time ran out on the Wildcats. Benavides hit a 35-yard field goal late to put the Bearcats up 32-24 with 2:03 left in the game.

Wildcat head coach Keith Register said, “It was a tough loss but the boys never gave up. I’m proud of our effort especially the second half. We didn’t lose, we ran out of time.”

The leading rusher for Hayden was Snider, who had 74 yards on 14 carries and 3 touchdowns. Senior Austin Turner had 57 yards on 13 carries, Burrow had 40 yards on six carries, along with a 56- yard kickoff return. Senior Caleb Wilson added 24 yards on five carries. The leading receiver was Senior Cody Snow, who had two catches for 49 yards while Burrow had a 4-yard touchdown reception and senior Cam Nelson had one catch for 5 yards.