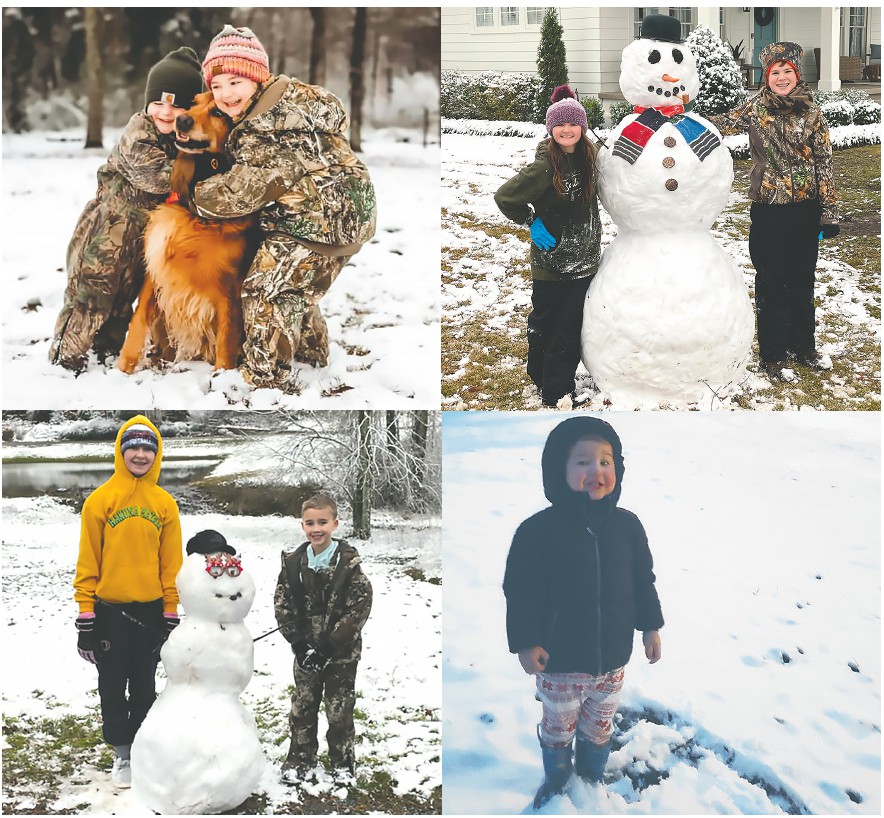 Clockwise from top left: Abbie Alexander of C+P Photography caught Coy and Chandler giving Samson a big snow hug. Jenna Shea and Ian Evans fashioned what they claim is the perfect snowman. Cheryl Helton and grandson Jameson Butts were outside at daybreak (in pajamas and dinosaur boots) playing in the snow. Brooke Wilson shows off the whimsical snowman built by children Kearstin and Easton.

It is common to hear Alabamians say, “If you don’t like the weather, just wait a couple of days.” And just two days into 2022, that quote could not have been any truer.

After experiencing record-breaking highs on New Year’s Day and blustery winds lasting into Jan. 2, to actually being placed under a tornado watch and dense fog advisory, then to rain, sleet, and snow on Jan. 2, Blount County experienced what was deemed as “weather whiplash” by a local television station.

With a high of 78.8 degrees at 1:35 p.m. Saturday afternoon, the temperatures began to fall slightly, but not enough for weather forecasters to be concerned. An approaching cold front could likely produce tornadoes or straight-line winds before sending temperatures plummeting into the upper 20s or low 30s, and producing snow in the wee hours of Monday morning. Forecasters pretty much nailed it and even though some Blount Countians awoke to only a dusting, others have reported several inches of accumulated snow. Although there were initial concerns of black ice and road closures, most of the roads remained open.

By late Monday afternoon, green grass could be seen emerging from under the melting snow. Despite the low-to-mid-30 temperatures, the ground was simply too warm for most of the snow to linger.

But, the few hours of Blount County’s winter wonderland produced a beautiful backdrop and provided some fun times for the young and young-at-heart. Whether it was strolling through the perfectly laid snow, building a snowman, or having a snow ball fight, January 2022 has not disappointed when it comes to weather. All four seasons played out within the first 50 or so hours of the new year.

What does the rest of this year hold for Blount County weather-wise? Who knows? One thing is for sure, “If you don’t like the weather right now, just wait a few hours, it likely will not disappoint.”