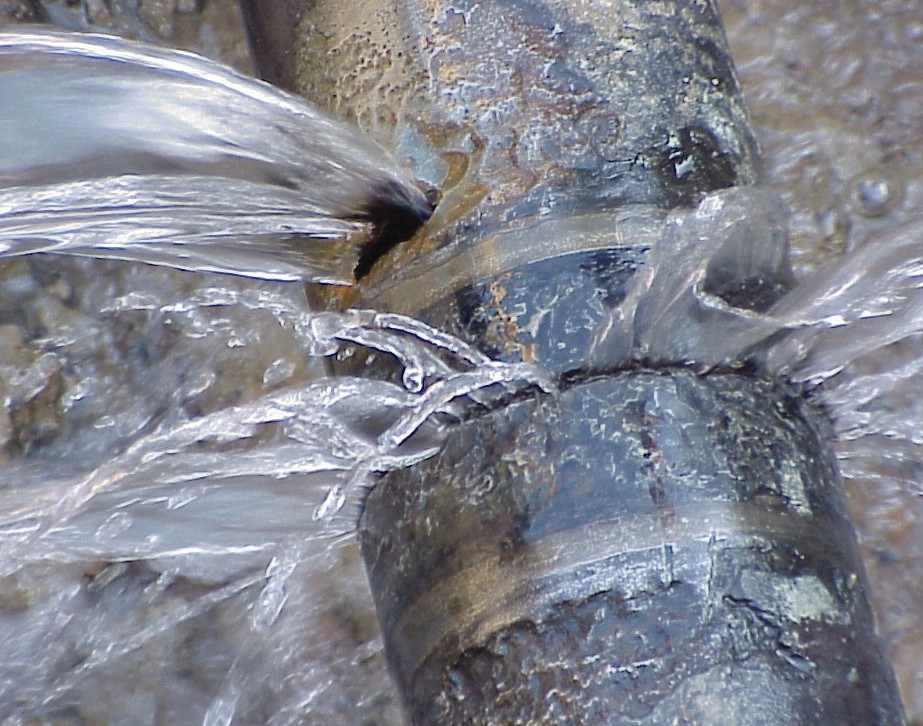 A pipe like this, leaking at a rate of five-gallons-perminute, can add up to 216,000 gallons of water loss in a month’s time, costing the customer over $1000 in usage charges. Water companies vary considerably in how they handle extrordinarily large usage amounts.

A controversy has been brewing for months now between a household served by the Snead Water Department – that of James and Shirley Brown – and the water system itself, operated by the Town of Snead. There are two aspects of the controversy: 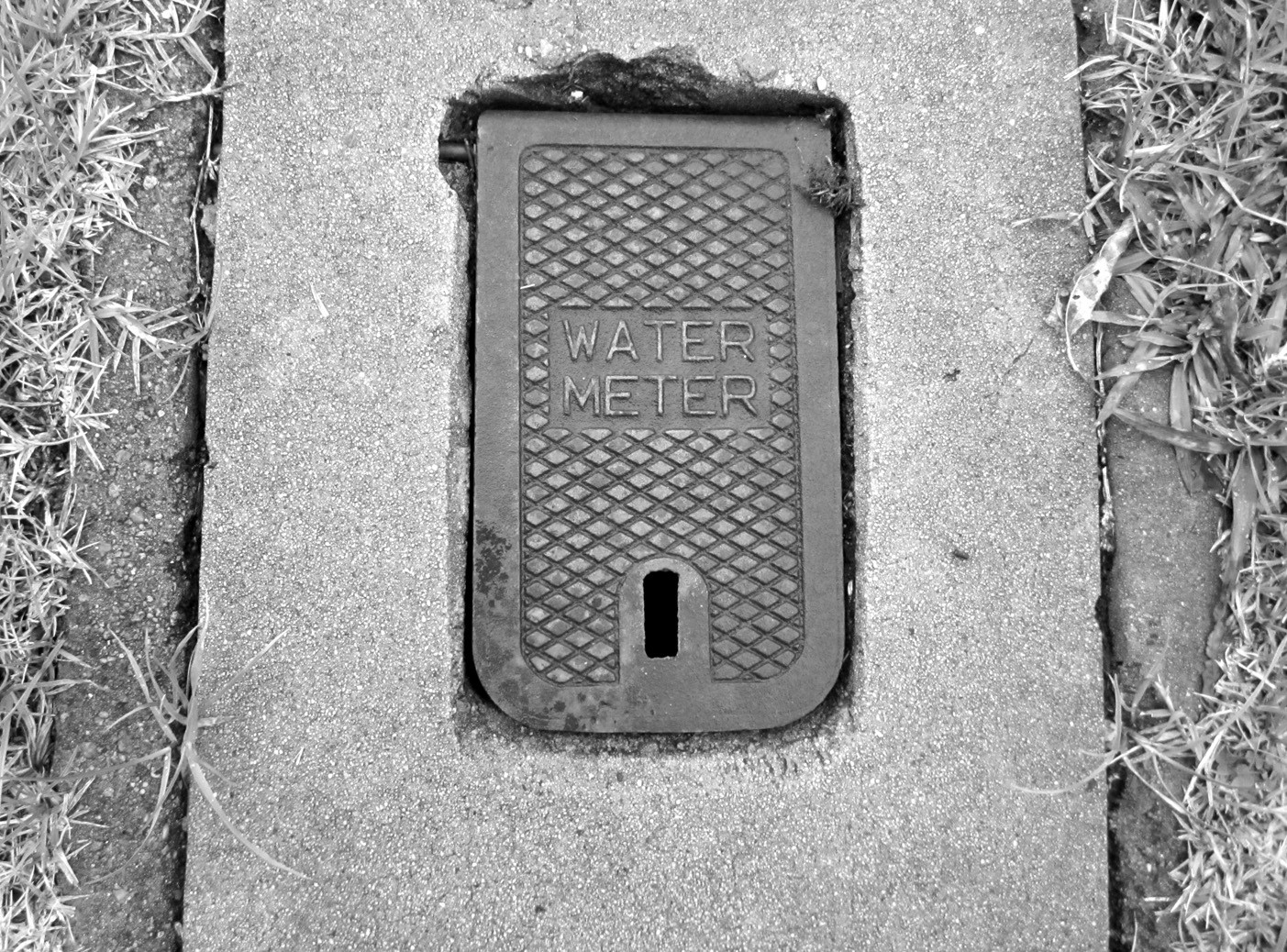 Water meters, according to local water managers, don’t malfunction and give elevated readings, though as they age they do slow down somewhat, they say, due to the buildup of rust and other deposits, causing them to under-report somewhat the amount of water used.

(1)The facts of the matter, and (2) equity considerations. After talking to parties involved – along with spokesmen from four surrounding water systems – The Blount Countian, with some trepidation, is going to venture into an attempt to report on the situation impartially.

As to the facts of the matter, we can’t judge them definitively, because we are not water system engineers, and besides that we may not yet be in possession of all of them.

On the matter of equity, nobody has appointed us as judge and jury to rule on the rights and wrongs of the matter.

But it does seem to us a matter that the public has a bona fide interest in and perhaps a right to an opinion as a “friend of the court.” It is in that belief that we present the following. It is a summary of what we understand to have happened, and where we believe things to stand presently, based on conversations with parties and news reports of public discussions. The problem begins

The problem began for the Browns when they were informed by a mailed notice from the Snead Water Department late last September that indications from their meter reading indicated a possible leak in their water line. That reading had been taken several days earlier before they received the notice, according to the Browns. Then, in early October, they received their monthly bill. The bill was for $1,441, $1,384 of which was for water usage. The Brown’s normal bill for a month’s usage was in the $40 range according to Mrs. Brown. The bill for the following month was $606.

A bill that high – over $1,800 for the two months – would correlate with water usage in the hundreds of thousands of gallons. From a layman’s standpoint, it seems a leak of that magnitude should have been easy to find. But water managers from several surrounding systems have said that’s not the rule. While a buried water line will sometimes create a telltale wet place or standing water in the event of a large leak, that’s not always the case. Sometimes due to rock formations below the surface, the water doesn’t come to the surface, but goes down through the rock formation without leaving any surface sign.

That’s apparently what happened at the Brown’s house since no leak in the line was ever found, although they hired a plumber to locate and repair the problem. The plumber did not find the leak by visual inspection, and recommended that, rather than digging up the entire line in an effort to find the leak, a new line be installed between the house and the water meter. That’s what was done, at a cost of about $500 to the Browns, who actually dug the trench for the line themselves.

The Browns asked the Snead town council to adjust the bill to relieve them of the economic hardship of paying nearly $2000. They were offered the option of paying the outstanding amount on an installment basis at a rate of 10 percent per month. However, they were to be charged the regular rate of $5.50 per thousand gallons for the full amount of water lost in the leak. Adjustment plan proposed, disposed

Councilman Jack Freeman proposed a plan to the town council whereby customers with extraordinarily high water bills would pay them at a reduced rate of $3.50 per thousand gallons, a little over half the full rate of $5.50 per thousand gallons they would normally be charged. Customers could avail themselves of such an adjustment once every three years, according to Freeman’s plan.

Utilities supervisor Jeff Whited spoke against the plan saying that the town’s loan guarantor, a New York bank, would not approve such a policy. It could result in increased water rates for everyone, he said.

The council did not debate the matter further, and Freeman’s motion to implement the adjustment plan died from want of a second.

In early December, the Browns paid the entire bill in full. But in a letter to the Snead council, read in the Dec. 12 minutes, they asked the town for a refund of $528 for some 96,000 gallons of water used between the time their meter was read and the leak discovered, and the time they were notified by the water company of the leak some five days later. Two salient questions and what others do

In a subsequent letter to The Blount Countian, the Browns stated the question this way: “In all honesty, should we be held responsible for 96,000 gallons that leaked for five days with only the water department knowing?” the letter asked.

It was followed by another arresting question: “How many feel an emergency relief adjustment program is needed for excessive/ uncontrollable leaks for Snead water customers?”

Well, what policy do other surrounding companies pursue in a case like this? We wondered. So we asked several other local water companies.

Oneonta Utilities’ policy is to compute the average bill over a period of time then charge the customer for the average usage, plus one half of the usage indicated on the “leak” or extraordinary usage bill, according to Rodney McCain, general manager of Oneonta Utilities. The customer can only avail themselves of this policy one time a year, he said.

Blount County Water Authority’s policy is that a customer can choose to have a bill adjusted any time usage exceeds three times or more of the average bill. The customer pays the average bill and the excess or “leak” usage is billed at cost, which is roughly half the regular rate, according to general manger Jeff Carter. The customer can avail himself of this policy only once over the life of the account.

Blountsville Utility’s policy is to require the customer to pay the average bill, plus an adjusted amount for excess usage which is currently billed at 65 cents per 1000 gallons, compared to a normal rate of $5.25 per thousand gallons. A customer can request such an adjustment once every two years. The discounted rate of 65 cents is below actual cost, according to manager David McAlpin, and is due to be adjusted upward toward actual cost soon.

Cleveland Water Works, like Snead, does not adjust for leaks or extraordinarily high usage, according to water works manager Steve Pass. He cited restrictions by debt holders on reducing charges for usage shown by the water meter. “We are required to bill for the full number of gallons that go through that meter,” he said. Other pertinent matters

Whited said that water utilities that are fully owned have more flexibility in their adjustment policies than departments that have outstanding debt.

Water utility managers seem to agree on one characteristic of water meters: they don’t malfunction to show unexpectedly large readings. They usually slow down over the course of years of service, typically somewhat under reporting the amount of water flowing through them as rust and other chemical deposits accumulate on their workings over time. Neither manager would say a meter could not possibly malfunction to give an extraordinarily high reading, but both said they’d never seen such a case in their years of experience.

In their letter to The Blount Countian, the Browns also questioned the propriety of the water company “making a huge profit on major water leaks.”

The charge You have now heard the essentials of the case as far as we are aware of them. Attention, court of public