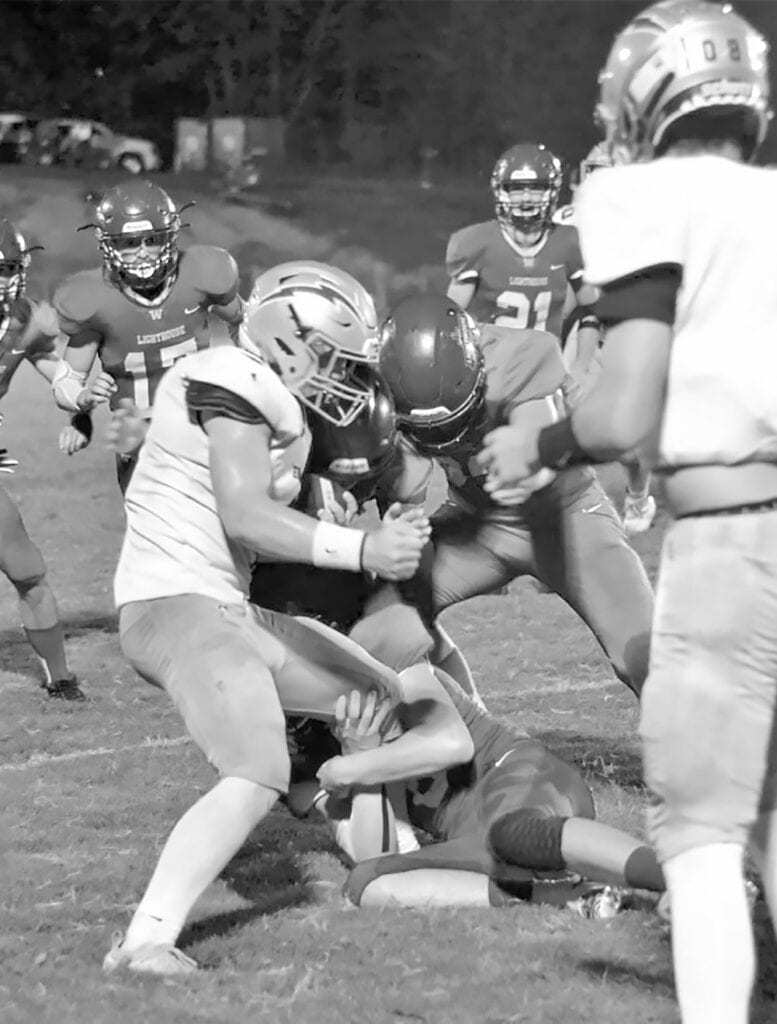 The Lighthouse Warriors’ defense takes down an Evangel Christian running back. -Lauri Knowles

The Lighthouse Warriors lost 49-34 to Evangel Christian Lightning Friday night. Evangel is ranked No. 1 in the 8-Man Alabama Christian League. The 34 points recorded by the Warrior offense are the most points scored against the Lightning this season.

The Warriors came out strong in the first quarter, scoring a touchdown on their first offensive drive while their defense held the Lightning back for two drives. Forced to step it up on defense, the Lightning succeeded in stifling the Warriors’ passing and running game for a time.

While starting Warrior quarterback Preston Graham was out temporarily due to injury, second team freshman Eliott Knowles led the offense downfield, finally shoving his way through the Lightning defensive line from the 1-yard line to score another touchdown for the Warriors making it 14-21 at the end of the first half.

Despite costly Warrior injuries and Evangel scoring three more touchdowns in the third, the Warriors fought back. They scored 20 points in the fourth quarter including a 75-yard touchdown pass from Graham to Isaac Aycock.

“Even though we lost, we learned a lot from it,” said Warrior freshman outside linebacker Jonathan “the Beast” Beason. “We played the most physical that we ever have. The little things are what can change the ballgame.

“Learn from your mistakes, for mistakes have the power to turn you into something better than you were before. Perfection is not attainable, but if we chase perfection, we can catch excellence.”

The Warriors are looking forward to playing the North River Chargers in their homecoming game Friday night at the Pinson Youth Sports Complex. Senior recognition begins at 6:30 p.m. with kickoff set for 7 p.m.