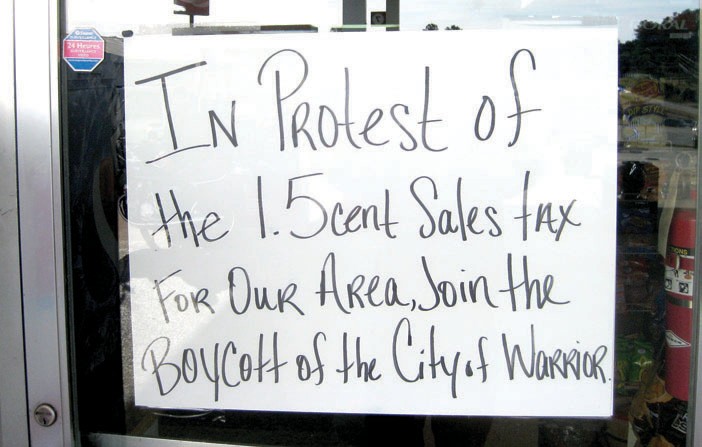 Sign appearing Tuesday on front door of Logan’s General Store at I-65 interchange and Ala 160. Sign was put up following Warrior council meeting where it was revealed that the Jefferson County town had passed an ordinance–unknown to any of those affected– levying taxes on businesses in Blount County. photo: courtesy Welton Carter

The City of Warrior on Dec. 7 passed a local ordinance to begin collecting sales taxes and business license fees at one half the town rate from Blount County businesses within its police jurisdiction.


Following a Warrior Town Council meeting Monday night that Blount County officials and business owners attended to protest the action, Probate Judge David Standridge said the county is considering filing suit in Blount County Circuit Court to overturn the ordinance if the city council allows it to stand. The county commission would have to vote in favor of the filing in order for it to go forward, Standridge said.

“The Town of Warrior, Alabama, located solely in Jefferson County, Alabama, has unanimously voted by way of city ordinance #2009-04 to begin taxing Blount County citizens and businesses. The logic behind this illegal and unconstitutional taxation across county lines is the town council’s claim that Warrior’s “police jurisdiction” extends into west Blount County.

“Mayor Rena Hudson made it clear…that ordinance #2009-04 is a ‘revenue ordinance’ to ‘collect revenue’ from west Blount County businesses and citizens.

“As district attorney, it is my sworn dury to protect our citizens and businesses. As such and on their behalf I will not tolerate this unconscionable tax grab. I am hereby serving notice upon the Town of Warrior, Mayor Hudson, and the town council that I have mobilized my staff to prepare and commence litigation to stop this scheme of ‘taxation without representation.’”

While the affected area has not yet been defined precisely, it is described as lying in a zone 1.5 miles beyond the corporate limits of Warrior. If the city limits of Warrior extend to or near the Blount County line as is presently thought, the police jurisdiction would include the Ala 160 corridor for a distance of some two miles east of I-65 – along with that part of the county lying between Ala 160 and the Blount/Jefferson county line. It would also take in an area west of I-65, including the West Blount Industrial Park.

The sales tax applicable to Warrior is 3 percent, according to city clerk Demetra Mixon. Half of that amount would be 1.5 percent collected from businesses in the affected area. Business license fees could run anywhere from $100 up, depending on the size of the business, she said.

Attorney Joe Wilson, filling in at the council meeting for city attorney Jim Ward, said that Warrior’s police jurisdiction already includes the area lying 1.5 miles beyond the city limits. That would place the jurisdication within Blount County. By state law, the police jurisdiction for towns the size of Warrior extends one mile and a half beyond its corporate limits.

However, Blount County residents in the area say they are not aware of receiving police services from the Warrior police department. Signs denoting police jurisdiction are not posted in Blount County or on old U.S. 31 leading into Warrior from Blount County.

Mayor Rena Hudson did not return the newspaper’s calls for further details concerning the ordinance.

About 20 Blount County residents including Standridge, Rountree, county attorney Tom Prickett, state Rep. Elwyn Thomas, and a number of business owners from the west Blount area attended the Warrior meeting Monday night to protest the action. Most thought they were appearing to speak against an action yet to be taken by the city council. According to Hudson, however, the ordinance was passed at the council’s previous meeting on Dec. 7.

In his presentation to the city council “pre-meeting” or work session, Standridge pointed out that an act was passed in the previous session of the Legislature (Constitutional amendment #806) stating that any municipality not located within Blount County may not annex territory within the county without a majority vote of Blount County’s citizens. The action of the Warrior council amounts to such an annexation, he said.

“Our residents are adamently opposed to this,” Standridge said. “I would ask the council to take a hard look at whether the gain you anticipate is going to be worth the effort of achieving it.”

“We’ve already done it,” Hudson said moments later, adding that the ordinance was passed in the last council meeting.

Later, Standridge summarized his position before the council’s regular business meeting. “We’re opposed to this action,” he said. “We’d like that on the record. We’re going to have an argument on this as to the law. Even if it’s legal, we question whether it’s the right thing to do. If you’re going to do it, why don’t you go through the process of allowing citizens to vote on it, as a matter of fairness?” Standridge received a round of applause from the mainly Blount County audience.

Hudson repeated that the ordinance had already been passed, adding, “I don’t think that’s something we would go back and un-do.”