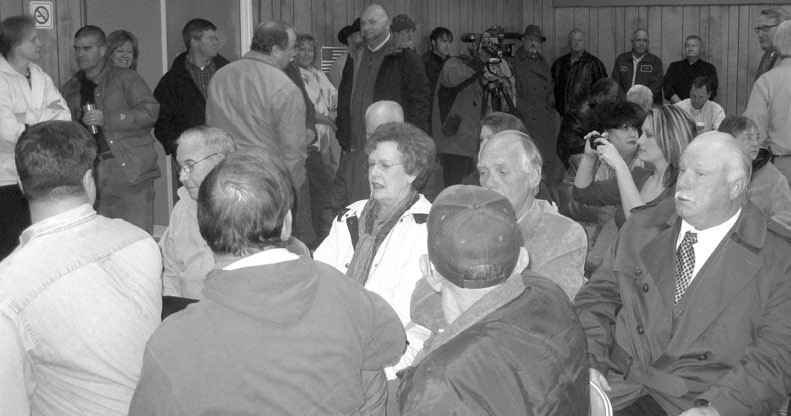 About 70 people, most of them Blount Countians, assembled at the Warrior Town Hall Monday night for the anticipated vote to uphold or rescind an unpopular ordinance. Ordinance 2009-04 imposes a 1.5 percent sales tax on Blount County businesses lying inside Warrior’s police jurisdiction. The vote to rescind failed, then was set aside, as the council decided to revisit the matter at its next meeting on Jan. 18.

The above headline is accurate, but misleading. The Warrior town council did defer a final decision on whether to rescind an ordinance imposing a 1.5 percent sales tax within its police jurisdiction – which includes an area of west Blount County – until its next meeting on Jan. 18.


However, they first voted not to rescind the ordinance originally passed on Dec. 7, then decided to defer final action on the matter until their next town meeting. In order to do that, they voted to rescind the 3-2 (with one abstention) vote just taken upholding the ordinance, then voted on a motion to postpone a final decision until Jan. 18.

The complicated parliamentary path apparently reflected conflicting emotions generated by impassioned statements, one by Warrior Tire owner Jeff Mann and one by Blount County Probate Judge David Standridge, pleading that the ordinance be rescinded. That was followed by an unusual and ultimately successful request by Standridge – supported by several Blount County citizens – after the vote to uphold the ordinance, that the council reconsider it in the interests of maintaining amicable relationships between the Warrior and West Blount communities.

Surprisingly, the council did just that, approving unanimously a motion to rescind the first vote and to “revisit” the matter at its next meeting.

At issue were trading relationships of long standing between the two communities that were being threatened by a boycott of Warrior businesses by Blount Countians over the intensely unpopular move by the town to impose local sales taxes across the county line.

Councilman Brad Fuller, who moved to rescind the ordinance, pointed out in remarks leading to his motion that the ordinance cannot be legally amended simply to exclude Blount County, as had been requested.

“Everything we have done is legal,” he said. “But it can’t be amended or modified. It’s all or none,” he said, indicating that the ordinance must apply to the entire police jurisdiction or none at all.

“I don’t think things will get any better with this situation unless we change,” Fuller added. “I’ll put that thought into my motion to rescind the entire bill,” he said, touching off the series of motions and votes leading to postponement until the next council meeting.

Throughout the meeting, Mayor Rena Hudson maintained order diligently, requiring each citizen to identify themselves for the record and allowing a full hearing to those who wanted to speak, including the exceptional appeal following the vote.

The Monday night meeting drew a standing-room-only crowd of about 70 people, more than half of them Blount Countians.

“This doesn’t change a thing,” said Blount County District Attorney Tommy Rountree as the Blount County group gathered briefly afterwards on the steps outside the town hall. “My staff and I will continue working on our lawsuit to overturn this thing,” he said.