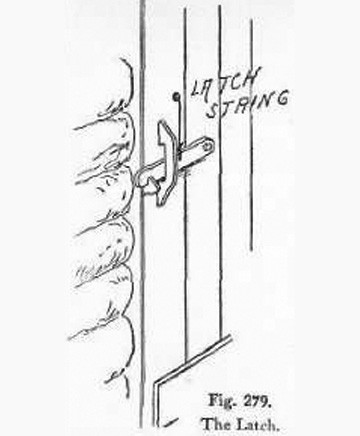 A reporter had been given an assignment that required him to interview rural Alabamians in their homes. In the course of his travel through the hills and backwoods, he discovered a people of tough hide, gentle heart, and genuine American ingenuity, people who expected payment of every penny owed to them, but would give you the clothes off their backs.


He stopped one day at the very old and rustic home of a woman who would have been Norman Rockwell’s perfect example of a grandmother. She stood with rake in hand as if on sentry duty against the falling leaves. Her lace-trimmed apron enhanced the simple beauty of the crisp, print dress she wore. Wire-rimmed glasses, silver hair pulled back into a ball, and an ever-present smile defined who she was. 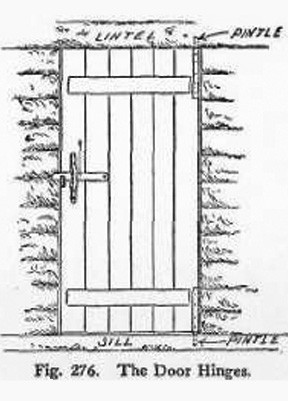 The above drawings of latchrope doors show their unique construction.

Before the reporter finished introducing himself, the lady interrupted with, “Well, come on inside out of the heat and we’ll have some sweet tea.”


As the couple approached the house, the reporter noticed the door had no doorknob, but rather a short rope hanging through a hole in the door. When she pulled the rope, the door opened. Noticing the reporter’s puzzled look, she explained that it was a “latchrope” attached to the latch inside.

The mechanism consisted of a wood slat secured to the door on one end. By pulling on the rope outside, she could lift the slat from the latch and the door would open. At night, she would pull the rope inside so that she and her husband Lewis would be safe.

She smiled as she related that Lewis would sometimes go into the nearby small town and stop by a neighborhood bar to play darts with his friends. “I would leave the latchrope out for him until midnight, and then I would bring it inside,” she explained. “After midnight he would have to wake me and face my wrath for staying out too late.

“My Lewis died last year,” she said, “so now I leave the rope out all night. I know he’s not coming back, but I just can’t bear to pull the rope in.”

She continued, “To me, it is more than just a latch and a rope through a hole; it is a reminder that someday I will go to my permanent home where Lewis is, and I know God will leave the latchrope out for me.”