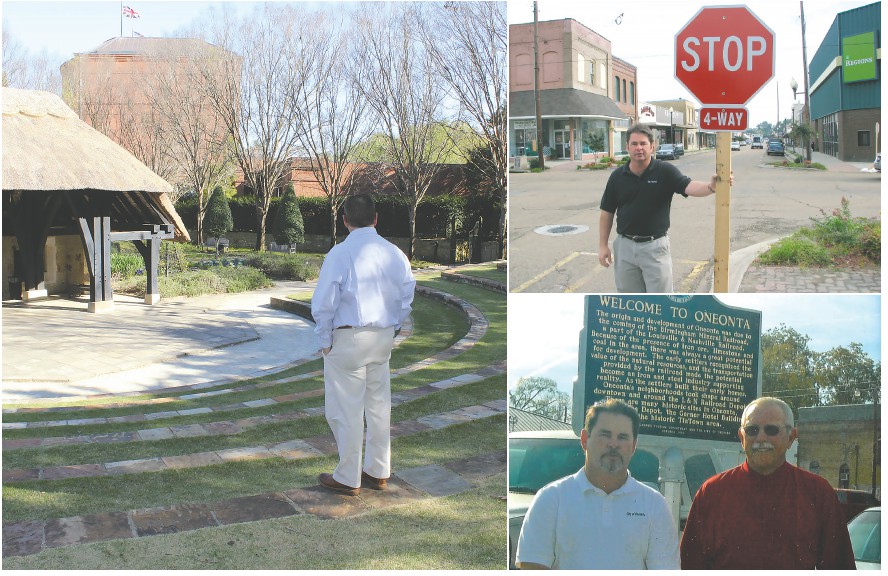 Retiring city manager Ed Lowe (left) surveys another city’s amphitheatre while, no doubt, dreaming of what Oneonta’s can be. Lowe (top right) with new stop signs downtown and (bottom right) with former mayor Daryl Ray as a new historical sign is dedicated.

When Ed Lowe joined the City of Oneonta in 1997, city officials were gearing up for the June opening of the city’s new aquatics center and transforming the former Worship Center building into the city’s new public library. While Oneonta was seeing a surge in population, the city’s historic downtown was becoming more sparse with empty storefronts dotting the landscape.

The mayor and council recognized that growth and change were inevitable and began the process of ensuring the city was poised to prosper, not just in 1997, but well into the future. Those first steps were probably not noticed by many at the time, but they began to restructure key positions in city hall.

Upon the retirement announcement of longtime public works director Marvin Sloan, Mayor Danny Hicks knew the city needed to find the right person to oversee not just public works, but also the inspection and street departments and be capable of handling the newly established position of airport director.

With years of experience in everything from aviation and mechanics to construction and development, Lowe was the right person. He came on board May 1, 1997. Ten years later, on Oct. 23, 2007, Hicks and the council created a new position, city manager. Lowe was immediately named the city’s first.

“What’s crazy and what a lot of people forget is that I had a career before I got in this office,” Lowe said. “I grew up here. I graduated from Oneonta. But then I left. I’ve lived and worked in Atlanta,

Memphis, and Minnesota. But, I’ve never regretted coming back home.

“All of those experiences contributed to the perspective that I brought with me when I was hired. I had been exposed to other communities and other cultures. I’d seen what worked and what didn’t. It made me more well rounded.”

Over the course of nearly a quarter of a century, Lowe poured his heart into the city he loves. He’s worked through seven municipal terms and worked under five different mayors with Mayor Richard Phillips being the final one.

On Dec. 30, Lowe stood on the balcony of the 110 Building peering over Main Street. What was slowly dying in 1997 is full of life, energy, and promise now. Lowe’s vision, commitment, dedication, and countless hours over the span of the last 23-plus years helped revive downtown. And as he walked out the door and into retirement that Wednesday afternoon, Lowe leaves the city poised for success in the years to come.

“Without a doubt, the revitalization of downtown is one of the things I’m most proud of,” he said. “There are communities all over the country trying to create what we’ve always had. To see it flourish again is special.

“When Oneonta was established, the city was laid out in the style of a village with downtown at the center and it’s all about walkability. The post office, the school, the grocery store, they were all walkable.”

During the 1970s, those walkable places began to spread out as more and more services were popping up along the city’s two major highways.

“That was so detrimental to the viability of our downtown,” he continued. “The heartbeat needs to be our downtown. We need to recreate our village. And we are not far from it. We’ve got the infrastructure to support it. The city just needs to keep making decisions that will further that vision, and I think they will.”

Lowe spent the better part of his last years with the city working towards that goal. He’s laid the foundation for further development downtown as well as new development with the city’s parks.

In his last council meeting as city manager, the council committed to development of a downtown amphitheater, a downtown open air market, a walking/biking trail, an upgrade of Woodland Park, a redesign of the recreation park, a new aquatics center, and a dedicated soccer field.

The impact of these will be felt for generations to come as will the other projects that have been accomplished under Lowe’s leadership (the partnership between the city and Wallace State with it’s downtown academic facility, bringing the senior center downtown, the airport at Robbins Field, and so much more).

“One of the things that I am most proud of is the senior center and the city’s commitment to its seniors,” Lowe said. “I am proud of the way we treat our seniors. I think that a community that neglects its seniors, its older population, is destined to have problems. I’m also proud of the commitment this city has made to education. Our school system, along with the postsecondary opportunities available with Wallace, makes us a more marketable community.”

“Maybe I was the catalyst, but it’s really the commitment of the mayor and the council and the … community that has helped bring about change. I thrive off change. It means you are evolving and growing.”

While change is inevitable, Lowe has found it disheartening over the last few years that “we don’t embrace our culture as much as we should.”

He continued, “I am not ashamed of who we are, where we came from. We need to be celebrating who we are and how we got here. We have a quality of life here that is second to none. We have an abundance of natural resources that we need to embrace and take advantage of.”

With Lowe’s long list of accolades, he said what makes him the most proud is the team of people he’s assembled who will lead Oneonta into the future.

“The people we have in place know what they are doing and they love what they do,” he said. “They care about this community. They are selfless. They will rise up and meet any challenge they face and this city is in great shape. The most worthy investment we have as a city is our employees and we’ve got a great group.

“Throughout the years, I was fortunate enough that each mayor I worked for supported personal growth and continued education. And Danny [Hicks] helped me develop a management style based on strength-based leadership. I want talented people, but I want people who are willing to learn and grown and evolve. I believe you hire the person and then you take their natural aptitude and strengthen that. You give them tools, resources, knowledge, and empower them.”

Lowe more than likely won’t sit idle for too long as he’s not a “good sitter.” He plans to spend some time with wife Karen at their beach house. He still has his contractor’s license and has a couple of projects about to get underway down there. He also plans to utilize his consulting business to “share a little of my knowledge and what I’ve learned over the years” with small communities throughout the Southeast.

“It’s my time to move on,” he said. “My exit changes the paradigm of where the city goes next. But the right people are in the right positions and I know this administration and staff will accomplish great things.”