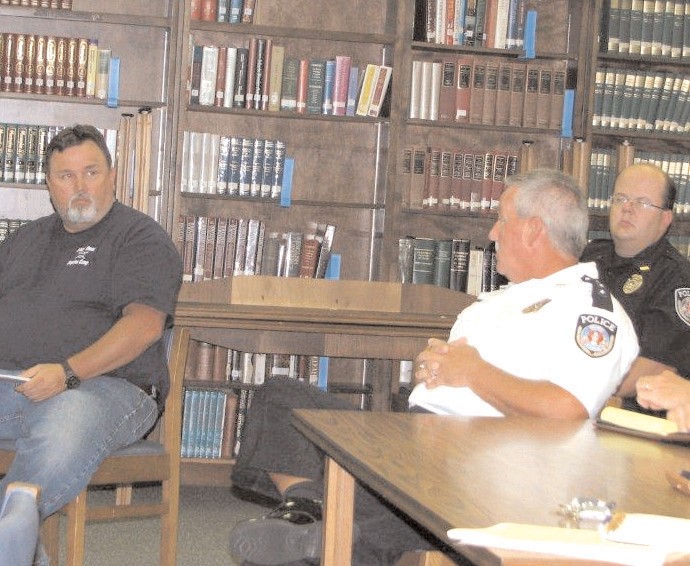 “The purpose of Virtual Alabama is for all schools in our state to have a common operating picture for disaster planning, response, and recovery,” Moody Duff of Auburn University-Montgomery’s Center for Government said to a select group last week in the Oneonta High School media center.


Assembled were school and city officials along with representatives from the police and fire departments. In addition, Oneonta Mayor Darryl Ray and city manager Ed Lowe were joined at the briefing by Blount County-Oneonta Agribusiness Center director Keith Hamby.

Duff’s address wrapped up a threeday visit to the school that is part of Virtual Alabama, a program set up by Gov. Bob Riley.

Virtual Alabama calls for one school in each system of the state to be mapped. The Oneonta system, with both schools under one roof, obviously has an advantage over other systems.

The schools are mapped using overhead photography that is usually supplied by county revenue departments and looks like a somewhat more detailed version of Google Earth. The photographic images are then meshed with floor plans of the schools to create 3-D maps of the facilities.

The resulting map is then overlayed with a variety of different markers or items of interest – Duff listed 37 on Oneonta’s map. Common markers include placement of fire extinguishers, evacuation routes, and staging areas (where students and faculty would go in the event of a bomb threat or fire alarm).

However, the 3-D image would also indicate other markers, such as where video cameras are placed and where power can be shut off to the school. In addition, the floor plan includes information about where school administrative offices are and where school nurses’ stations can be located.

“This is a tool to be used by emergency personnel to provide situational awareness,” said Duff. “Imagine you are that first responder to the scene of a disaster. How valuable would it be to have a complete layout of the school at your fingertips?”

The Virtual Alabama program also has the ability to allow law enforcement or rescue personnel to access a school’s security cameras.

“What if there was an incident inside a school and law enforcement didn’t really know what they were dealing with?” asked Duff. “Police could log on to the secure website and, in seconds, be looking into the school and into the particular area of the school where there is a problem. I think we would all agree that this would be an incredibly valuable resource to have.”

Oneonta was apparently ahead of the game here as Oneonta police chief James Chapman acknowledged that his department already had that capability.

Virtual Alabama is almost finished mapping one school in each of the state’s 133 school districts. The plan to map one in each system allows district personnel to then map the rest of the schools in the district using the mapped school as a template.

“It was just not feasible for us to map every school in the state,” said Duff. “We would be mapping more than 1500 schools. There is no way we could do that; we just don’t have the personnel for that.

“This does allow each system to see how it is done and then they can proceed with their own mapping. We, of course, are available to provide support and help to those systems as they work to map the rest of the campuses.”