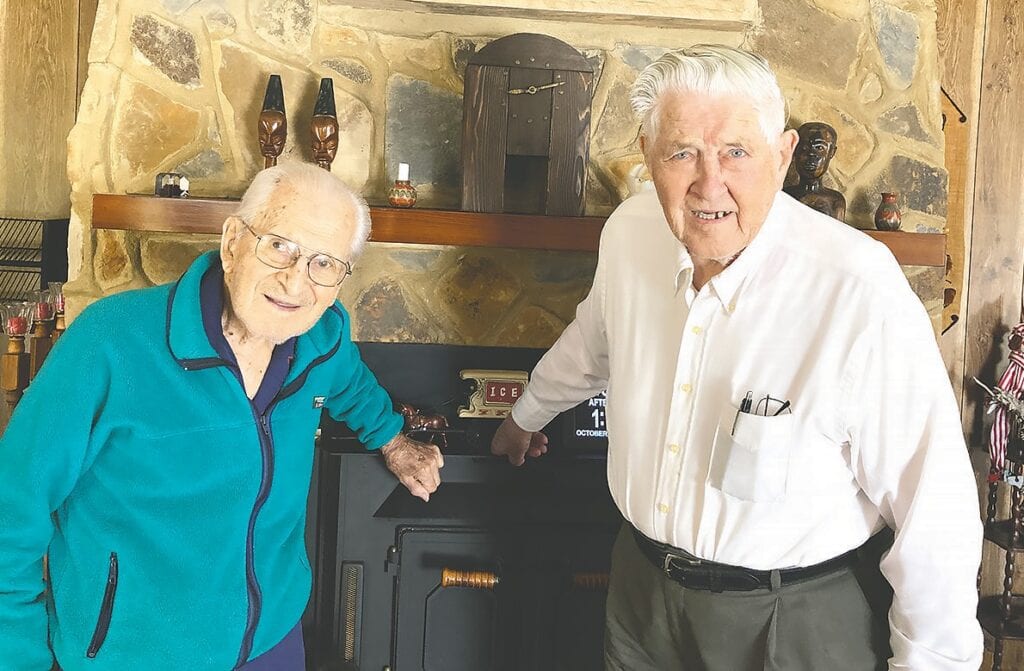 In the history of the world no greater human carry and care story has ever been told than that of the two Queens. It has been said that “a ship is like a world standing all alone on it’s own. It will provide the protection needed for its crew and passengers as long as they remain in the ship and everyone acts responsibly to secure the vessel at all times for safe passage of all aboard” (author unknown)

On May 27, 1936, the Queen Mary departed from Southhampton, England, embarking on her maiden voyage. She boasted five dining areas and lounges, two cocktail bars and swimming pools, a grand ballroom, a squash court, and even a small hospital. She would safely carry 2.2 million passengers in pre-war peace time and 810,000 military personnel in the second world war. For three years the Queen Mary was the grandest ocean liner in the world. During this time she even set a new speed record of 30 knots, which she held for 14 years.

The Queen Elizabeth was slightly larger than the Queen Mary. Peace time capacity was a crew of 1,000 plus stores for passage of 2,283 passengers. At the start of World War II, it was decided that the Queen Elizabeth was vital to the war effort. Following an elaborate ruse to throw off the Germans, the ship was secretly sailed to New York. The ruse worked; the same day the ship was supposed to arrive at Southhampton, the city was bombed by the Luftwaffe. It took six days of zigzagging (to elude German u-boats) across the Atlantic to reach the United States. 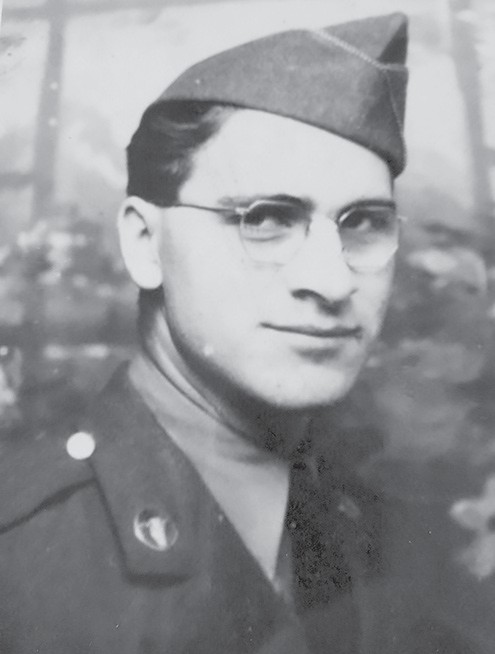 When the two ships docked beside each other in New York in September 1939, it would be the last time the Queen Elizabeth would carry civilian passengers for many years. After 1942, both of the Queens were relocated to the North Atlantic and used for heavy transports of American troops to Europe during WWII. 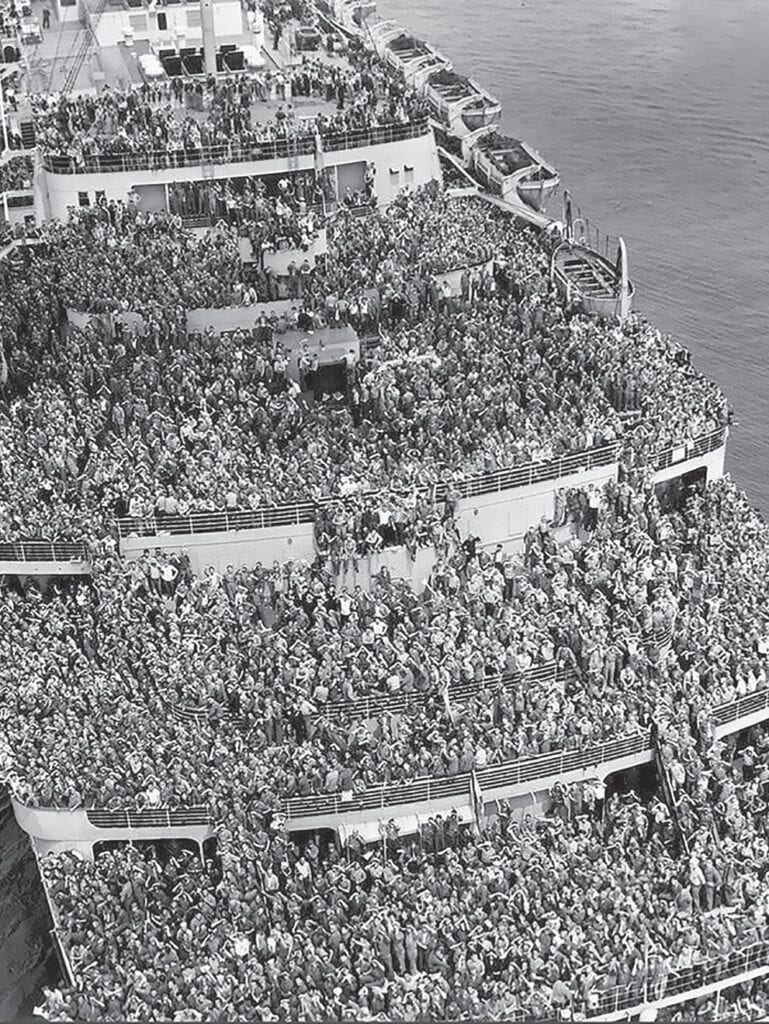 Troops return to New York on the Queen Elizabeth after World War II is over. -reddit.com

Santini was a medic (actually a registered nurse) assigned to the 156th Field Hospital Unit and made passage on the Queen Mary to Warrington, England, where he served for more than two years. About five years ago, after attending the funeral of Swanson’s wife, I had the opportunity to briefly discuss their time of service on both of the Queens when they were providing troop support.

One of the first questions I asked them was how many men were carried over each time a trip was made. Santini’s response was, “Which trip?” I replied, “You pick one.” He said, “On the first trip we took over about 18,000 men.” On later trips, both men said it was well over 20,000 for both ships (possibly as high as 22,000). (Note: that number was classified information at their time of service, not to be told by anyone who knew it, and official historical records today still reflect capacity numbers in conformance to Navy regulations established for each ship at that time.)

My response to such high numbers was, “How do you manage, i.e. house, feed, sleep, and maintain the order of that many men on a ship that was designed to only transport a crew of 1,000 plus just over 2,000 passengers?” Swanson’s response was, “It’s simple; you get a bunk for eight hours, another man gets the same bunk for the next eight hours, followed by another for the final eight hours of that day and then it starts all over again the next day. Your bunk is always warm when you get in it and it’s always warm for the next guy too.”

“Well,” I said, “what do you do and where are you when you are not sleeping or eating?” His response was, “Wherever you can find room to stand in the area you were assigned to and following orders.”

Next I asked, “With that many men being transported to the war zone, there must have been an awesome escort for protection.” Swanson quickly responded, “We didn’t have any escort; the Queen was too fast for the warships to keep up. We ran full speed all the time.”

I then asked, “What one thing do you remember most about those trips; what still stands out in the memory of your experience while on the Queens?” Swanson responded, “There was a flag pole up on the front of the superstructure of the ship and that flag and the pole always cast a shadow down below on the deck. Some of the men were always standing on the deck under that superstructure and they would stand watch. In the first years of transport service, we all kept an eye on that shadow and if it didn’t shift every so many minutes we would really get upset that we were not zigzagging to avoid the time required for submarines to site in and fire their torpedoes at us.”

Swanson also related that on two of the eight trips he made across the Atlantic, the Queen Elizabeth was returning with more than 6,000 wounded soldiers. His duties as a combat medic (which involved bandaging the wounded) allowed him to witness “the unbelievable ability of the human body to heal, recover, and avoid death where there is the will to live to come home and the right kind of care is provided.”

On his last trip across the Atlantic, Swanson said they brought back over 600 wounded soldiers from the Battle of Anzio in Italy. He did not know (could not confirm) if James Arness (of Gunsmoke fame) was among the wounded he helped return home. James Arness was wounded in the leg at Anzio and, except for the use of penicillin which had just become available, he would have died from the infection that had set in. The limp we all saw on Gunsmoke for 20 years was indeed real and from his injury at Anzio.

Note: Swanson and Santini were interviewed and their comments documented and preserved approximately five years ago. They both remained well at the time of submitting this document for publication. Anyone wishing to comment, share other related information, or otherwise respond may do so by contacting The Blount Countian or dwainecounts03@gmail.com.