Veterans Parade is on! 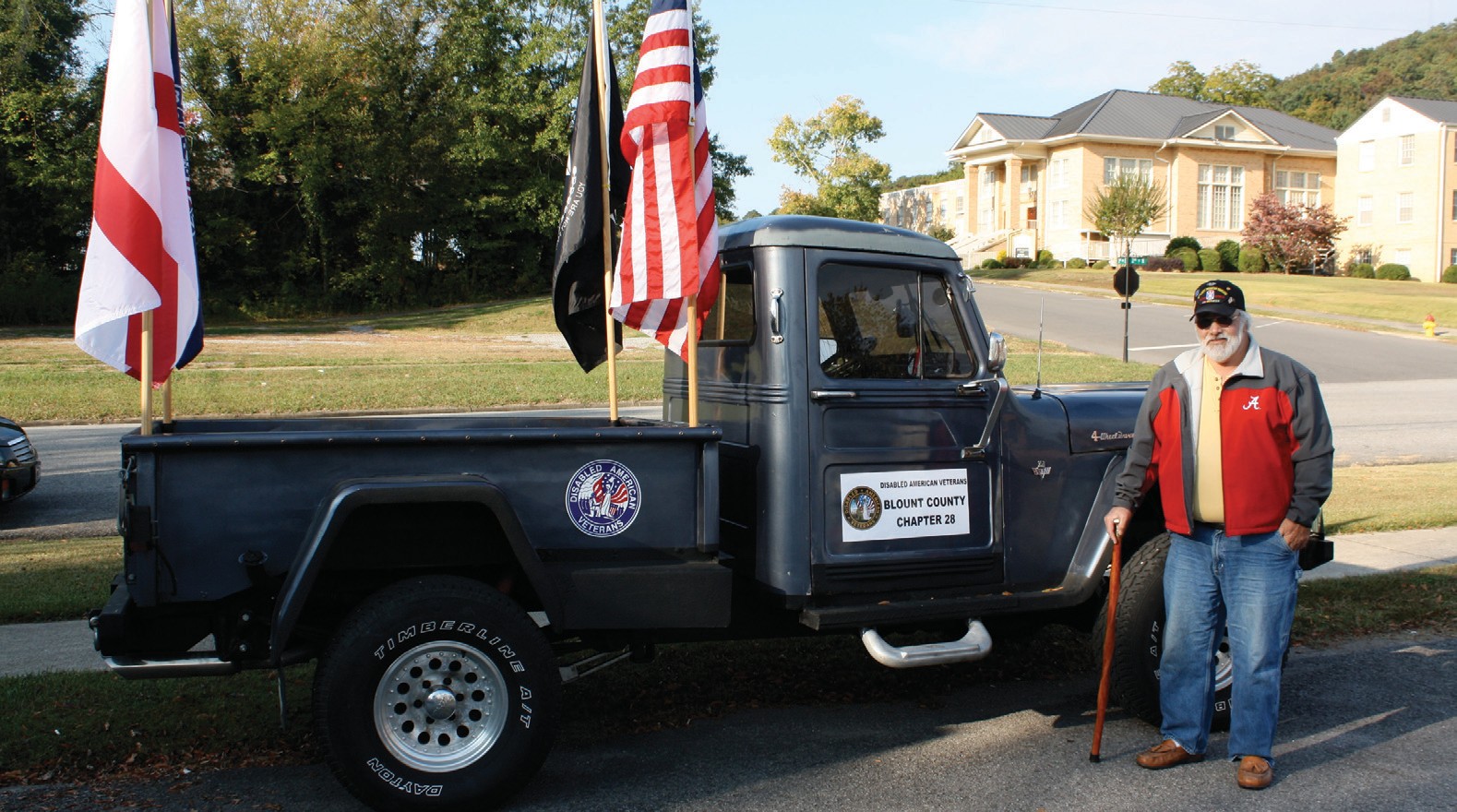 Vietnam Veteran Jeff Horn will drive his flag-decorated truck during the Veterans Parade on Saturday.

Three weeks ago less than 30 entries were registered, but with a recent influx in interest, the parade is now raring to go.

Operation Grateful Heart president Lester Hallman says he worried about the parade participation, but now sees people coming through and signing up.

“I’m very pleased we’re going to have it,” he said. “We’re looking forward to having a tremendous parade.”

Despite the impeding cancellation weeks ago, one veteran says whether the parade occurred or not, it wasn’t going to stop him from driving his company’s 1956 Jeep Willis Overland down the streets of Oneonta.

“It didn’t matter whether they had the Veterans Parade or not, this truck was coming down the highway on Saturday at 10 a.m., parade or no parade,” Jeff Horn, Vietnam Veteran, said.

Horn, of Oneonta, is the Sergeant at Arms of the Disable Veterans Association Chapter 28 of Blount County and has been a loyal parade participant since Operation Grateful Heart began sponsoring it in 2007.

“As soon as they give me that piece of paper about the parade, I fill it out and give it back to Amy,” he said.

Horn, along with his Jeep, proudly display four flags – the Stars and Stripes, the Alabama flag, the POW flag, and the Disabled American Veterans flag.

He says the parade is a representation of not only those who participate in it but also those who have passed on.

“It’s in my heart and soul,” he said. “We have served for this country. A lot of close friends’ and classmates’ headstones are at the Veterans memorial at the end of town by the flag pole.”

Two men will serve as Grand Marshals for the Veterans Parade.

Recently retired, First Sgt. John E. Hand Jr., of Highland Lake, began his military service in 1992 when he enlisted in the Army as a Bradley Fighting Vehicle mechanic. He served all over the world from Korea to Hawaii to Afghanistan.

Hand and his wife, Susan, have three children, Elizabeth, 15; Jon, 3; and Sage, 2. Hand will be transported by Bobby James Finley with the Fleet Reserve Association during the parade.

Captain Orville Ed Congdon, of Oneonta, will also serve as Grand Marshal for the Veterans Parade. In October 1942, Congdon enlisted in the Army Air Corps during World War II and was called to active duty in February 1943.

He graduated from flight cadet school in September 1944. He was later sent to the Pacific theater to join the 375th Troop Carrier Group in the Philippines. He flew low-level missions and frequently endured enemy attacks while delivering ammunition and supplies and landed on makeshift strips to evacuate wounded personnel.

During the Battle of Okinawa he flew 30 missions and was awarded an air metal and presidential group citation. He spent six months in the occupation force after the Japanese surrender and was discharged on April 27, 1946.

Congdon was recalled to active duty in 1950 to serve in the Korean War as a jet fighter pilot. He was sent to Japan and was promoted to base operations officer. He was discharged in April 1952.

Congdon is married to his wife of 69 years. They have three children, six grandchildren, and more than 20 great-grandchildren. He will be transported by Donnie Jackson, of Operation Grateful Heart, during the Veterans Parade.

Ken’s BBQ is offering veterans a special this Saturday as sandwich plates will be $3.