Apostrophe or no apostrophe 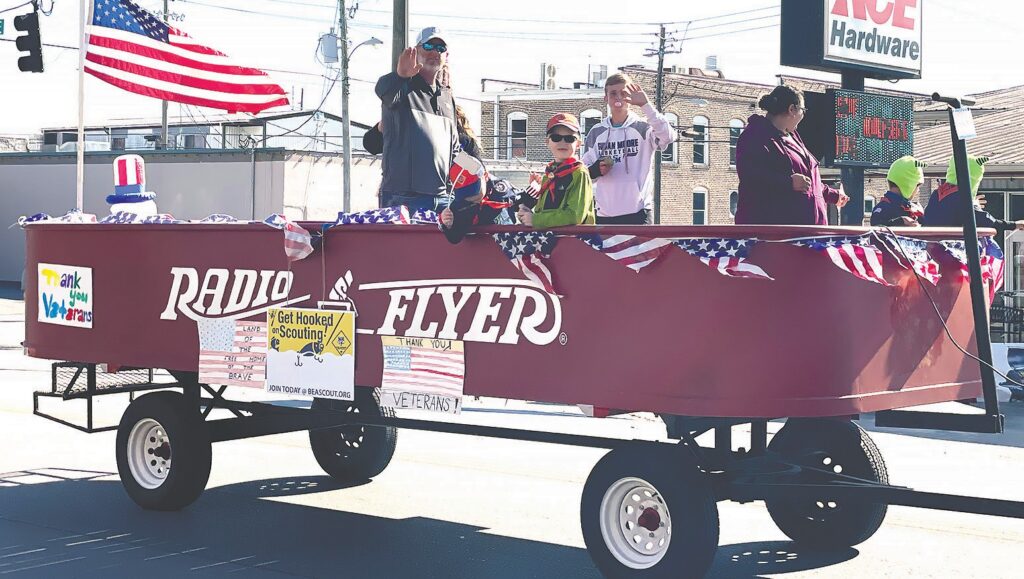 The Boy Scout Radio Flyer was one of many entries in Saturday’s Veterans Day parade.

Tomorrow, Americans will celebrate Veterans Day. It is a federal holiday to pay tribute to those who have honorably served in the armed forces. Nonessential governmental agencies will be closed, as well as many schools.There will be displays of flags, speeches, parades, and other patriotic activities to show respect to those who have previously served this country. In 2020, there were approximately 19 million U.S. veterans according to the Department of Veterans Affairs.

And while there is no confusion as to whom we celebrate on this day, the name of the holiday has provided its own source of confusion. Is it Veterans Day, Veteran’s Day, or Veterans’ Day? Although it is a conundrum and has been a hotly debated grammar rule over the years, the correct way is Veterans Day. There is no apostrophe.

But why avoid the apostrophe?

If you think about it, it is fairly simple. Use of apostrophe “s” signifies possession, such as a person or people’s holiday (St. Patrick’s Day, April Fool’s Day, and Mother’s Day). If an apostrophe “s” is added to Veterans Day, it implies belonging. The Department of Veterans Affairs says using an apostrophe “s” is incorrect because it is not a day “belonging” to all veterans; it is a day for honoring all veterans. In this case, “veterans” is an attributive noun. Attributive nouns modify another noun much like an adjective.

Okay, it may not be as simple as it seems, but just remember rules are made to be broken and this hotly debated grammar directive is one that defies the rule. And just to make your mind spin even further, Department of Veterans Affairs does not have an apostrophe either.

Now that we have the correct spelling etched into our minds, let’s look a bit further about Veterans Day and why it is celebrated on Nov. 11 each year.

World War I came to an end on Nov. 11, 1918, at 11 a.m., when a temporary peace, or armistice, was signed. A year later, President Woodrow Wilson declared Nov. 11 as Armistice Day in the U.S. It wasn’t until 1938 that Armistice Day became a national federal holiday and was dedicated to world peace and honored veterans of WWI.

The name was officially changed to Veterans Day in 1954 when Congress decided they wanted to honor the veterans of all wars including World War II and the Korean War. And while we now celebrate Nov. 11 as the official holiday, it was moved in 1968 to the fourth Monday of November, but changed back to Nov. 11 in 1978 by President Gerald Ford.

With all the changes as to when to celebrate Veterans Day, it is almost as confusing as why it is spelled as it is. To help, just remember this fun fact – the 11th hour of the 11th day of the 11th month is when the armistice was signed and that is the date we now observe it.