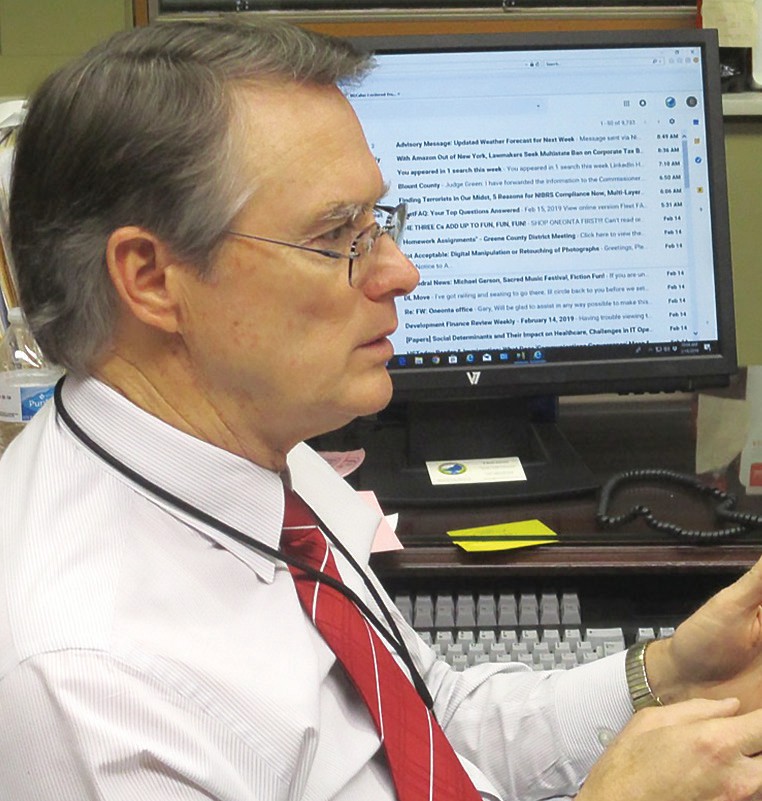 (Ed. note: – Because a number of questions were raised during the Blount County Commission’s recent resolution calling for a countywide referendum on converting from the district system to the unit system for county road maintenance, The Blount Countian consulted Commission Chairman Chris Green to get short answers to hard questions. Some answers are quoted, others paraphrased for brevity. Green asked to begin with an opening statement.)

Green: “It seems as if there is a contingent in the county trying to represent this effort as being directed toward getting a favorable commission vote on the resolution. But all we’re asking for is the opportunity for the people to vote on the question in a general election (the time when turnout is the highest). It’s due to the magnitude of the change that we feel people should have a voice in the decision, and we want to give them time to consider the unit system on its merits. The idea that there’s anything sneaky about it is just not right. I want to be clear that what we’re doing is giving people an opportunity to finally decide on an issue that has been debated for years. OK, ready for questions.”

The Blount Countian (TBC): Where’s the money coming from to pay the salaries for the new jobs created by the unit system – a full-time commission chairman, a full-time road superintendent, possibly a full-time assistant engineer?

Green: “The idea is to not expend any road funds on the new jobs but to pay for them from the general fund. First of all, there will be growth in tax revenues over the next six years that will help accommodate the new salaries. But beyond that, let’s take them one at a time. First, the commission chairman: the Blount County Commission pledged $1,000,000 to support building the Wallace State Academic Center. That obligation will pay out in 2023, freeing up $100,000 per year in the general fund that can be applied to salaries.

“Second, the road supervisor: don’t assume we’ll have to go outside the county and hire an experienced supervisor away from somewhere else. We’ve got those skills within the county, already on the county payroll, in fact. If we hire from within, we’re looking at a fraction – not the full amount – as the impact, only the amount of a promotion to a job with greater responsibility. I don’t know if we’ll have to have a fulltime assistant engineer or not – remains to be seen. But if we do, the state pays one-half of that salary, so the impact is much less than the full amount would be.

“One more thing: a commission chairman who can devote full-time to the job – developing relationships with state and federal government, representatives and senators at both levels, and government agency heads as well – can bring home enough money in the form of grants and programs to more than pay his salary, as well as realizing the purpose of the programs.”

TBC: What about other costs of conversion – for example, costs of consolidating the equipment fleet, modifying administrative systems, other changes in practices and procedures, etc.?

Green: “If legislation authorizing the referendum is passed, the commission has nearly four years to modify the organization. Changes will be made gradually and as seamlessly as possible over that time. In fact, some of the changes have already been made. Road complaints are already centralized, for example. If the vote is favorable, the commission and the county engineer will begin to put together the organization chart to develop conversion details. There’s a lot of detail of what needs to be done in the legislative bill itself.”

TBC: What’s the rationale for NOT reducing the pay of full-time commissioners by some reasonable amount when they become part-time?

Green: “In my opinion, at about $42,000, commissioners are underpaid now. Median household income in Blount County is $49,019, so compare it to that. Also, it doesn’t matter whether you call that job full-time or part-time, the fact is that an elected official is on duty full-time. They’ll get telephone calls at home all hours of the day, and every time they go to WalMart or to the auto parts store or wherever, they’ll be stopped by people wanting to talk about a problem. But the part-time language is important for another reason. It opens the job up to a whole new category of people with different skills – retired professionals, for example, who may not want to work a full-time job, but who have more diverse skill sets that the county needs for good administration.”

TBC: What extent of overlap or duplication would there be between the county administrator and the full-time commission chairman jobs? Some say you wouldn’t need both positions.

Green: “The main areas of overlap would be the review of county policies and finances, where they overlap now. But the county administrator is inundated by day-to-day issues and emergencies: questions concerning pay of county employees, payment of county bills, human resources matters and oversight, things like that. The commission chairman would be dealing with different people and different matters – many out-of-county – that would be a level above the daily clutter the administrator has to deal with. Also, the day is coming soon when one commission meeting a month won’t be enough. We’ll have to have two meetings a month like many municipalities and that will add to the chairman’s preparation load.”

TBC: What to you are the main advantages of the unit system over the district system? Would you say economies of scale like most businesses realize when they centralize operations is a major advantage?

Green: “Yes, but more than that, the unit system would provide continuity over time. One district has had four different commissioners in the last ten years. Lack of continuity in the process of managing road maintenance handicaps efforts to follow a long-term paving and maintenance plan.” (Green did not repeat the maxim that a commissioner elected for the first time usually takes a period approximating two years to complete the learning curve for real effectiveness on the job.)

TBC: How will current commission members stand to benefit from converting to the unit system as presently proposed?

Green: “There’s nothing anyone can point to to say this is going to benefit anyone currently serving on the commission. Look, why would I want to take on a load of stress like this, considering the controversy the unit system always provokes? The easiest thing for me to do would have been to knock it back in neutral and serve my term out quietly, but that’s not what the county needs for its long-term welfare.”

TBC: In 100 words or so, explain why you feel the county should covert to the unit system.

Green: “Keeping up with road maintenance is getting harder and harder because paving costs are increasing greatly, but revenue is not keeping pace. The unit system is not a quick fix, but it’s a step in the direction we need to go to handle the county’s growth in the next 10 years and beyond. One more thing: there are 50 counties in this state that operate under some form of the unit system. That ought to tell you something. There’s a reason the great majority of the counties operate under the unit system. One county chairman told me recently: ‘Converting to the unit system is awful, but if you can just get through it, you’ll look back on it as the best thing you ever did.’ The unit system is more efficient. It’s the right thing to do because it’s about taking the money you have – however much that is – and making it go as far as humanly possible.”