by Doug Sharp (special to The Blount Countian) 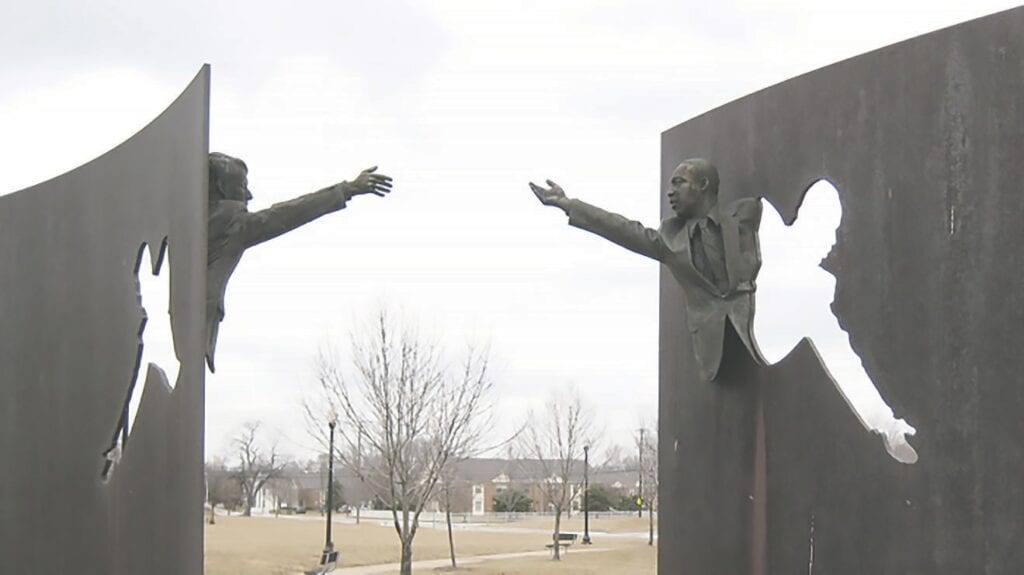 Landmark for Peace Memorial located in Dr. Martin Luther King Jr. Park in Indianapolis commemorates Robert Kennedy’s speech in the park the night of King’s assassination. Portions of Kennedy’s impromptu speech with its message of peace are engraved at a memorial in Arlington National Cemetery. The memorial, which features silhouettes of King and Kennedy reaching out to each other and to the heavens, was designed by Indianapolis artist and designer Greg Perry. You can listen to Kennedy’s speech via YouTube: www.youtube.com/watch? v=_bDlET_gK68. -Indianapolis Museum of Art

The minds and hearts of both men were focused simply on making our country a better experience for each and every American. Neither man was perfect; yet, the Bible shows us over and over again God doesn’t call those without fault to carry out His will, but rather He chooses those whose hearts are set squarely on the servant-hood of others.

Sadly, it was the last speech Martin Luther King Jr. would ever make. We all know how the last part of his hourlong sermon goes, but I also like this excerpt from it, “Let us rise up tonight with a greater readiness. Let us stand with a greater determination. And let us move on in these powerful days, these days of challenge to make America what it ought to be. We have an opportunity to make America a better nation. And I want to thank God, once more, for allowing me to be here with you.”

Then the prophetic ending, “Well, I don’t know what will happen now. We’ve got some difficult days ahead. But it doesn’t matter with me now. Because I’ve been to the mountaintop. And I don’t mind. Like anybody, I would like to live a long life. Longevity has its place.

“But I’m not concerned about that now. I just want to do God’s will. And He’s allowed me to go up to the mountain. And I’ve looked over. And I’ve seen the promised land. I may not get there with you. But I want you to know tonight, that we, as a people, will get to the promised land. And I’m happy, tonight. I’m not worried about anything. I’m not fearing any man. Mine eyes have seen the glory of the coming of the Lord.”

The next night, at a campaign rally in Indianapolis, Sen. Robert Kennedy delivered an unrehearsed speech to announce King’s death to the crowd.

A mere two months later Robert Kennedy was senselessly gunned down, just as his brother had been five years earlier.

Two great young men (one just 39 years old, the other only 42) committed to doing all they could to help lead our nation out of a deeply sick and disturbing darkness.

Sadly, both were rewarded by being assassinated for their effort and concern.

There are people today that do nothing more than take to social media daily ranting and raving about their fellow citizens and they, and others, have the gall to refer to themselves as “patriots.” They’ve sacrificed NOTHING! They don’t seem to even grasp the concept of true patriotism.

Let us NEVER forget or ever get to a place where we under appreciate the sacrifices made by so many true patriots on our behalf as a nation. I hate to think where we would be today without them.