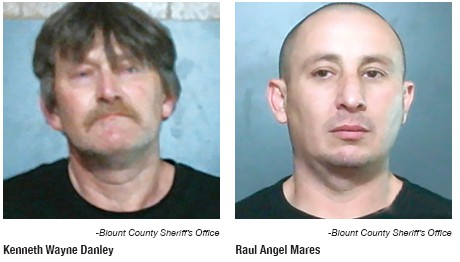 On Feb. 13, Kenneth Wayne Danley, 51, and Raul Angel Mares, 36, were arrested after the execution of two federal search warrants in Cleveland. Following a long investigation by the Drug Enforcement Agency (DEA) Task Force, the two were taken into custody and charged with trafficking methamphetamine. More charges are pending. Moon said, they “utilized a local business to facilitate drug transactions.” The sheriff’s office declined to name the business. Court documents show a Hayden address for Danley and Cleveland for Mares.

The search warrants yielded about three pounds of methamphetamine, two ounces of heroin, a pound of marijuana, and several firearms.

The DEA Task Force is made up of federal special agents and local law enforcement, which includes officers and deputies from Blount, Cullman, and Walker counties. Other deputies from the sheriff’s office, as well as officers from the Oneonta Police Department, assisted in serving the warrants.

Danley and Mares are currently in the BCSO jail on state charges with bonds of $1.5 million each while a federal grand jury indictment is sought. The operation is still under investigation.