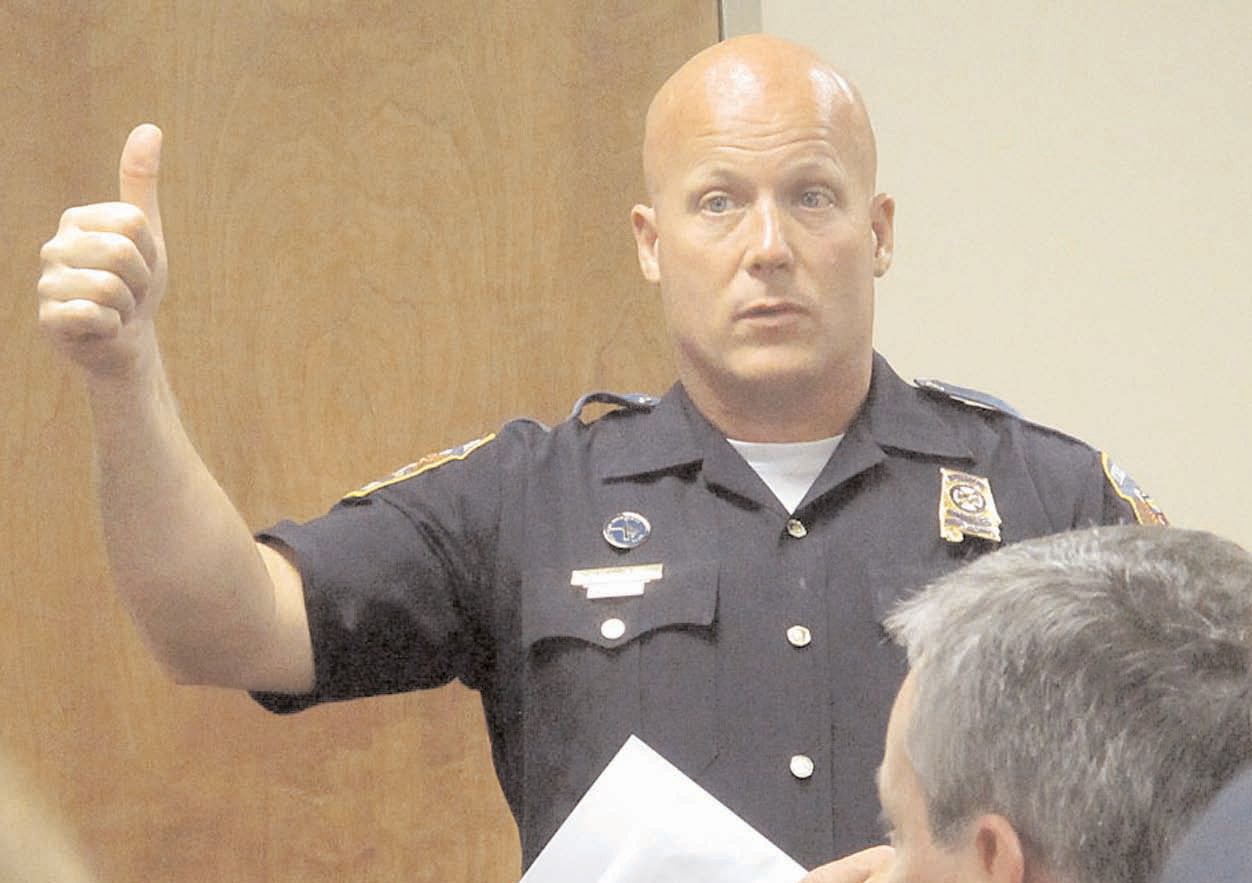 Senior Trooper Chuck Daniel (pictured) was the second half of a no-nonsense enforcement team, along with Decatur Trooper Post supervisor Captain Guy Rush. The message to Blount County: State troopers are coming in waves. Enforcement reduces accidents and fatalities and they’re going to enforce with vigor. Slow down, stop texting, pay attention to your driving, obey the law, or suffer the consequences.

“We’re gonna saturate Blount County (with state troopers), we’re going to tick a lotta people off (by writing a lot of tickets), and probably put some people in jail. It’ll last until our overtime runs out. In fact, this coming Friday night, you might want to just stay home off the roads.”

That was the unmistakable takeaway from last night’s emergency commission meeting on reducing the unprecedented spate of eight traffic fatalities in the last month on Blount County roads (including one in Jefferson County near the Blount County line).

Captain Guy Rush, supervisor of the Decatur State Trooper Post, with responsibility for traffic control and accident reporting on Blount County’s state and federal highways, said all of the above and more, assisted by Senior Trooper and public information officer Chuck Daniel, who lives in Blount County and works Blount County roads.

Other points made by Rush and Daniel:

• Enforcement works; it reduces speeds, reduces accidents, reduces fatalities; you’re going to see a lot more troopers in Blount County; state troopers are going to put everything they’ve got down here; spread the word – there’s an enforcement drive on.

• “We’re going to write a lot of tickets – slow people down.”

• “Texting is the new DUI. Everybody’s hiding it, but they’re still doing it.”

• The trooper post is requesting unmarked cars to zero in even more on people texting while driving.

• Other factors include topography – hilly, curvy roads, and inadequate attention to all factors affecting driving safety.

• Speed limits are for dry sunny days; driving speed should be reduced to allow for all other conditions.

• Wrecks worked by state troopers are caused by driver error “99 percent of the time.”

• Most dangerous thing you do in your life is drive a vehicle. Other notable points

Sheriff Loyd Arrington explained why the Blount County Sheriff’s Department does not emphasize issuing traffic tickets on county roads, though they are empowered to do so, and sometimes do make traffic stops if they observe reckless driving or speeding. The department’s main priority is to respond to citizen calls for law enforcement emergencies and assistance: 21,007 such calls to dispatch worked in 2016; 8,130 through 2 p.m., June 5, in 2017, he said. Quote of the evening

District 34 Rep. David Standridge, speaking to support law enforcement efforts to improve highway safety, said he had spent 21 years in law enforcement himself. He recounted an incident in which he was being made fun of by another person regarding his use of a seat belt. “In those 21 years,” he said, “I never unhooked a dead man from a seat belt.”

That might well be dubbed a closing argument for seat belts.