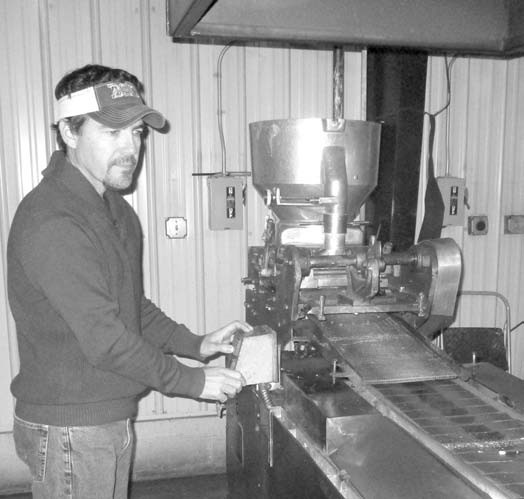 Raul Gonzales checks out one of the lines where dough is flattened into round pancake-shaped tortillas and sent to the oven. His prescription for management success is worthy of a business school graduate program: ‘Listen to what the business is telling you!’

When a company steps up the size of its operation by a factor of nearly 10, you might call that a dramatic growth spurt. But in keeping with owner Raul Gonzales’ understated but highly congenial personality, we describe it as merely “significant.”

It’s definitely that, as the producer of quality corn and wheat tortillas used in the preparation of a wide variety of Hispanic foods moves from its smallish 2500-sq-ft. facility in Allgood to the new 20,000-sq.-ft. warehouse-size production plant behind Wal-mart in Oneonta.

The actual move won’t take place until later this year as new equipment is installed and the interior of the new building is divided and partitioned to house the expanded operation.

To give you just a glimmer of its size, Tortillas Sabinas produces some 9000 tortillas daily, according to Gonzales. The size of the territory the company serves with its daily deliveries is breathtaking, given the modest size of the building it now occupies.

Take this in: Tortillas Sabinas’s territory stretches from Montgomery on the south to Memphis, Nashville, and Chattanooga to the north, and includes an area from east to west approximately the width of Alabama. Gonzales said his plans call for expanding next to include the burgeoning Atlanta market.

His target market is mainly Hispanic grocery stores, as well as a smaller number of Mexican restaurants that emphasize high quality ingredients, up-to-the-minute freshness, and authenticity of the recipe used for Tortillas Sabinas tortillas.

“Our emphasis is on quality,” Gonzales said.“Highest quality – always the highest quality. Low cholesterol, no preservatives, no additives of any kind. Only the healthiest tortillas. Quality and authenticity. That’s what we have to sell, and what we provide the market. Of course, that high quality costs to produce. We’re not the highest-priced product available, but we’re not the lowest either. It’s the quality that we want to make sure distinguishes our tortillas,” Gonzales said.

A lot of business people talk about quality. But Gonzales seems to live and breathe the ideal from theory to practice. Another core value of his belief system regarding business management could have come from the Wharton School of Business, but he expresses it more simply and persuasively. When considering decisions regarding the scope and operation of the business,“Listen to what the business itself is telling you,” he says.

“It is always telling you what to do by the results it is giving you. Expansion, marketing, hiring, borrowing – listen to what the business is telling you when you make those decisions,” he said. It is his mantra for sound management, and he invokes it more than once during the hour-long conversation for this article.

Plans for the future: expanding to Atlanta has already been mentioned. There’s also the prospect of expanding the product line to chips and tostadas, but that depends on – wait for it – what the business tells him, of course.

Gonzales was an elementary teacher by trade in Mexico before coming to the U.S. as a young man in the 1980s, he said. Before that, as an 8-year-old boy, he started a business shining shoes in his hometown of Sabinas, Coahuila, Mexico, about 75 miles south of Laredo, Texas. That’s where he started developing his guiding principle – “listen to what the business is telling you.”

“I loved my job as a sixth-grade teacher, but I wasn’t making enough money teaching to support a family,” he said.

That led to his coming to Blount County in the 1980s where he worked first as a landscaper planting and trimming trees, later as a construction worker at Jerry Tidwell Construction in Cleveland (during which time he became a legal resident during the later stages of the Reagan administration) and finally, in 2002, as an independent entrepreneur, mixing and cooking the batter for tortillas out of his home.

He listened to what the thriving business was telling him and moved later to a commercial location in Allgood, next to the former Pearson’s Restaurant. Still listening to the business, in 2009 he built the current larger facility at the intersection of Boat Landing Road and Ala 75 in Allgood, across from Busy Bee Food Mart.

Now, having built the much bigger location behind Walmart, Gonzales says the business is telling him he can expand production significantly, without expanding his 12- person labor force proportionally. Will expansion of the labor force come later? Perhaps, he said – depends on what the business tells him.

The “Sabinas” in the company name stands for his hometown. It refers indirectly to the type of tortillas favored there – corn-based as opposed to wheat-based. The latter are more in favor in the far north of Mexico along the Rio Grande, Gonzales said. But corn tortillas are much preferred in most of Mexico further south, and by those from Central America, too – not to mention being preferred by most customers in Blount County and the Southeast.

The name also reminds him sentimentally of a particular kind of tree he has fond memories of from the area he grew up. The tree is a Montezuma cypress – common name “Sabino”– and he remembers enjoying seeing big, spreading ones around a reservoir where he used to like to stroll.

Last things:“I forgot to say this while we were talking,” Raul Gonzales said,“and it’s something I should never forget. Please put this in the article: The main helper we all have is God. Without him, everything we try to do is impossible.”