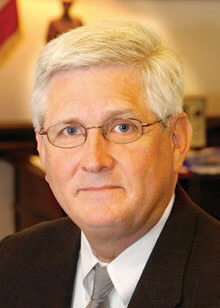 Tom Surtees, director of the state Department of Industrial Relations, will address the city-county chamber of commerce breakfast at Twin Oaks on Wednesday, April 22, at 7:30 a.m. Surtees is expected to discuss the worsening state unemployment picture, future job prospects, and the state’s economy generally.

Surtees became director of Industrial Relations in September 2007 after having served as state commissioner of revenue for three years. Before joining the Riley Administration in 2004, Surtees was vice president of human resources for Birmingham-based Citation Corp. Before working at Citation, he was an employee relations manager with Stockham Valves and Fittings Inc. in Birmingham.

Surtees serves in volunteer leadership positions with the American Cancer Society, Boys and Girls Club of Central Alabama, and Friends of Rickwood (Field, baseball park). He has been active through the years in the Business Council of Alabama, the American Foundry Society, and the Alabama Cast Metals Association. He served on the Pleasant Grove City Council and for six years on the Jefferson County Board of Education, four years as its president.

He is a 1979 graduate of the University of Alabama at Birmingham, having earned bachelor of science and master’s of business administration degrees. He served in the Alabama Army National Guard and the Army Reserves, retiring as lieutenant colonel in 1997.

Surtees denies having particular hobbies or personal interests, but if you’re looking for a conversational ice-breaker with him, try baseball. He’s a fan. “When you live in Hoover and work in Montgomery, you don’t have a lot of time to spare for personal interests – especially when the state unemployment rate is at over eight percent,” Surtees told The Blount Countian.