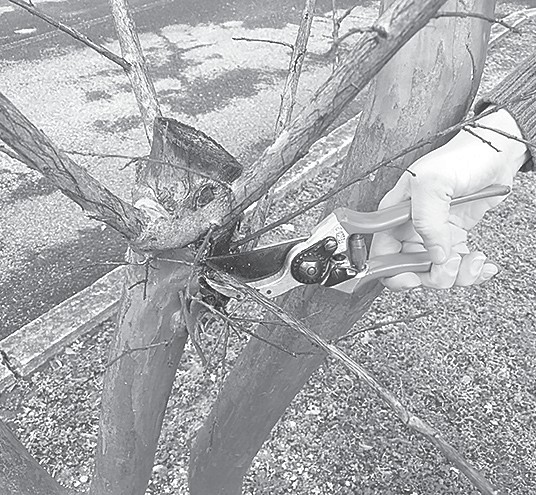 It’s that time of year when temperatures warm up a bit and we get anxious to get outside and do some work. Pruning is important to production in fruit crops and for proper maintenance of trees and shrubs. My recommendation: study plants that are in need of some loving attention from your pruners, loppers, and saws.

You may prune most evergreen shrubs any time during the year. This is true for woody ornamentals such as hollies, yaupon, and boxwoods. If you cut too much off a boxwood, it will be very slow to recover (if at all). I wouldn’t cut more than 4 or 5 inches of the stems back at one time. Cut them back in a slow steady manner over an extended period to achieve desired shape or height.

Foundation and landscape plants such as junipers, cedars, and cypress need only light pruning. Again, if you cut too far back into the old wood, they may not leaf back out.

Remembering the “May rule” will also help you decide when to prune a flowering shrub, such as an azalea. If your shrub flowers before May 1, prune it immediately after it blooms. If it blooms after May 1, the plant may be pruned in late winter, as in right now. A crepe myrtle is a good example of a mid-summer bloomer that needs pruning now, if necessary. The May rule is just a general rule of thumb. There are always exceptions, which is another reason to study up on pruning your plants before you get into landscape renovation.

Fruit trees need pruning for a multitude of reasons. Removing dead or diseased wood is important because this tissue harbors pathogens that can continue to attack the tree and the fruit as well. Take out any wood that is crossing or touching. It will eventually create a wound that may allow pathogens to attack the tree.

Heading cuts are made to reduce the overall amount of wood in the fruit tree and help direct tree growth. Always cut to an outside bud which will encourage the limb to grow out rather than to the inside. Keep in mind that fruit trees need good sunlight penetration into and good air flow through the canopy. A good rule of thumb is that a bird should be able to fly through the tree, or you should be able to throw a softball through it. This gives you some idea of how open the canopy of a fruit tree should be.

Shaded wood becomes nonproductive over time. When I see lower limbs that are shaded out I usually remove them, or the one doing the shading. It depends on which one I think needs to be removed. No two people prune the same. Ask two Extension agents how to properly prune a tree and you are likely to get two answers that are somewhat similar but not exact. Which is correct? They both are, one just has different experiences than the other.

Multi-trunked fruit trees are not recommended. The strongest limb on a tree is one that comes off at a 90 degree angle. It will support a heavy fruit or ice load, while a limb at less than 45 degrees, is likely to split off leaving you with a damaged tree and loss of fruit. You see this all the time with Bradford pears. Fruiting pears are bad to have parallel trunks as well; make sure you remove one of them. A central leader tree form is highly recommended for apples and pears.

Thinning cuts are also made to fruit trees. When a peach or apple blooms only five percent of them are needed for a crop. If a frost or freeze event doesn’t take some of the blooms off, the fruit will need to be thinned, which is a timely and costly undertaking. Fruit trees can be pruned from now until the fruit are nickel size. Thinning cuts are the most effective way to reduce the fruit load.

Other pruning tips include:

• Muscadines may be pruned from January until late March. The canes may bleed as we move later into the season, but this will not hurt the plant.

• Large blueberry plants, greater than 6 feet should be pruned in the following way. Remove one-third to one-half of the older, woody canes now. Cut them off 12 to 15 inches above the ground. This will stimulate new growth during the year, however this new growth will not have any fruit during the growing season. This is why we cut only half; you can harvest from the canes that were not cut back. Thinning and heading cuts can be made to the new growth in early summer. This will allow you to reduce the overall height of the plant and begin to shape the plant for better fruit production. The rest of the plant can be cut back the following year. Younger blueberry plants, less than five years, only need a few thinning cuts usually.

• If your figs are over 6 or 8 feet, it’s time to cut them back as well. Again, just select about half the taller stems and cut back to about 3 feet. As they begin to get tall again, cut them back at the height you want to hold them.

It is always easier to start with a young tree or shrub and properly train it as it grows rather than taking it on as a mature tree.

Safety should be considered when using sharp pruners, saws and loppers. Any tool that can cut a half-inch limb can remove a finger! Wear eye protection and don’t plant near power lines. Safety first!