Time to circle the wagons for some teams 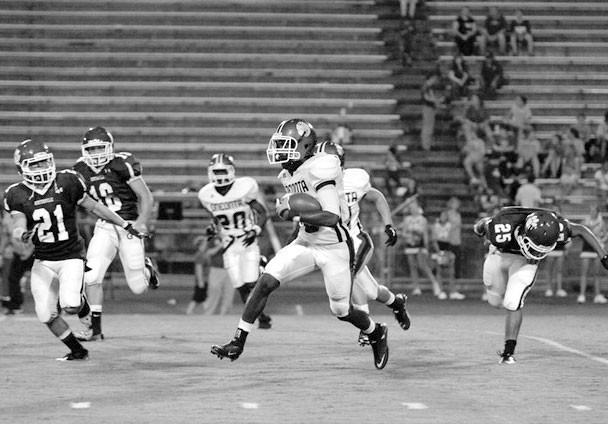 All eight schools in Blount County will be on the field this week and this week is region play for all of them.

Appalachian will get a chance – maybe their last one – to make a statement in 1A Region 6 and get back in the race as undefeated Falkville comes to the Mountain.

Cleveland travels to Ashville for a huge region game and a chance to meet an old friend in former head coach Mark O’Bryant, the new head coach for the Bulldogs.

Hayden will take their first road trip of the year and it’s a must-win kind of deal for the Wildcats in Moody.

Southeastern took last week off and faces a wounded bunch of Bulldogs from Addison.

Susan Moore finally gets to play a home game but they have a dangerous bunch from Saks paying a visit.

The Eagles try to avoid an 0-3 start.

The Blue Devils have looked very good so far this year but the level of competition is about to increase significantly. Falkville was able to just line up and run the football against Southeastern and did pretty much the same thing last week against Shades Mtn. Christian. In the win over Southeastern, Hunter Woodall (5’9, 140 So) ran for 170 yards and three touchdowns. He is obviously not very big but he has excellent speed and quickness. He runs behind an offensive line that has good size (avg. 235 lbs.) and this group has dominated the first two weeks of the season. The Blue Devil defense has given up some yards but hasn’t really been tested. The Falkville return units have been very effective.

Appalachian has to be getting tired of playing hard and losing close games. Unfortunately, the Eagles – who could very easily be 2-0 – haven’t been able to break through yet and it won’t be easy this week. The Eagles must get more consistency from the offense. Last week, James McMunn was the only Eagle able to do much on offense, especially on the ground. The offensive line needs to play well this week. It’s hard to say how good Falkville is across the defensive front. The Eagle defense must tackle well and not give up the big play. Appalachian coverage units will need to be very good this week.

Next week – Falkville returns home to host Meek while Appalachian gets a bye week.

The Panthers and Bulldogs haven’t played in 29 years but the Bulldog coach is a familiar face.

Cleveland played well last week against Susan Moore until the Bulldogs eventually pulled away late. Susan Moore had a size and depth advantage across the front – something that Ashville should not have this week. Nothing changes for Cleveland this week – the Panthers have to run the ball to be successful on offense. Ashville has played two good football teams (one very good team last week) and the Bulldog defense has had problems. Cleveland will need to run the football well and get more out of the passing game this week. Defensively, the Panthers have been solid but this week solid may not be good enough. Ashville has plenty of weapons. Cleveland must play well across the defensive front and get pressure on the Bulldog quarterback. Cleveland coverage units better play well this week.

Ashville has gotten off to a decent start under first-year head coach Mark O’Bryant, who is just three years removed from a stint as head coach of the Panthers. The Bulldogs picked up a big win over rival Springville in Week 1, Ashville’s first win in the series since 2003. The Bulldog offense is led by junior quarterback E.J. Moss (6’4, 220), a dualthreat who has the ability to run over or around most defenders. He has several dangerous skill players around him including senior fullback Cortez Bothwell (5’9, 165), who had 90 yards on 15 carries last week against Piedmont. Ashville was tied 13-13 in the second quarter with Piedmont last week but the No. 3 team in Class 3A wore down the Ashville defense and reeled off 23 unanswered points for the win. The Bulldogs do not have great numbers, especially across the offensive and defensive fronts. Ashville has some size but the offensive and defensive lines average just 215 lbs. There are several dangerous return men that are capable of making plays .

Next week – Cleveland returns home to face Piedmont while Ashville travels to Saks.

Desperate Wildcats need a win. Hayden did more than enough to win last week but simply made too many mistakes. The Wildcat offense had a solid night moving the ball but penalties in big situations proved to be too much to overcome. This week, the Hayden running game needs to continue to improve. The Wildcats got good production from three different backs last week and that means the Hayden offensive line played well. The Wildcat passing game has produced some big plays but there needs to be more consistency from the quarterback and receivers. The Hayden defense gave up some plays through the air but overall had a pretty good night against Springville. Moody will look to challenge the Wildcat defense between the tackles a bit more than Springville so the Wildcat defensive front will be tested this week. Wildcat special teams need to make plays.

The Redskins finally get to play a game at Gilbreath Stadium.

Locust Fork has scored 74 points in two games and hasn’t won yet. Of course, the Hornets have given up 113. Geoffrey Bramblett is on pace to throw for roughly 3500 yards and Todd Goodwin, Clay Smith, Taylor Bentley, and Josh Tawbush have each made plays this year. The Hornet offensive line has been fairly solid and Kyle Hornbuckle is a valuable option at receiver and in the kicking game. The Hornet defense has been overwhelmed by the running games of both New Hope and Sardis and the Lions had a lot of success through the air last week. It will not be any easier this week against an Oneonta offense that has plenty of talent, especially across the offensive and defensive fronts. The Redskins will look to cut down on the penalties – 12 for 97 yards last week and 21 for 167 yards through the first two games. The Redskin secondary held up well against Pinson Valley’s dangerous passing game in Week 1 but will be tested again this week.

The Tigers return and get a region heavyweight at home.

Sylvania has been pretty good on offense this year and just good enough on defense. The Rams got a pair of long touchdown passes in the fourth quarter to beat Sardis and then survived last week despite giving up 238 yards and two touchdowns from New Hope’s Jonathan Ford. The Ram offense is led by quarterback Zach King (6’1, 170 Sr), who threw for better than 300 yards against Sardis and then completed 9 of 14 passes for 154 yards and a touchdown and rushed for 143 yards against New Hope. Tyler Cooper (5’5, 170 Sr) rushed for 79 yards and four touchdowns last week and Keith Bender (5’9, 170 Sr) caught eight passes for 235 yards and four scores against Sardis. Sylvania is solid up front but there are only five players listed at 200 pounds or more on the roster.

Keith Garner picked up his first win at Pennington last week and you have to like how his team did it. Pennington got off to a rough start as Pisgah recovered a Tiger fumble in the end zone for a touchdown. However, the Tigers responded with 17 points in the second quarter and then shut out the Eagles in the second half. The Tiger offense has gone through some growing pains but sophomore quarterback Brandon Butts completed 11 of 19 passes last week for 260 yards and a pair of touchdowns. Sylvania has given up some huge numbers the first two weeks of the season and the Tigers will look to continue that trend. The Pennington defense will look to turn Tyler Love loose on the Sylvania passing game. Love destroyed Pisgah last week with 16 tackles, including four for loss, and two sacks. Mason Campbell came up big with 15 tackles, including two for loss. Those two will need to have the same type of numbers this week.

A wounded bunch of Bulldogs will visit pay a visit this week.

Addison started the year as one of the favorites in 1A Region 6 and probably should still be rated as one of the top teams. However, after last week’s woodshedding at the hands of 1A No. 4 Ragland. The Bulldogs and Purple Devils were thought to be the two teams that would battle for region supremacy but Addison never got going last week against the Purple Devils. The Bulldogs have installed a shiny new spread offense under new head coach David Smothers but the transition has not been an easy one. Senior running back Seth Robinson (5’9, 170) has been very good through the first two games but the rest of the offense has struggled. The Addison offensive and defensive lines were hit hard by graduation and the rebuilding is proving to be a work in progress. Southeastern has had a week off to rest up and look at film but it will still be tough for the Mustangs this week against an Addison team that is looking to get back on the right track.

The Bulldogs welcome the dangerous Wildcats to The Pod.

Saks opened the season against a physical Walter Wellborn team and had trouble hanging on late. The Wildcats looked much better last week against White Plains. The Wildcat offense is not sophisticated. They will look to run the ball behind an offensive line that has decent size (avg. 220 lbs.) but is nowhere near as big as the Wildcat lines of the last couple of years. Quarterback Timothy Johnson (6’0, 180 Sr) is a playmaker with a good arm and excellent speed. His favorite target is Tremon Smith (6’0, 175 Jr), who has the speed to get deep and the running ability to make plays after the catch. The Saks defense gave up a lot of yards and several big plays to Walter Wellborn but White Plains had trouble moving the ball consistently against the Wildcats 3-3 front. Smith is a terror on returns but Wildcat special teams are average.

Susan Moore’s offensive line paved the way for 461 yards last week, including 359 on the ground. That offensive line will need to be solid again this week against a Saks defensive front that will line up with three down linemen but then send five or even six on every snap. Saks has some size across the defensive front (avg. 230 lbs.) but the Wildcats will look to use their quickness against Susan Moore’s huge offensive line. Ryan Brown continues to develop at quarterback for the Bulldogs and he will probably have to make some plays down the field this week. Preston Kent had a huge night running the ball last week and lightningfast Sergio Olguin continues to develop as a playmaker for the Bulldogs. Defensively, Susan Moore has had trouble with the running games of West End and Cleveland. Saks will look to pound the ball between the tackles but the Wildcats also have the speed to get around the corner. The Bulldog secondary has been good against the pass but Saks has the weapons to make plays through the air. Susan Moore coverage units need to play well this week.

Next week – Saks returns home to meet Ashville while Susan Moore goes back on the road to face Weaver.