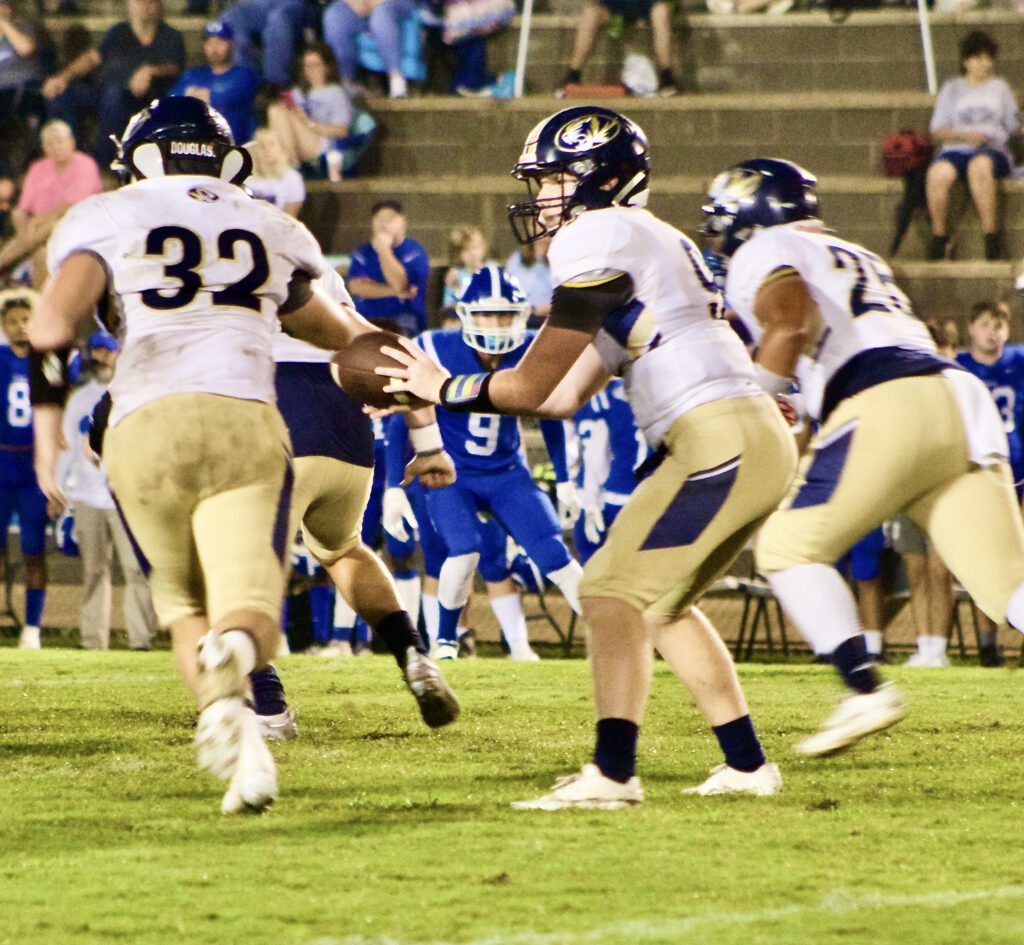 J.B. Pennington traveled to Oakman Friday night looking to keep their perfect record in tact. Oakman, 2-2 overall and 1-1 in 3A Region 6, had other ideas, however. The two exchanged touchdowns through the first three quarters, but the Wildcats scored the final two to top the Tigers 27-13.

Oakman struck first, scoring on a 20-yard pass in the first quarter. The extra point made it 7-0. Pennington closed the gap in the second quarter with a touchdown of their own when Hayden Floyd found Dillion Arnold for a 12-yard score. Jose Serrano’s extra point attempt was blocked leaving the Tigers down 6-7 going into halftime.

In the third quarter, Oakman found the end zone again. After missing the extra point, their lead was 13-6. The Tigers tied the game up on another Floyd pass, an 11-yarder to Jaxon Timmerman. Serrano’s kick was good to make it 13-13. Oakman got one more score in before the end of the quarter for a 20-13 lead.

Oakman’s defense stood their ground in the final quarter. Pennington couldn’t get the ball into the end zone, but the Wildcats got one more on a 50- yard pass play for a 14-point advantage. That lead held up as time expired with Oakman claiming the 27-13 victory.

The Tigers out gained the Wildcats 312 yards to 303. Pennington’s defense held Oakman to 61 yards on the ground, but the Wildcats passed for 242 yards on 15 completions. The Tigers finished with 202 yards on 21 completions and 110 yards rushing on 26 carries.

Floyd threw for all 202 yards scoring two touchdowns while also throwing a couple of interceptions, his first of the season. Josh Marquez was his leading receiver hauling in four catches for 73 yards. Timmerman caught four including one TD. Carter Heptinstall caught four for 35 yards while Arnold caught five for 28 yards and a touchdown. Jeremy Ortiz finished with four receptions and 24 yards.

Marquez was Pennington’s top rusher with 51 yards on six carries. John Williams finished with 47 yards on 14 carries. Both Floyd and Serrano recorded 6 yards.

Williams led the Tiger defense with seven tackles, one for a loss, and a pass break up. Isaac Murphree and Grant Austin both recorded six tackles with Austin also getting a couple of tackles for loss. Drake Sanderson and Dawson Phillips finished with five tackles. Sanderson added three fumble recoveries while Phillips added four tackles for loss and a pass break up. Finishing with four tackles each were Chris Allred and Marquez. Allred was credited with causing three fumbles and two tackles for loss and Marquez broke up a pass.

The loss drops Pennington to 3-1, 2-1 in region play. The Tigers get a break from region action this week when county-rival Cleveland comes to town. The Panthers are coming off a huge win over Spring Garden, the third-ranked team in 2A.