by Aimee Wilson and Todd Cassity 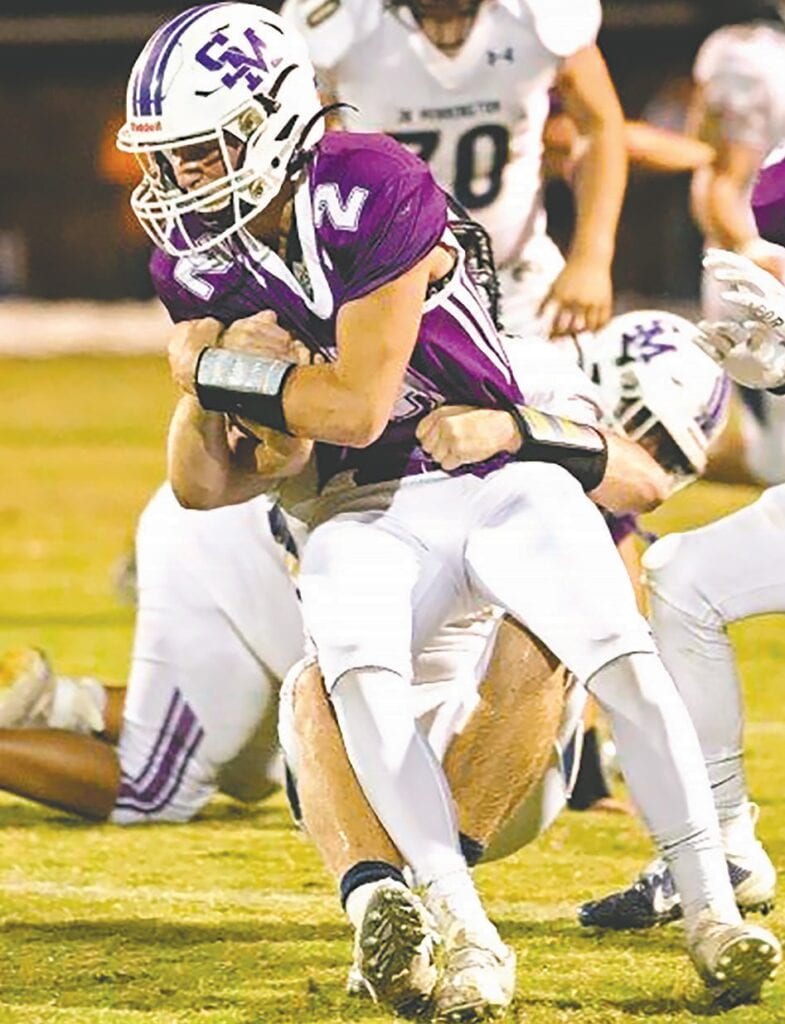 Camden Lackey is taken down by a Pennington defender. -Sherry Abercrombie

J.B. Pennington showed up at Larry “Pod” Patterson Field Friday night looking to avenge the 20-0 shut-out loss to the Susan Moore Bulldogs last season. By the time the final buzzer sounded, the Tigers had run for 150 yards, passed for 255, and posted 38 points. They outgained the Bulldogs 405 yards to 147 on their way to a 38-7 victory.

Much of the first quarter was a defensive battle, but with 3:35 left in the opening period, John Williams ran the ball in from the 13-yard line to get the Tigers on the scoreboard. Jose Cerrano kicked the first of his five extra points through the uprights for a score of 7-0.

The Tigers struck again just :09 into the second quarter. Hayden Floyd found Jake Mardis for a 15-yard touchdown pass. Cerrano’s second kick put them up 14-0. Midway through the second, the Bulldog offense started to get into a little bit of a rhythm. They fought hard for every yard with Lackey finally escaping defenders and running 10 yards to put the Bulldogs on the board. Axel Silva’s kick was good cutting the Tigers’ lead in half. 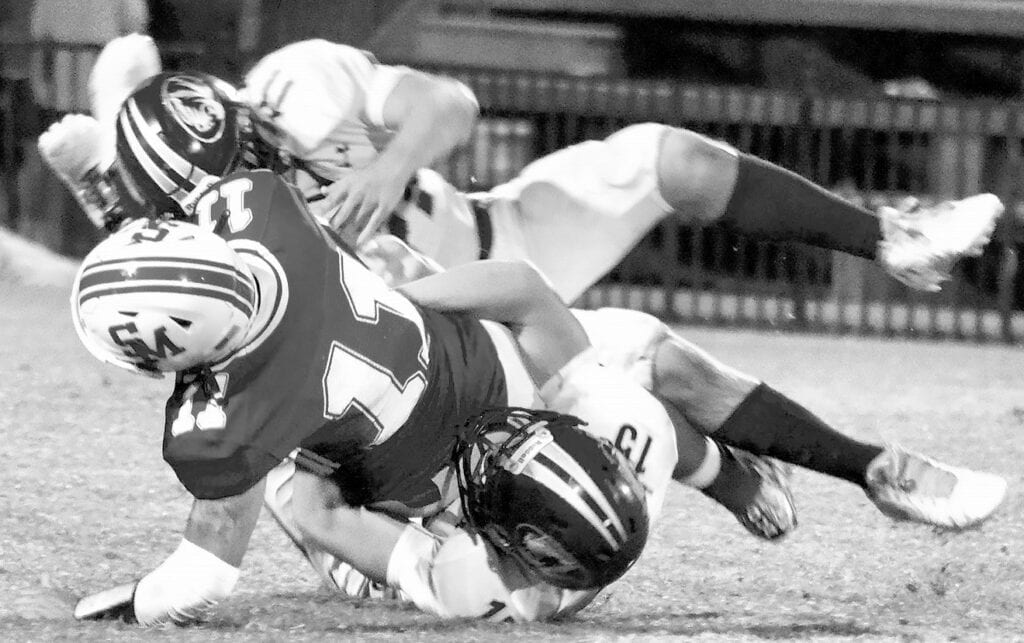 Pennington, however, wasn’t done. On their next drive Austin Wiggins ran the ball in from the 2-yard line for 6 more points. Cerrano tacked on a point for a 21-7 advantage. The Tigers got the ball back one more time before the half ended. With just 0:10 on the clock, Cerrano’s 24-yard kick split the uprights and Pennington headed to the locker room up 24-7.

The Tiger defense shut the Bulldogs down in the second half. Yardage was hard to come by as Pennington kept them out of the end zone for the remainder of the game. Pennington added two more scores, one in each of the final quarters. On a quarter back keeper, Floyd took off for 24 yards and a TD. Cerrano’s kick gave them 31. The final 7 points came midway through the fourth on a 2-yard run by Austin Wiggins and Cerrano’s kick.

Floyd ended the night with 325 total yards. He rushed for 70 yards scoring once, and he completed 24-of-32 for 255 yards with one touchdown and one interception. Sawyer Heptinstall led the receivers with 118 yards on 13 receptions. Jeremy Ortiz added 61 yards on three receptions while Mardis caught four passes for 47 yards and a touchdown.

For the Bulldogs, Lackey threw for 47 yards on eight completions. He ran for 27 yards on seven carries for the team’s only points. Derek Doty and Jose Calderon worked hard for their yardage on the ground. Doty finished with 44 yards rushing and Calderon had 35. Leading receivers were Brody Miller with two receptions for 15 yards and Doty with two receptions for 14 yards.

The Tiger defense was relentless in their coverage all night long. They allowed only 99 yards on the ground and 48 through the air. Chris Allred led the defense with 15 tackles (two for loss). John Williams and Drake Sanderson each had 10 tackles. Williams added a tackle for loss as well.

Zach Smith led the Bulldogs with 10 tackles while Nick Calderon had eight. Axel Calderon recorded seven tackles and snagged the game’s only turnover when he intercepted a Floyd pass.

With the win, Pennington is now 6-3 on the season and 5-2 in region play. Pennington, Vinemont, and Oakman are in a three-way tie for second place in Region 6. First round seeding will be announced later. The Tigers host the Locust Fork Hornets in their final regular season game Friday. The loss keeps Susan Moore out of the playoffs with a record of 3-6, 3-4 in the region. The Bulldogs’ Friday game against Cleveland has been canceled due to COVID.