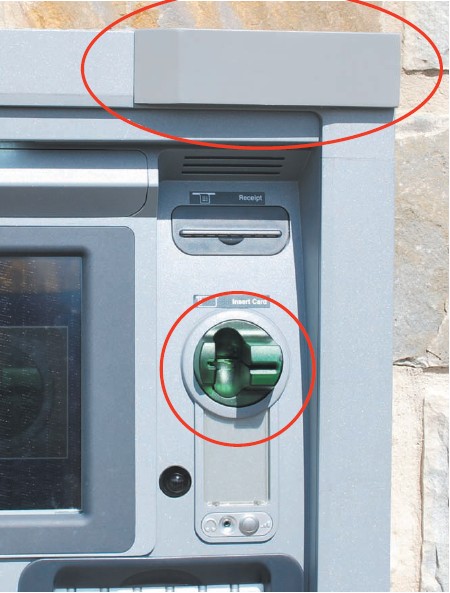 The gray, rectangular object ovaled in red at the top right of the photo is the device that records the customer as they key in a PIN. The green plastic piece circled in red is the actual skimmer that collects the card number from the magnetic strip.

Oneonta police Chief James Chapman announced the detention of three reported delinquents last week who attempted to retrieve a skimmer from a local bank ATM. The chief theorized the trio, following the most common scenario, had placed the device on the ATM at HomeTown Bank over the weekend.

Chapman reports such thieves prefer weekend actions when bank security is less likely active. In this case, however, bank security, alerted from a similarly failed attempt at its Pinson location, discovered the device and notified city police. Police then retrieved the device, cleared the memory chip, returned it, and staked out the location.

Investigator Shane Osborn reported that while manning the Sunday evening stakeout he saw the perpetrators removing the skimmer from the ATM. Once he stopped them, Osborn discovered corroborating evidence, and questioned them. They then admitted their actions.

Osborn said that from the beginning the three claimed they were juveniles. While he doubts the claim, police could find no way to disprove it. One male who claimed to be 16 appeared the best-versed in English. The other pair, one male and one female, said they were 15.

Chapman labeled the youths as illegal Romanian nationals. Osborn said the more talkative claimed they were gypsies, who had lived in the country most of their lives but had never attended school.

Originally transported to the county jail, officials felt they had to treat the suspects as juveniles and they were moved from holding cells to police headquarters. The city could not find housing for them in contracted juvenile facilities and kept them in a room at the police station with an officer present.

Chapman said that through DHR his office contacted Georgia relatives who then drove to Oneonta. He said the next day in juvenile court the three pled guilty and were placed on probation for supervision in Georgia.

While the crime is a federal offense, Osborn reported U.S. Secret Service agents said they saw little reason to act. They alleged that the delinquents would not be prosecuted in federal courts because of their juvenile status. Osborn understands two of the trio are in the process of deportation, but that will likely not occur unless they commit a violent act or have multiple convictions.

Osborn said Secret Service agents claim skimmer operations account for $40 million a year in theft. He reported that a Cullman bank lost $130,000 at two of its branches recently. Chapman reported that a Memphis financial institution reported a $160,000 loss a month or so back.