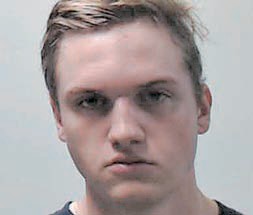 Stabbed were Gary Wilkerson and John Roberson and an unnamed juvenile. Wilkerson and the juvenile were taken to UAB Hospital for treatment and were reported to be in stable condition. Roberson was treated and released.

The offender, Atom Daugherty (pictured above), 19, was apprehended and charged with three counts of attempted murder. He is being held at the St. Clair County Jail in Ashville under bonds totaling $180,000. His court date is set for Feb. 2.