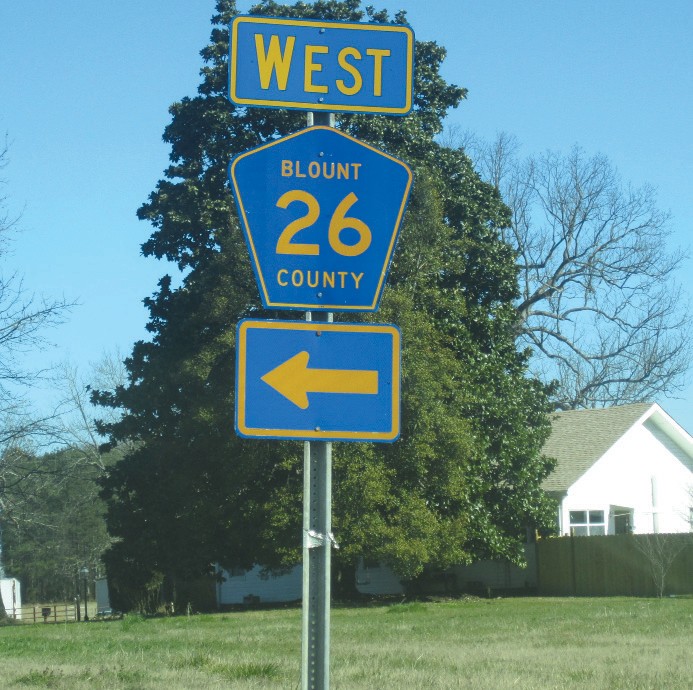 County road 26 traverses the county east to west from Ala 75 north of Hendrix, through Blountsville and on to the Cullman County line near Garden City. At 19.2 miles, it is the longest major collector maintained by the county.

Three more county roads have been selected for repaving through the Alabama Transportation and Rehabilitation Improvement Program (ATRIP) a state financing program that provides 80 percent of the costs of repaving qualified county roads and upgrading eligible bridges. The remaining 20 percent of the needed funds are provided by the county.

County road 26: 19.2 miles in District 2, from the Cullman County line at Garden City to U.S. 231 at Blountsville, then on to Ala 75 north of Hendrix; total cost, $3.6 million. About three miles of the road lies on the boundary between District 1 and District 2.

The total ATRIP funding is $2.9 million, with a required county match of about $728,000, for a total cost of more than $3.6 million for the three projects. Bids could be let by late this year if these projects are selected, with construction beginning as soon as 2014.

Projects submitted by counties and municipalities are analyzed, selected, and awarded by the Alabama Department of Transportation (ALDOT). Projects awarded last week bring to a total of 439 road and bridge projects selected so far across the state in the program’s first two phases. Total value of the projects is estimated at $613 million. ATRIP, originally announced by Gov. Robert Bentley in March of last year, is the largest road and bridge improvement initiative in the state’s history.

Blount County had one project awarded in ATRIP’s first selection phase last year: the 7.8 mile stretch of county road 27, leading from county road 29 near Highland Lake to the St. Clair County line on the way to Springville.

“This is major for Blount County. I can’t stress how important this is. It takes an almost impossible situation in maintaining our county roads and makes it possible, not only for us, but for counties across the state. This is a wonderful program announced last year by Gov. Bentley, and we need to make the fullest possible use of it.”

A timeline for the letting of bids for Phase 3 projects has not been announced.

It could be 2014 or later before work actually begins.

To qualify for ATRIP, a road must be designated a “minor collector” or greater. The classification reflects both traffic density and the strategic location of the road within the overall traffic flow pattern in the county.

Roads selected for repaving may not be the ones in the worst condition overall. However, an important selection criteria is that only roads eligible for federal assistance qualify for ATRIP. These tend to be longer, through roads or segments with unusually high traffic counts. Many local roads don’t qualify for federal or state assistance.

Bridges may also qualify for ATRIP if they have a sufficiency (inspectionbased) rating of less than 50 or are classified as either “structurally deficient” or “functionally obsolete.” Blount County has submitted no bridges under the ATRIP program, and will not do so in the final ATRIP phase, according to Sitton.