‘The people have the power’ 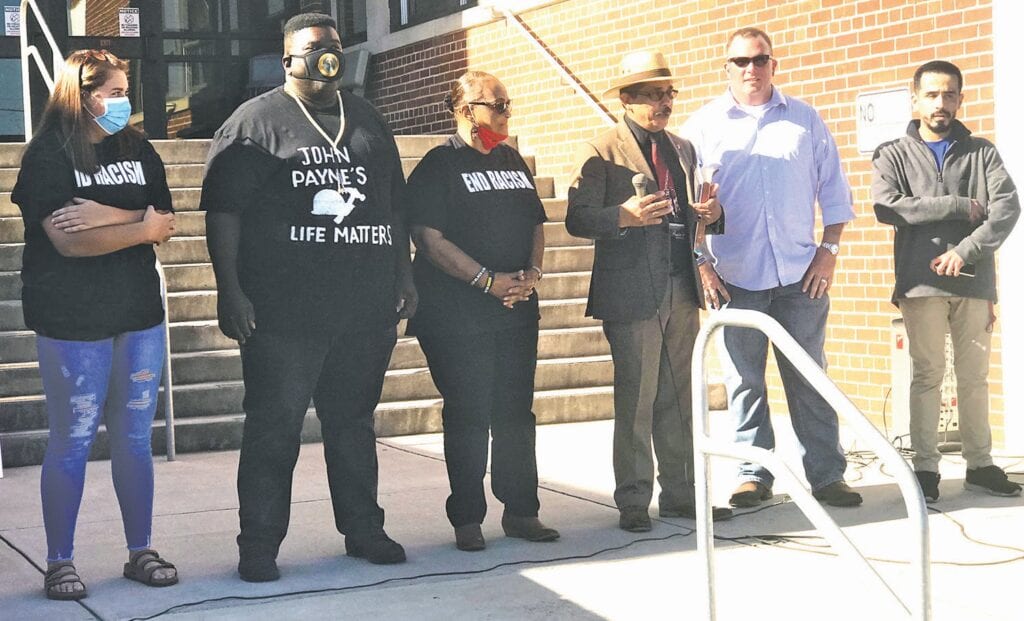 From left, Harper Simmons (daughter of co-organizer Rachel Simmons), Clarence Muhammad, Diane Lee, Matilde Acosta, Mark Moon, and Acosta’s son, who translated for his father, gather to pray at the conclusion of a rally held Saturday at the Blount County Courthouse.

When walking onto the courthouse grounds this past Saturday, one could easily hum the lyrics to Patti Smith’s “The People Have the Power” because in Blount County, they do. Armed with signs and black t-shirts that simply read “END RACISM,” people from all walks of life, both political parties, and those who “Backed the Blue” and believe “Black Lives Matter” convened together on the Blount County Courthouse steps to, as Smith sings it, “redeem the work of fools.”

Everyone stood together and demanded the resignation of Dean Calvert, who in recent weeks has been asked to resign for using a racial slur against John Payne and for the use of misogynist epithets towards women. Mob mentality? Maybe. But, according to Kris Murphy, mob mentality is warranted. He was busy passing out hand copied and bound pamphlets of the transcribed conversations and “apologies” made by Calvert. “We’ll keep handing these out,” Murphy said.

It is hard to not make comparisons to Thomas Paine’s Common Sense, a Revolutionary war-era pamphlet with much the same sentiment to gain independence from corrupt leaders. “Dean Calvert clearly crossed the line with his use of the ‘N word’ and his horribly offensive comments about women,” Murphy continued. “And he made it actually worse through his insincere apologies.

“He has not yet acknowledged his errors, both in what was originally said and all he has said subsequently. And so, it is now too late. It has triggered action by the Birmingham Water Works Board that is going to negatively affect every person in Blount County, not just his district – every district and every person.”

Also on the Courthouse steps was Willy Woods, standing in support of his brother-in-law John Payne and the Blount County Sheriff’s Department. It was easy to see the hurt in his eyes when speaking about it, but he emphatically said, “There is no hate in my heart [towards Calvert]. I don’t hate the man. I hate what he did, the things he said, the things he’s doing, and what the commissioners are doing and backing him up. That’s wrong.”

By Woods’ side was Oneonta City councilman Donald Bradley. When asked about his participation, Bradley explained, “Mr. Woods here and several of my friends have been directly affected by Dean Calvert’s comments. I’m here in support of my Black and Brown friends and neighbors and our community in general. I am here to denounce racism.”

As more and more participants trickled in, grabbed t-shirts and snacks, Desiree Stockdale arrived. Stockdale is a local activist who organized the Black Lives Matter march in June and has continued her activism through social media. At 23, Stockdale has made a giant impression on Blount County with her leadership and commitment to end racism. When asked about the protest, she said, “It means a lot to be here. It shows that we are moving forward, and I pray it continues.”

The line up of speakers was as diverse as those who came together. Matilde Acosta, a local pastor, began by proclaiming, “We are all children of God. We know it is not in the church we attend, but what we carry in our hearts that will create a better home, a better community, a better county, a better state, and a better country.”

Birmingham activist and founder of the Birmingham Black Economic Alliance Clarence Muhammad came back to Blount County to continue showing his support, not only for John Payne but for “all of you who are standing up against racism here in Blount County.” Muhammad attended the last business meeting of the Blount County Commission.He asked that day for Calvert’s resignation and vowed to come back every month until Calvert steps down. He promised again Saturday that we would keep coming as long as it took.

Diane Lee, wife, mother, and grandmother who moved to Oneonta five years ago, shared what it’s like to be a person of color in a small Southern community. “I love Oneonta! But having only lived in big cities, it took a minute to get used to it. I’ve grown to love this small town and the people in it. But I want one Oneonta and a better Blount County.

“By that I mean I want this city and this county to be the best city and county it can be for all of its citizens regardless of their skin color, income, where they came from.”

Lee believes that Oneonta and Blount County are on the right track as so many diverse people with differing ideologies were uniting as a single voice to “make sure Mr. Calvert knows there is no place for racism here or anywhere. There are more people on the right side of justice and equality than not.

“Where else but a little town like Oneonta will you see law enforcement protecting people marching for rights and equality for Black and Brown people? Where else have you seen law enforcement working to unseat elected officials who call Blount people horrible names and speak of women with such disgrace. So I believe it is possible to have one Oneonta and a better Blount County.”

Rachel Simmons, co-organizer of the event, shared that she was encouraged to see so many people from all walks of life come together in support of each other. She said that, while it’s a sad time here in the county, she agrees with Lee that this is the “beginning of what could be a new Blount County.”

Addressing those in attendance, she said, “Today and every day I encourage you to not fall into the pattern of hating our neighbors, rather attempt to understand them instead. This event was organized to show everyone that we all can be the light that drives out the darkness, the love that drives out the hate here in Blount County.

“We must put aside our differences and stand together as one with a common goal: fair and equal representation in our elected body, and to demand accountability and absence of corruption. Alone we can accomplish little; together we can accomplish much.”

Blount County Sheriff Mark Moon and Sheriff’s Department employee Jason Paul had been asked to come share how Calvert’s remarks have detrimentally impacted deputies as they face the very real possibility of losing an average of $1,400 of income if the BWWB follows through on plans to scrap the agreement they have with the department.

But Moon instead said, “My prayer today is that we, as a community, will get back to some form of love and unity that we haven’t felt in a long time. But look around at what’s happening right now. Here we are, we are all here united.”

Paul added to what Moon said. “Today, here in Blount County, Alabama, we stand here together. Yes, losing that income hurts. It’s going to take food off the table, it’s going to be hard. But our hurt, it in no way compares to the hurt that Dean Calvert has caused John Payne. This is not about a paycheck. This is about standing together. It’s about doing what is right.

“If you had asked me a month ago if systemic racism existed here, my answer would be no way. But I can’t say that any more. After Dean’s comments and the commission’s refusal to speak out against it, the answer is yes, yes it’s here in Blount County. It took something very bad to bring us all together, but we should have been together all along. For a long time there has been division between law enforcement and African Americans. Today, though, here in Blount County, Alabama, we stand here together.”