– both flavors – coming up this weekend and next 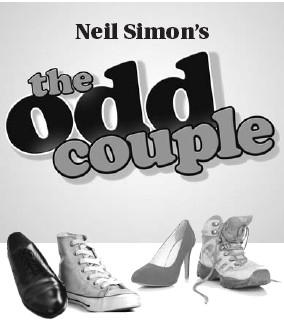 The Community Arts Council of Blount County will present the comedy The Odd Couple this weekend at the Frank Green Building auditorium at 7 p.m., Friday, March 4, and Saturday, March 5, and at 2 p.m., Sunday, March 6.

The performance this weekend is the ‘male’ version, with leading characters Oscar and Felix played by Ed Shirley and Scott Harvey, respectively.

Next weekend – March 11, 12, and 13 – the ‘female’ version will debut, with leading characters Olive and Florence played by Meagen Cardy and Valerie Clemons, respectively. Times remain the same: 7 p.m. Friday and Saturday and 2 p.m. Sunday. Both dramas are directed by John Cardy. Admission is $5 per show or $7 for both shows if purchased in advance.