The miracle of Mallory Brown 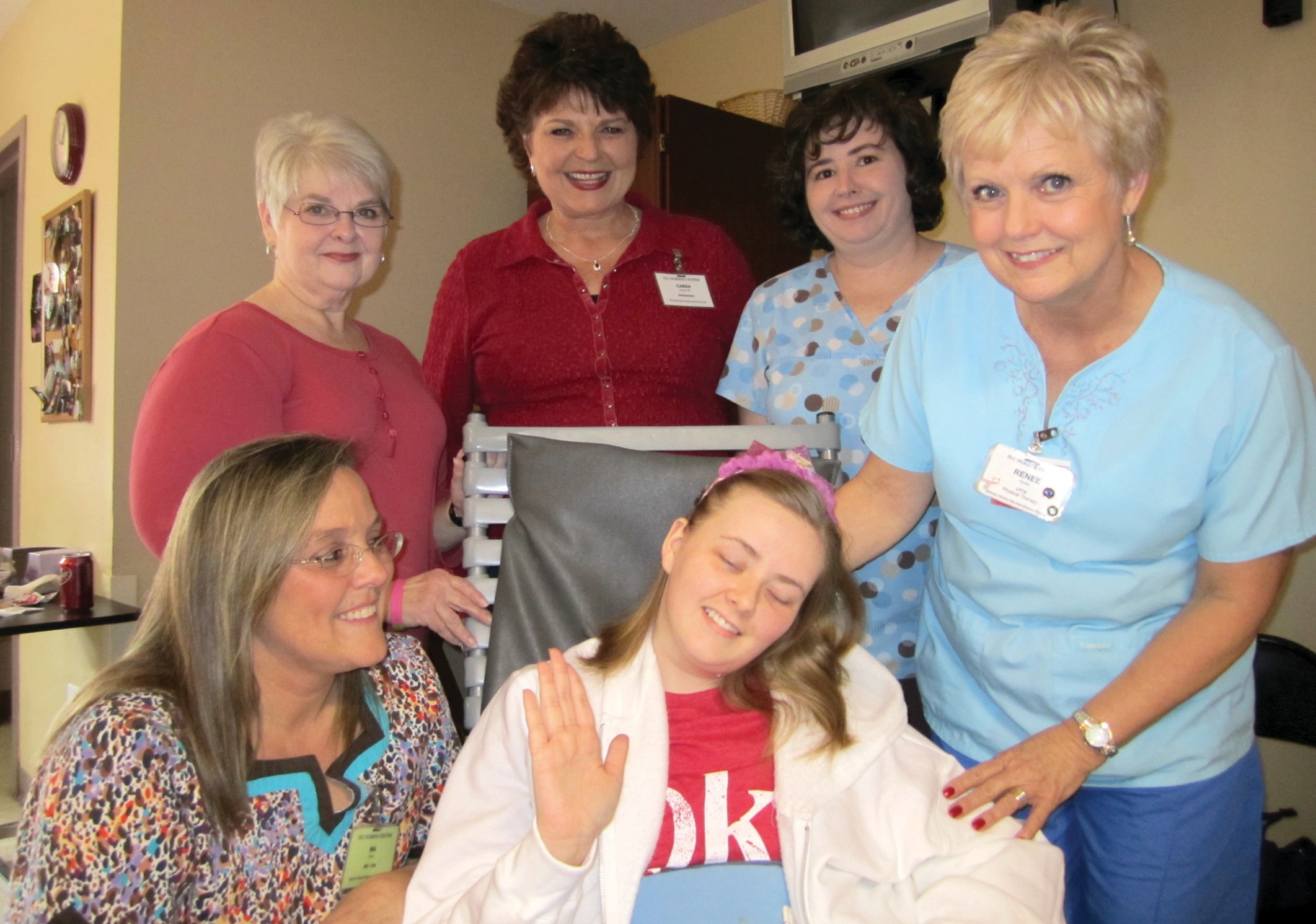 Last fall, Mallory Brown was poised to complete her senior year at Jacksonville State University where she was a secondary education English major. On Sept. 26, all that changed. She experienced a massive stroke that left her in a mildly convulsive state, and in intensive care at UAB hospital. Doctors held out little hope initially for her survival, none for recovery. 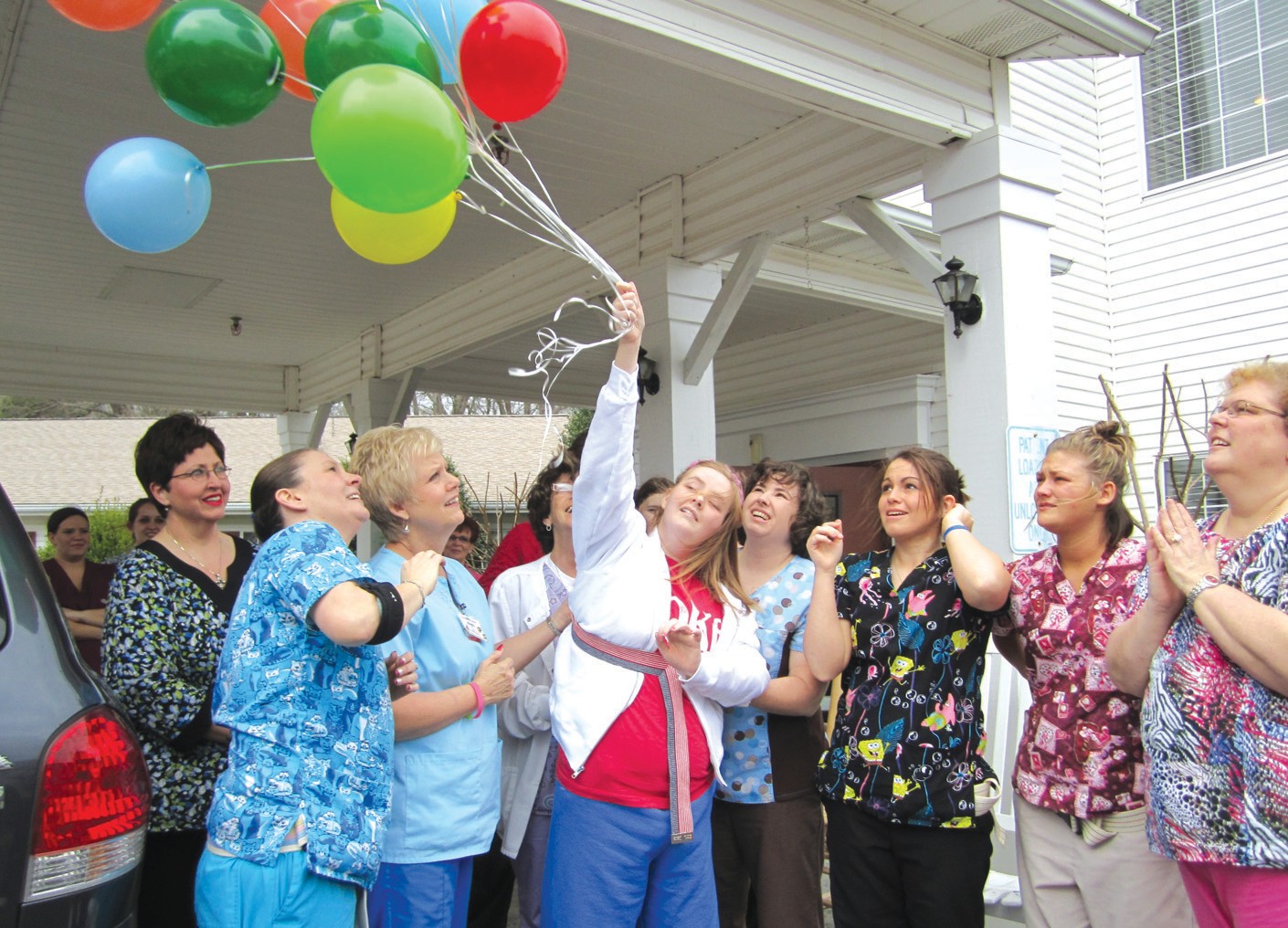 The symbol. Mallory releases balloons in celebration of her own seemingly miraculous release from the total bondage of her malady. She will undergo four weeks of intensive speech, physical, occupational, and music therapy, then return home for the first time since the day she was stricken on Sept. 26.

She was moved back and forth from UAB to a rehabilitation clinic for several weeks, then on Nov. 19 to TLC Nursing Center in Oneonta. She was unable to walk, feed herself, recognize others, respond to speech, or exert motor control over her own body. Though she had beat the odds so far, her prognosis was still grim. 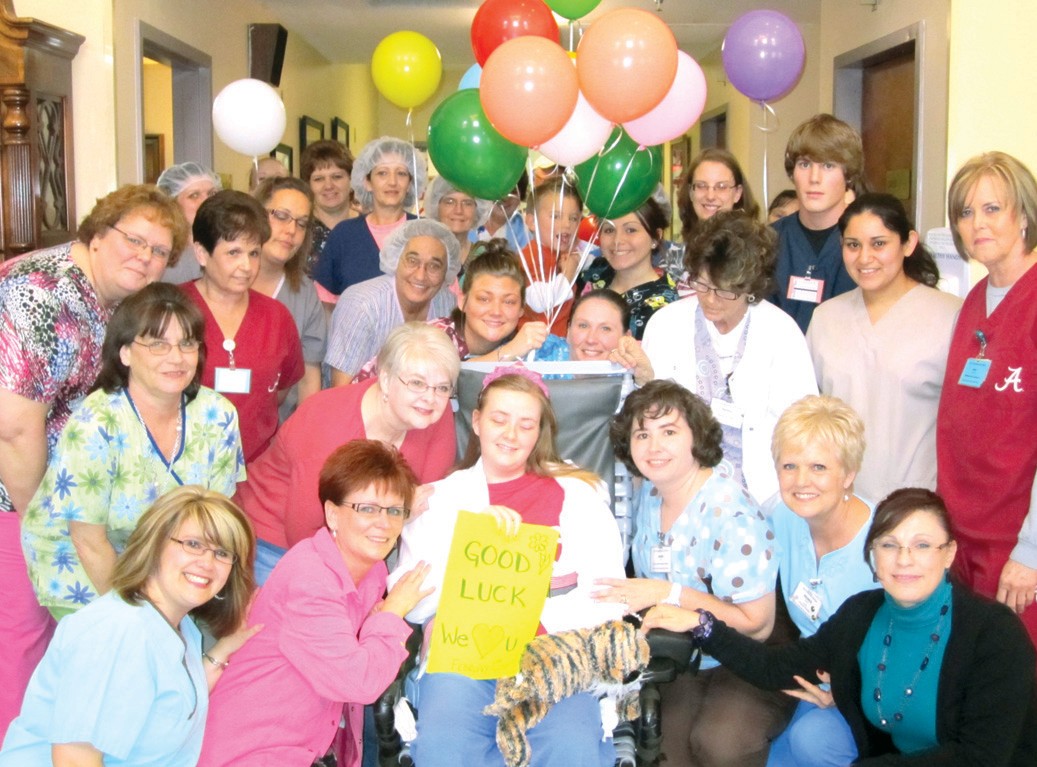 The send-off. Mallory captured the hearts of TLC staffers with a recovery that struck them as both miraculous and heroic. Over 50 of them jammed the hallway and closed ranks behind her as she prepared to depart last week for Lakeshore Rehabilitation to continue her comeback. Moments later, Mallory defied her own initial diagnosis by walking through the doors of TLC, with assistance, and getting into the car for the trip to Birmingham.

Then the miracle began. Through the waning weeks of the year, staff members at TLC worked tirelessly to help restore and rehabilitate basic mental and physical functions. Prayers of friends, family, other loved ones, and churches from around the county converged on Mallory’s recovery. Gradually, she gained control over her body movements, relearned to walk with assistance, began to feed herself, to respond to speech and communicate with signs, and became increasingly aware of herself and able to respond to others and her surroundings.

She forms words with her lips, but as yet, her voice isn’t strong enough to project them audibly. She can see, but full voluntary control over her eyes has not yet returned. Doctors say that requires the longest recovery time. But therapists at TLC say the miracle continues: she is still improving.

“We put our faith in God, and here we are,” said Donna Brown, Mallory’s mother, as they prepared to leave TLC for Lakeshore. “It’s been a miracle.”

“And these people here,” she said nodding toward TLC workers, “she would not have come this far if it hadn’t been for them. They’re been like members of an extended family.”

Ina Brown meanwhile leans close to Mallory to read her lips and relay her signs and whispers: “She says it’s God doing it,” Brown says. “What a blessing she has been to all of us. She’s touched everybody’s heart who has worked with her.”

So, the patient’s recovery helps the healers as well. Is there also a kind of miracle in that?