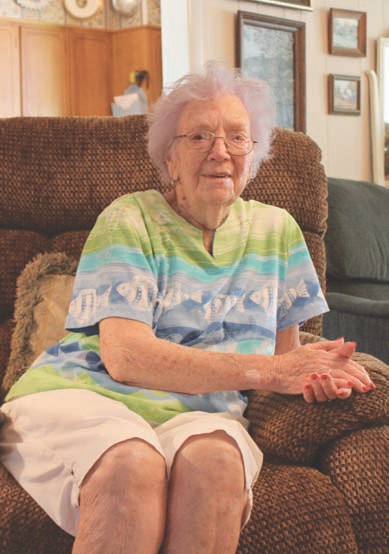 Doris Griffies encourages everyone to do one thing to lengthen their lives – travel. She says its the reason she will celebrate her 100th birthday on May 13.

“I have traveled all over,” Griffies, of Remlap, says.“And if I could, I would go to all of those places again because I enjoyed being there and meeting so many nice people and learning so many new things.”

Her family knows all too well about her adventurous side.

“She’s always been a wild one,” says Andrea Register as she holds a picture of her grandmother dangling from the top of a tree in Guam.

During the 1950s, Griffies husband, Thomas, served in the Air Force which took them to places such as Hawaii, Japan, Florida, and Massachusetts.

“There was always something new happening everywhere we went,” she says.“It was wonderful.”

After settling back in the states, Doris and Thomas continued to travel, whether that be a cruise or simply staying a weekend at Weiss Lake. She kept busy with hobbies such as gardening, crocheting, pottery, and porcelain sculpting. The couple also painted together and now those paintings hang on the walls of her home.

Even though she has traveled across the globe, Griffies found her way back to her family home in Remlap where she now resides, and amazingly she continues to take care of herself.

“She exercises and likes to go outside to sit and watch the birds,” Register says.“She also gives herself a bath, gets in and out of bed with no assistance, and likes to go into town. The only thing she doesn’t do is cook and clean, and she could do those if she wanted to, but who actually wants to do those things, right Granny?”

Griffies nods and begins to talk about how she has always eaten what ever she wants.

“I’m very healthy, but I’ve always ate what I wanted,” she says.“My favorites are ice cream and milkshakes, especially the jamocha milkshakes from Arby’s.”