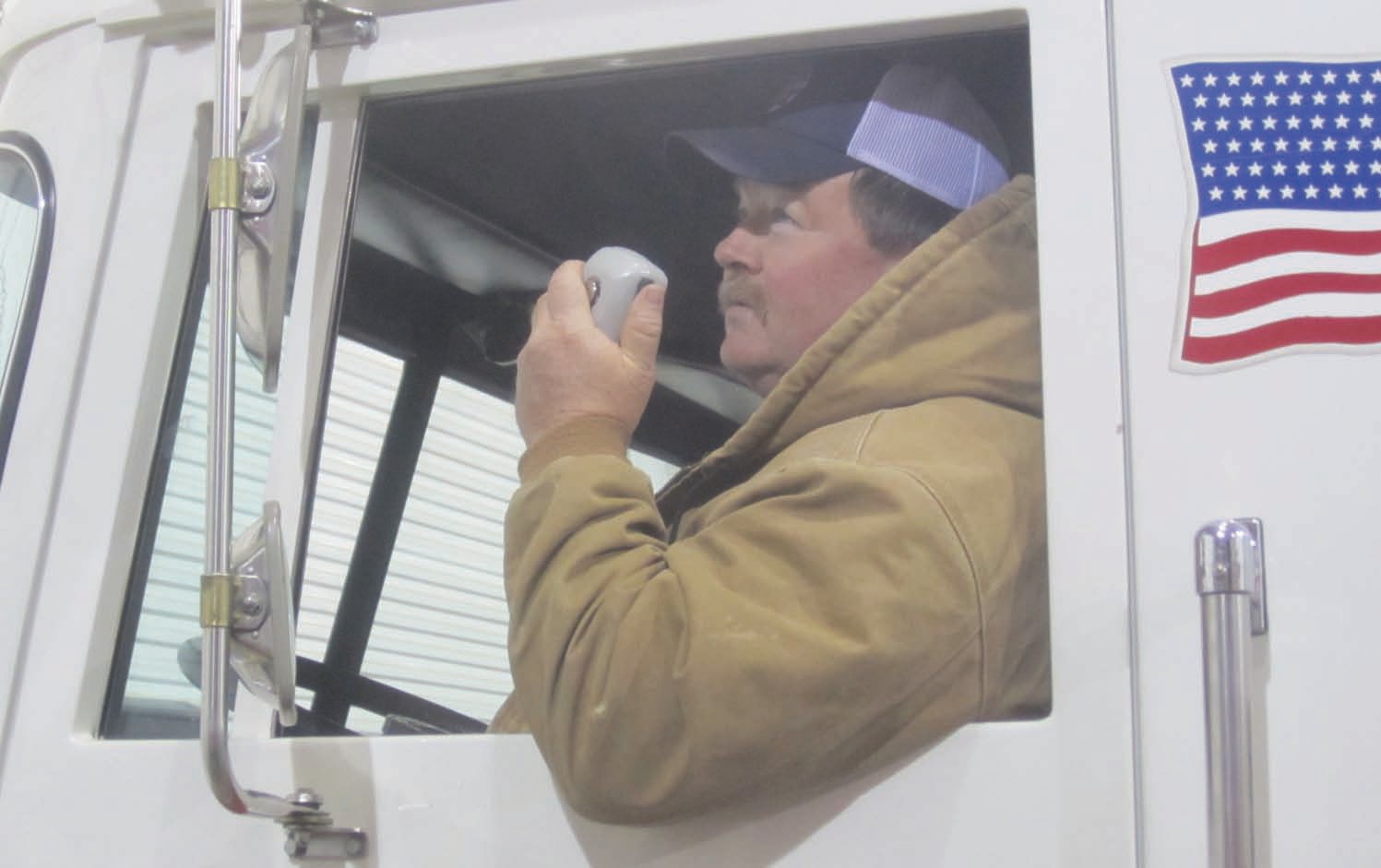 Sitting in the driver’s seat, Cleveland fire chief Steve Pass, also a member of the Blount County 911 Board, is in a crucial position to both critique and improve the two-way radio system that is the backbone of the county’s emergency response system. He’s not alone: of the seven-member board, three are fire chiefs and two represent law enforcement, including Sheriff Loyd Arrington and board chairman Tim Kent.

It’s been simmering, quietly and semi-below the surface for several years. The discussion over the radio system used to dispatch fire and police responders to emergency scenes has ebbed and flowed over that time, sometimes more actively, sometimes less so. The system is used to communicate back and forth between the dispatch center and trouble scenes in the field: status updates; who else is on the way and when they’ll arrive; requests for emergency support beyond those already en-route; needs and problems of those already there; and a myriad other details peculiar to each call.

The discussion has always been about adequacy of system performance to respond to undoubted emergency situations where the well-being – even the lives – of victims and responders alike are in play.

Everyone would like to have a perfectly reliable system – one that never compromises a situation already fraught with peril with less-than-adequate ability to communicate with others in the loop of emergency response delivery. Essentially that means fire and police responders on the one hand and dispatchers in the 911 center on the other, whose job it is to summon assistance to an emergency scene, relay messages, answer questions as they’re able, and dispatch additional assistance as needed.

The complicating culprit – as is often the case in any human endeavor – is cost. Starting with a system made up of transmitters, towers, repeaters, base station radios, mobile radios, hand-held walkie-talkies, and all the electronic components needed to tie them together, how much is it going to cost to make the system better? How much better does it need to be? Oh, and, come to mention it, how good – or how bad – is it right now?

Not as good as it needs to be, but tolerable? Not nearly good enough to keep those trying to respond to an emergency from getting hurt or worse in the process – thus, intolerable?

Sneak preview of the game plan

That’s the dynamic facing the 911 board that administers and manages the radio dispatch system. The dialogue on how to respond cranked up at its last meeting called to act on another matter on Oct. 28. A two-part approach emerged from those discussions: (1) do whatever can be done at reasonable cost to improve the performance of the existing system immediately and in the short term, and (2) develop a 5- to 10- year strategic plan to evolve the system in the direction dictated by changing technology to improve performance in the medium to long term.

In its next regular meeting on Nov. 20, the board will view a Powerpoint presentation by Branch on radio system parameters that will presumably initiate the strategic planning process for longer-term improvement.

Think of this debate, which has gone on for a decade more or less, as a pan of water, simmering recently on low heat on a stove eye for a year or more. A few weeks ago the heat got turned up again in connection with the adequacy of radio communication affecting responders in the western part of the county. It threatened to boil over. (How that happened is another story – much too much to go into here.)

The upshot was twofold: it catalyzed analysis of the radio communications system all over again. And it created enough discord, controversy, and hard feelings to complicate both objective analysis and the decision process going forward, though recovery seems to be in the works.

Here are the conclusions drawn by a neutral party, the writer, talking to both sides of the human part of the radio communication system.

(1) No perfect or near-perfect system is possible. That is to say, a system that is technically so good that a transmission to the field or from the field virtually never fails is, realistically, not achievable. (Why not? See item 3.)

(2) If it were technically possible, it would not be financially feasible. It would cost several million dollars, and there’s no known revenue source in the county or state that could support it.

(3) The main challenge in Blount County is topography – specifically the predominance of hills and hollers, ridges and valleys, mountains and “holes” that characterize much of the county and compromise radio signals. The challenge to radio signals is manifested in a number of chronic trouble spots, perhaps as many as 20 or more, scattered around the county, but mainly toward outlying areas, with a somewhat greater incidence in the western part of the county than elsewhere.

(4) In The Blount Countian’s informal survey of fire and law enforcement users, reports of the incidence of unsatisfactory communication ranged from 5 to 20 percent of the time, to 50 to 60 percent of the time, based on responses received from eight of the dozen-odd individuals queried. All responses, except one, were at one extreme or the other of that range. There were none in between. The exception was West Blount fire Chief J.J. Ivey who reported having trouble “getting out from anywhere” before his mobile units were corrected, and dramatic improvement once repairs had been made. (See item 7.)

(5) The radio dispatch system was designed to connect the dispatch base with mobile radios – radio units installed on fire and police vehicles and fire engines, typically having a power rating in the 45- to 100-watt range – and meeting design specifications for sending and receiving on the system.

(6) A secondary challenge (after topography) is that some of these units were not properly installed on their host vehicles; recurring problems include improper grounding and wrong type, size, or improperly installed antennas. Correcting installation problems on mobile units would substantially improve performance on those units, assuming the radios themselves meet specifications for operation on the system.

(7) Example: J.J. Ivey, chief of West Blount Volunteer Fire Department (VFD), recently had his mobile radios checked for technical performance by a wireless radio installation contractor. The check resulted from a ride-around with 911 director Caleb Branch in which all trouble spots experienced using his fire department mobile units checked out clear using Branch’s mobile unit installed to meet technical requirements. West Blount VFD’s mobile units were subsequently inspected: 8 out of 12 of them failed the inspection. Main causes were faulty antennas and coax connectors, Ivey said. He added that performance has improved noticeably since repairs were made.

(8) Cleveland fire chief and 911 board member Steve Pass reported similar experience.“ We don’t have a lot of problems communicating with dispatch – less than 5 percent of the time, I’d say. We’ve only got one trouble spot, down around Swann Bridge. Probably 99 percent of the time when we have trouble, it’s in our equipment, and when we fix the problem – poor grounding or whatever – that takes care of it.”

(9) Hand-held units. Many users in the field have problems communicating reliably with hand-held walkie-talkies. Many of the units are inexpensive, low-powered, fivewatt radios. Under good conditions, they can be used to successfully hear and talk to dispatch. Under conditions that generally apply in the field, they are often inadequate. While they will serve for field workers on site or near a call destination talking among themselves (going to the “talk around” channel, and not attempting to access the distant base unit), and can often receive signals from the dispatch center, they often cannot transmit successfully back to dispatchers at the center. They can’t “talk back” to dispatch.

(10) Much of the criticism of the radio communications system seems to center around problems experienced by those using hand-held radios trying to answer back to transmissions received from dispatch. The system, while it will accommodate such usage under good conditions, was not designed to produce reliable communication with five-watt radios across the range of conditions experienced in many field locations. In other words, they often fail to be able to talk back to dispatch. Fixing the problems experienced with hand-helds could only be achieved marginally, and that at great cost, according to Branch and longtime 911 board member Ken Campbell, an experienced radio expert: $10,000 a pop for each additional repeater – $110,000 apiece if you have to build an additional tower to mount it on. It might take several. And remember, that’s for marginal – read “not much” – improvement.

(11) Converting to a digital wireless radio system has been mentioned, and several counties have done so. Doing that would require snagging a federal grant to cover the roughly $2.7 million cost of converting the radio dispatch system. Then all users in the field would have to buy new digital units in order to be compatible. The cost to chronically underfunded volunteer fire departments would render that solution problematic. In addition, according to Campbell, the cost of maintaining a digital transmission system could run as high as $100,000 annually, an order of magnitude higher than maintenance costs on the existing analog system, and far beyond the foreseeable budget reach of Blount County 911.

(12) Left out of all the who-shot-John technical talk is any elaboration of human factors involved in the overall situation. Undoubtedly, those factors can be a significant problem, especially during times of peak demands on the radio system – like when there is a major catastrophic event like a tornado or ice storm that affects the whole county. Then you have six, eight, 10, or more agencies – fire departments, law enforcement, even county road crews – all trying to talk at once, and the system overloads. Technical problems like crosstalk and interference abound. People get excited or frustrated and don’t speak clearly. Sometimes, dispatchers may be trying to carry on multiple conversations at once. Saying confusion reigns would perhaps be an exaggeration. But stress certainly does.

Discussion of remedies includes addressing such human factors with training – both at the dispatch end and in the field – from the fundamentals of how close to hold a microphone to send a clear signal, to identifying yourself and your location precisely, to dealing with ambient noise, to speaking clearly and unemotionally, to making sure the dispatch signal is routed to the correct repeater – not necessarily a slam dunk when a dispatcher’s got three conversations going at once and he (she) doesn’t know who (or where) two of them are. Among other human foibles.

(13) Other technical approaches have been mentioned, and will be left to the experts to argue and resolve. For now, attention is focused on improving the system in both the short and long term. That’s what the 911 board is there for, and indications are that it will act to address problems being experienced, subject to constraints – namely cost – that, like it or not, both they and users in the field must face.