The campaign for Congress

Why they call it ‘running’ 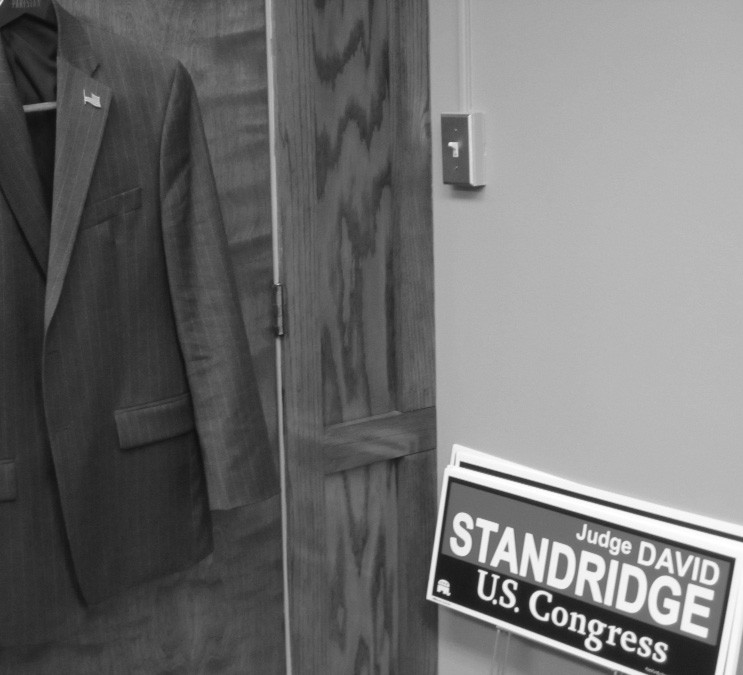 Sign of the times. Out of sight, but close at hand, in the office of Probate Judge David Standridge, are two symbols of his Congressional campaign: the political signs that supporters request at many campaign stops, and the much-traveled suit coat that gets only short breathers on its hook behind the door.

It’s David vs. Goliath, all over again. This time it’s for real as Blount County Probate Judge David Standridge hits the campaign trail in his quest to unseat 6th Congressional District incumbent Spencer Bachus – “Goliath” – from his fortified perch of 10 terms in office.

The Blount Countian caught up with Standridge several days ago to ask about the state of the campaign. A major take-away from the interview was a vivid picture of why they call it “running” for office.

One weekday, the schedule began with a trip to a courthouse in a distant county, which he toured, hosted by friendly county officials – introducing himself and making remarks in every department. That was followed by a visit to a grocery store, followed in turn by a trip to a large employer’s location in town. After that, it was stops at a beauty shop, a Walmart, a gas station, an advertising business, museum, restaurant, and sign business, always meeting people, introducing himself, giving them a chance to get acquainted.

On a similar trip to Chilton County on a subsequent Saturday, it began with breakfast at a Jefferson County restaurant, followed by stops at Jack’s and Durbin Farms in Clanton, then a tour of downtown Clanton – the barber shop, beauty stop, feed ‘n seed store, and pawnshop, among others. Then, on to Thorsby for lunch, then back north to work the Fultondale, Gardendale, and Morris areas in the afternoon.

So, what are the candidate’s thoughts so far? “I’m really enjoying it,” Standridge said. “I didn’t know how it would go outside of Blount County, but we have been really well received. I basically try to go somewhere or to something every day. That day I went to the courthouse, you might say I made a speech in every department. By the end of the day I could hardly talk. “I don’t have a million dollars like some of the other candidates, so I’m running a grassroots campaign. I have to get out and see people, and meet them and let them become familiar with me. We’re going to be able to do a little TV advertising later on. In fact, you may see spots on cable TV and occasionally on the Birmingham broadcast outlets now.”

What are his impressions of voter inclinations so far?

“I felt very good about my Blount County support, but I didn’t know what to expect outside of Blount,” Standridge said. “But I have been very encouraged. There are a large percentage of the people I’m talking to who are looking for an alternative. I don’t have to sell the idea of ‘we need a change’ at all. I just have to give them a sense of who I am.

“‘We want a regular person, just like us’ is something I hear often. People are thrilled with the idea of a normal person, not a career politician running for office. ‘Wow, somebody like us is running,’ they’ll say. Or ‘you never see this – an ordinary person running.’

“A lot of this reaction has to do with how people feel about Washington. But Rep. Bachus, as you know, has got some issues beyond that – that we’ve been hearing about in the press. A lot of it has to do with his length of time in office – 20 years. I don’t even have to bring up the matter of his financial dealings. People already are aware of that and they don’t like it. This district is up on the issues. People keep up. It’s a very informed Congressional district.

“What I’m hearing more than anything is ‘He needs to go. We need a change.’ My main goal, then, is to help people learn who I am and what I bring to the discussion.

“I have a relationship with a number of elected officials and others, especially in the counties like Blount: probate judges, commissioners, law enforcement people from my days in the sheriff’s department, school officials and school board members from my time on the school board. They can all help, along with volunteers working the phones, the internet, e-mails, and word-of-mouth from coworkers.”

Does he anticipate taking a leave of absence to campaign in the final frenetic weeks before the primary? “I don’t foresee doing that,” he replied. “I’ve been keeping up quite a pace campaigning and still covering my job, but I’ve been able to handle it so far with careful scheduling. I schedule my court work in the mornings, and have time for some trips in the afternoon and evenings, or I try to concentrate all my official work on one day, and free up the day after, things like that. Of course, my opponents are having to do the same thing. Spencer Bachus has his work to do, Scott Beason has to work around the legislative session, and so on. “ Standridge paused for a moment to catch his breath and take stock of what had been said, what hadn’t been said. “This is do-able,” he said quietly. “It’s not impossible. It’s do-able.”