The bookworm sez Wishing for a Snow Day 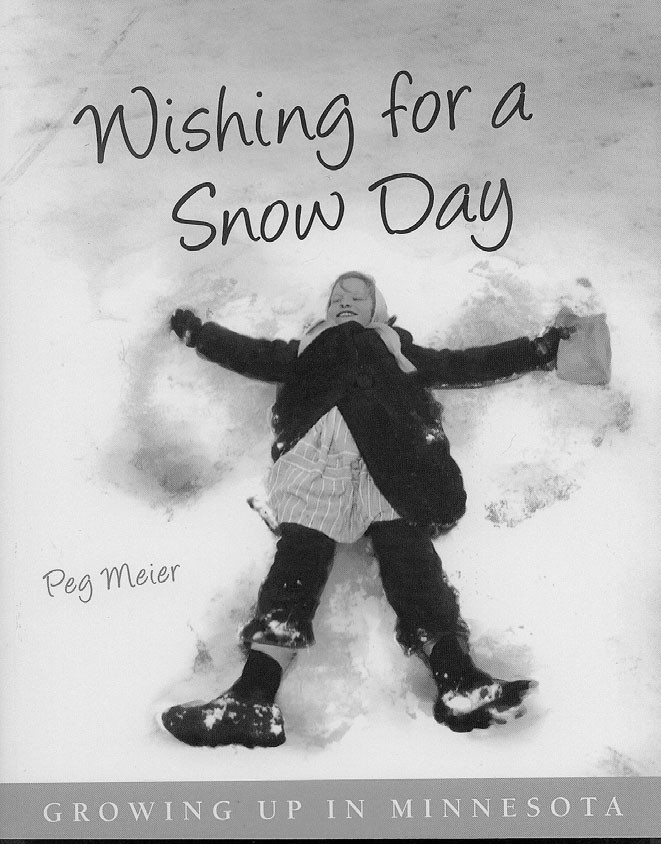 They are the stories your kids and grandkids love best.


They can’t hear enough about the time your father was horsing around, fell off a sled, and skidded down the hill on his hinder. They laugh at tales of your brother, who always managed to cheat at games. And they’ve heard about your childhood fishing trips so many times, they can almost tell the stories themselves.

Ah, the golden days, when cares were few, life was innocent, and families were close. In the new book Wishing for a Snow Day
by Peg Meier, you’ll read about childhood through the eyes of kids and former kids.

While “happily” digging around in papers and photos of Minnesota historical societies, journalist Peg Meier found a surprising amount of decades-old information about, and from, children who’d kept written accounts. What she discovered was, she says, “two entirely separate worlds”: childhood and the adulthood that remembered it.

When we think about childhood, most of us remember ours fondly: school days, favorite pets, best-loved toys, even chores make us smile.

For some kids, though, childhood was best forgotten.

In the mid-to-late 1800s and early 1900s, child abandonment was common, and orphans were sometimes treated like dogs; in fact, Humane Societies originally tended to both. Attitudes toward children were such that many considered kids to be merely small adults with adult-like abilities: Meier found, for instance, an account from 1892 in which a 12-year-old boy arrived in Minneapolis from Norway. He’d made the voyage alone and was supposed to meet his family there. They were never found.

Most children, however, were lucky: they were wanted, loved, and cherished. Toys might not have been too plentiful, but imaginations were. Pets weren’t always the dog-and-cat variety, and Mom was easy-going about otters and geese in the house. Swimming in the lake was a summertime ritual, snow was more than something to shovel, and a restaurant meal was a rare treat.

These were times when the Jesse James gang fascinated impressionable kids, fruit made excellent Christmas gifts, little boys didn’t wear long pants until age nine, and Orphan Trains pulled into town regularly. It was a time when children were shielded from talk of war, facts of life, and sometimes, their true date of birth.

Has this winter season got you thinking about wonderful times and memories past? Then you’re going to love spending some quiet, contemplative time with Wishing for a Snow Day.

Author and journalist Peg Meier did a stellar job in gathering together a wide variety of recollections and photographs, and what she found is priceless. You can’t help but smile at a skunk tale. Your heart will break at the stunned look on a bereft father’s face. You’ll want to tell your grandkids about the first time a little girl ever saw an apple.

While most of Wishing for a Snow Day
is set in Minnesota, the memories inside are universal for kids and former kids everywhere. Truly, this is a book to share with every generation. This is a book to wish for.