Learning about the Civil War 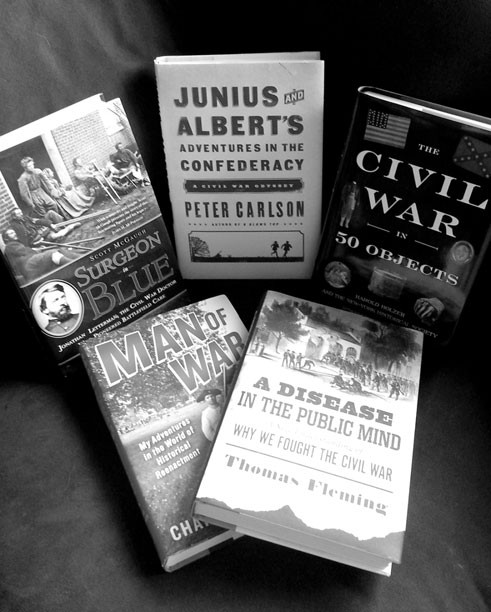 You’ve had a few differences with your neighbor.

His car in your driveway almost drove you crazy. He says your dog barks too much. You don’t think he takes very good care of his yard, and he hates your Saturday morning mowing sessions. You think his parties are loud. He thinks you’re too fussy.

You’ve had your differences, yes, but you work them out. More than 150 years ago, however, a neighbor- againstneighbor war began that didn’t end over a friendly cookout in someone’s back yard. You know all about the Civil War – or do you? In these great books, you might learn more…

First of all, why did the Civil War happen? Was it because of race and slavery, or something else? In A Disease of the Public Mind by Thomas Fleming, the author digs deep into why there was a war between the states, starting years before anyone picked up a gun at Fort Sumter. This isn’t a book one would want to browse – it’s detailed down to the smallest item – but scholars of the Civil War will find it very interesting and, perhaps, thought-provoking.

Those same scholars, as well as casual historians, will enjoy The Civil War in 50 Objects by Harold Holzer and The New- York Historical Society. In this book, the authors examine 50 minor and major objects to explain how they played a part in the War: paintings, photographs, books, a “draft wheel,” military buttons, entry to a fair and more, each having something to do with what happened during that time.

We might not know quite as much about the war without the journalists who covered it, and in Junius and Albert’s Adventures in the Confederacy by Peter Carlson, you’ll read about two men, both reporters, who were captured and imprisoned, escaped and returned to their home in the North with the help of some unlikely people. I thought at first that this adventure story was a novel, but no… it’s entirely true.

Though it may seem at first blush that nothing good comes from war, Surgeon in Blue by Scott McGaugh proves otherwise. This is the story of Dr. Jonathan Letterman and his work in battlefield medical care, without which countless lives through the last 150 years might have been lost. I was fascinated by this book, and if you’re a Civil War buff, I know you will be, too.

And finally, though it’s not strictly about the Civil War, Man of War by Charlie Schroeder takes a fun look at the culture of historical re-enactment. Schroeder traveled around the country to participate in as-accurate-as-possible battles with people who took their roles very seriously – even though this book isn’t so much.

Without a doubt, there are dozens more books on the subject of the Civil War that have been released recently, and in the future, there will be dozens more. These five books are a great start, however, to a unique perspective on the War and may also be excellent volumes to share with your neighbor…

The bookworm is Terri Schlichenmeyer. Terri has been reading since she was 3, and she never goes anywhere without a book.

She lives on a hill in Wisconsin with more than 11,000 books.