THE BIBLE SPEAKS Fear no darkness 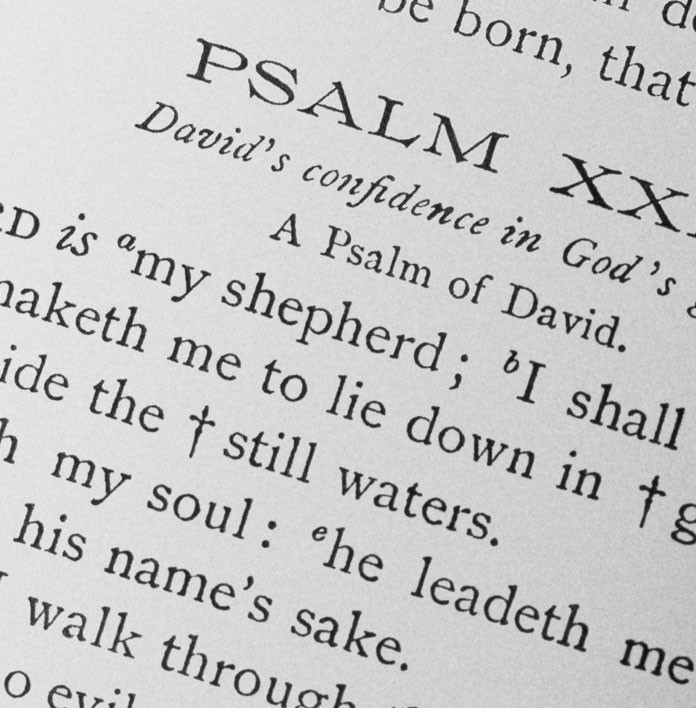 One summer during my seminary years, I worked as a laborer at what was then the Armorcast Co., a military tank factory in Birdsboro, Penn. After several weeks of arduous labor, the project safety engineer told me I was to be his assistant. That sounded considerably better than what I was doing. In fact, as it turned out, my job would be to patrol a long, high-voltage power line on the floor of the plant to make certain that no one would try to cross over it, thereby receiving the shock of his shortened life.


It was a much less demanding job, but it was almost equally boring. On the third day of this new responsibility, as I walked the long track, my mind turned to the verse I had read that morning, Galatians 2:20: “It is no
longer I who live, but Christ who lives in me.”
I began to try to express this idea in verse, but I had no pencil and paper to write it down, so I picked up a nail and a piece of packing crate and scratched out the words:

He lives within my heart, unworthy though it be,
And guides my wayward feet o’er paths unknown to me.

He lights the way before me that pitfalls I may see,

And thus, no darkness need I fear, for Jesus lives in me.
REFUGE AND FORTRESS

Later that day, I wrote two additional verses and set it to music. There have been countless times since then that I have resorted to that hymn when I have been in need of self-examination or strengthening of my faith. Facing the darkness of some anxious situation, I have asked myself if I could affirm that “Jesus lives in me” on the basis of my past experience, my present recognition of God’s presence, or my expectation of future help. And the longer I live, the more I believe it is likely to be all three.

Psalm 91 has served that same purpose for the Psalmist and countless others confronted with anxiety or fear. It is both an affirmation of faith and a constant reminder that God is with us in our extremity. Some scholars believe that, although the theme is similar to that of our psalm of last week, Psalm 90, this seems to be the expression of a man in or approaching seniority, while Psalm 91 is much more a youthful expression.

The writer of Psalm 91 speaks of what God will do: “For he will deliver you from the snare of the fowler and
from the deadly pestilence; he will cover you with his
pinions, and under his wings you will find refuge”
(91:3,4). Psalm 90 addressed mostly the troubles and divine help that the psalmist and nation had already experienced. But 91:5-13 is assurance that God will be their refuge in times to come. ‘FROM’ AND ‘IN’

As young people we testify, as in my hymn, to a faith that we anticipate we will experience when we are besieged by troubles. But as we grow older, we realize that our faith in God’s providence cannot be cut-anddried. There have been times when we have sought God’s help and he saved us from a “fiery furnace” type of danger. But we also know there have been and probably will be more times when the help that God has provided has not been to escape an ordeal, but with his help to see it through. Even if this crisis costs us our life, it does not have to separate us from our God.

The language of this psalm is poetic, rather than factually descriptive: “my fortress,” “the snare of the fowler,”
“with his pinions,” “a shield and buckler,” “the arrow that
flies by day,”
and so forth. The variety of expressions illumines the innumerable situations in which we turn to God for help, either to get us “out of” or “through.” Remember, at the temptation of Jesus in Luke 4:10,11, the Tempter alludes to Psalm 91:12: “On their hands
they will bear you up, lest you dash your foot upon a
stone.”
But that was a mistake on Satan’s part, for in recalling the scriptures, Jesus found the rebuttal he needed: “It is said, ‘You shall not tempt the Lord your
God.’ ’’
Then, Luke says, the devil “departed from him
until an opportune time.”

When you walk through the darkest of valleys, remember the Psalmist’s words: “When he calls to me, I
will answer him; I will be with him in trouble, I will rescue

him and honor him.With long life I will satisfy him
and show him my salvation.”
God promises us light, not just at the end of the valley, but also in the midst of it and beyond.